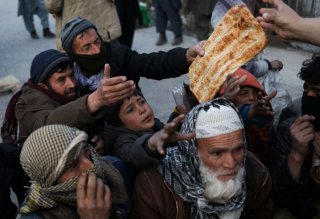 Last week, the Biden administration announced it will redistribute $7 billion in frozen assets that belong to the Afghanistan Central Bank, giving half to a trust fund supporting relatives of victims of the September 11, 2001, attacks and the other half to a trust fund to support the humanitarian needs of the Afghan people. By redistributing funds from one of the poorest countries in the world to victims of terror in one of the wealthiest, Biden can take on a new moniker: Robin Hood in Reverse.

This move will lead to Afghanistan’s economic ruin by making its currency worthless and provoking more price spikes in an already cash-strapped economy. As the currency continues to plummet, the country will be moved further into further poverty and chaos generating the worst humanitarian crisis of our time. This not only hurts Afghans, but it also directly undermines U.S. foreign policy interests by creating the ingredients for regional instability.

By handing half of the reserves over to aid agencies, the United States is ensuring long-term dependency on aid but also giving these funds to the very agencies whose grand plans over the past twenty years contributed to state collapse.

This move also is another harsh blow for America’s reputation, as it reminds the world once again of American incompetence during the withdrawal. It leads us to wonder whether Biden has personal animus towards Afghanistan. His previous public postures on Afghanistan are riddled with malice, yet not anchored in a coherent strategy. At every opportunity, he has spoken with unparalleled cruelty about Afghanistan and its people. His disdain was on display in April when he announced the withdrawal of troops. It was even more evident during a serious of speeches in August when he spoke without remorse about the haphazard U.S. withdrawal.

With the confiscation of the entire assets of the Afghanistan Central Bank kept in New York, this cruelty took a dark turn that not only has ramifications for Afghans, but also for the way the United States is perceived as a reliable partner among countries in the region who will have to bear the brunt of the crisis in Afghanistan and beyond.

There were very good reasons to freeze these funds in August when there were rumors swirling that former President Ashraf Ghani had left the country with $169 million and that the previous central bank leadership depleted reserves. These assets include gold, currency, and bonds, but they also consist of deposits owned by the people of Afghanistan—the savings of millions who are owned by the Afghan Central Bank. Many Afghans, including those who are now living in the United States as refugees, have life savings that are now being given to 9/11 victim families. So many of the Afghan families hurt by this order are the very people that have fought alongside the United States and sacrificed so much to combat the Taliban.

The United States should have one clear foreign policy objective in Afghanistan: strengthen the resilience of the Afghan people. The United States should understand by now that neither the Taliban nor humanitarian aid and assistance will bring prosperity to Afghanistan. The road to stability in Afghanistan will not be through Kabul but lies in the ability of its communities to persevere and to find ways to fend for themselves when the state cannot or will not. So much has been asked of these communities over the past forty years of war.

Afghanistan’s future prosperity lies not with the Taliban in the Afghan people’s ability to generate enough prosperity to fend for themselves. Throughout most of modern Afghan history, the state has been the primary driver of instability and chaos. That trend is continuing unabated.

Afghans’ ability to support their own well-being was decimated by the Biden administration’s decision. By robbing the country of its liquidity, the U.S. government is damaging the ability of the country’s entrepreneurs to stand on their own. Without access to finance and a stable currency, the economy is certain to collapse even further. Afghanistan is not suffering because it lacks humanitarian aid, but because it does not have access to money that fuels its economy. The key to getting Afghanistan back on its feet is unfreezing the country’s assets and sanctions relief. While lifting sanctions is a long way off (and should be given the government’s behavior), unfreezing the assets can help Afghans care for themselves. There are ways to do this without recognizing the Taliban government.

By handing half of the country’s currency reserves to aid agencies, the Biden administration ensures Afghanistan remain in a vicious cycle of dependency. Swapping money that could serve to strengthen the economy for donor assistance only reinforces the worst maladies of the past twenty years. They will remain dependent upon a rentier economy that tethers them to expensive NGOs, contractors, and international organizations who will funnel so much of those resources out of the country to pay for their own staff and overhead. Some argue that this move will have a devastating effect on Afghanistan’s agricultural sector as aid crowds out agricultural production, undermining the country’s resilience to future crisis.

Finally, at a time when the United States is learning that its alliances are more important than ever, this decision undermines U.S. relations with Afghanistan’s neighbors. Many of these neighbors stood behind the U.S. intervention over the past two decades but grew cold to it after the intervention seemed to spark regional instability. For example, U.S. strategic partner Uzbekistan warned that there were dire security risks of failing to prevent a humanitarian crisis in the country. Uzbek foreign minister Abdulaziz Komilov last week said that getting Afghanistan back to economic health was the most important way to build stability in the region.

The weakness of Afghanistan’s economy becomes another recipe for regional instability. The wealth generated by Afghans over the past two decades and the country’s currency, upon which these reserves depend, are the foundations of future stability. Biden should know by now that aid neither builds effective states nor is an effective band-aid to solve this crisis. The people of Afghanistan could solve this crisis, if only they had the power to do so. What the world may not see is a talented entrepreneurial class that wants to use this lull in fighting to build and create. Sadly, both the United States through this move and the Taliban, through its authoritarianism, are robbing them of the opportunity to pave their own way.

The Taliban remain a pariah. Their regime should not be recognized. The regime’s honeymoon period is coming to an end. By arresting women’s activists and foreign journalists, it is stamping out the last few sources of independent civic space. As it consolidates its rule, it will only rely more on coercive force. Without an economic means to fight back, Afghans will remain dependent and desperate.

Jennifer Brick Murtazashvili is the Founding Director of the Center for Governance and Markets and an Associate Professor in the Graduate School of Public and International Affairs at the University of Pittsburgh, a Nonresident Scholar at the Carnegie Endowment for International Peace, and the President of the Central Eurasian Studies Society.