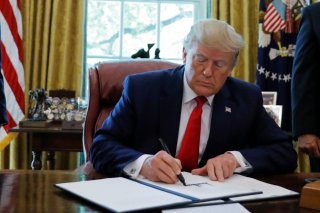 The Biden administration stands poised between diplomatic victory with Iran and disaster. It has been more than a month since multilateral negotiations in Vienna broke amid a celebratory mood, with the text of the nuclear agreement all but finalized. But the thorny bilateral issues that remain constitute a key part of the trap set for President Joe Biden by the Trump administration. If the president does not move decisively to break the stalemate and save the nuclear deal, a largely symbolic designation may sink Biden’s Iran policy and push the United States and Iran toward a devastating military conflict.

The main issue at hand is the Foreign Terrorist Organization (FTO) designation of the Islamic Revolutionary Guard Corps (IRGC), which was enacted by the Trump administration in April 2019 and which Iran has demanded be removed in any nuclear deal. It would be difficult, if not impossible, for any Iranian political leader to sign off on a deal that leaves the IRGC in the same category as non-state actors like Al Qaeda and ISIS. The Biden administration has appeared to waffle on its willingness to rescind the designation while pushing for non-nuclear de-escalatory concessions in exchange for the delisting, with no visible progress for several weeks. As such, a stalemate has set in, with the Biden administration appearing to fear the political costs of reaching the finish line.

The FTO designation was hugely controversial under Donald Trump. Iran was still complying with the nuclear deal months after the United States had unilaterally withdrawn and snapped back sanctions. U.S. and Iraqi Shia militias supported by Iran had been operating in close proximity in Iraq to retake ISIS-held territory, with a tentative truce still holding. Senior military and intelligence officials warned that designating the IRGC as terrorists would break that truce and directly threaten U.S. troops and personnel, and cautioned against the move.

Many who would go on to become key officials in the Biden administration also recognized the danger at the time. Biden’s Secretary of State Antony Blinken penned an op-ed in the New York Times warning about the risks of an FTO designation of the IRGC in 2017, noting that prior administrations declined to designate the IRGC because “the potential blowback outweighed the benefits” and could push the United States and Iran toward war. Blinken warned, with a high degree of accuracy, that the IRGC would respond by pushing Iran to withdraw from the nuclear agreement, unleash its militias against U.S. forces in Iraq, and go after ships in the Persian Gulf. Likewise, National Security Action—led by now-National Security Advisor Jake Sullivan and former Obama advisor Ben Rhodes—condemned the designation as “another dangerous and self-defeating tactic that endangers our troops and serves nothing but the Trump administration’s goal of destroying the Iran deal, which is all that stands in the way of Iran’s pursuit of a nuclear weapon.”

Despite the well-founded concerns, Trump ignored these military and intelligence officials. Opponents of Iran diplomacy urged the White House to designate the IRGC as an FTO as part of a strategy to block a Democratic successor to Trump from restoring the JCPOA. They found allies in Mike Pompeo and John Bolton, who convinced Trump to ignore the warnings of security officials and dial up the pressure to ten.

The defense and intelligence community’s concerns, along with those of current Biden administration officials, proved prescient. Iran began to halt its compliance with the nuclear deal a few weeks after the designation, strikes on U.S. positions in Iraq skyrocketed, international oil tankers were struck in sophisticated operations attributed to the IRGC, and Saudi Arabia’s oil facilities at Abqaiq were struck with cruise missiles. Iran had matched America’s economic war with a shadow war of its own, which nearly boiled over into full-blown war when Iran downed a drone in June 2019 and when the Trump administration assassinated Iran’s famous general Qassem Soleimani in January 2020.

Now, with the nuclear deal all but resolved except for the FTO sticking point, inertia risks setting in. The Biden administration can and should see if any non-nuclear concessions can be secured from Iran in exchange for the delisting. But it would be a profound mistake to choose a Trump-era designation that ignited the shadow war between the United States and Iran over the Obama-era accord that safeguards against the twin threats of a nuclear-armed Iran and war with Iran over its nuclear program. After all, even if the FTO designation is removed, the IRGC will remain sanctioned six ways from Sunday. It would remain a Specially Designated Global Terrorist (SDGT), and subject to a plethora of other sanctions addressing human rights abuses, missiles, and election interference. The FTO added almost nothing in terms of additional pressure and was a major net-negative for regional security. It isn’t a major concession to remove the FTO designation and may even serve U.S. interests

Still, the administration risks letting politics stand in the way of policy. Republicans have been just as inflexible as they were in 2015, with the exception of Sen. Rand Paul (R-KY) who has criticized his own party’s hostility to diplomacy with Iran. A handful of Democrats have joined them in an ill-advised campaign to pressure Biden against making the kinds of concessions he will need to make to roll back Iran’s nuclear program. But the vast majority of the Democratic party wants this deal back and quickly, well before the midterm elections. As Sen. Chris Murphy (D-CT) urged the administration, “If there’s a good deal on the table ... the Biden administration has to sign that deal. Let us do the work of selling that deal in Congress. We’ll get it done, we’ll get the votes for it.”

A good deal has been drafted and appears to be on the table. The political fight on the deal will be won, as Democrats control each chamber and the vast majority support the agreement. But it will take political will to reach the finish line. Biden will have to remove one last shackle put on him by Trump in order to save the deal and avert a march to war. He should do it while he still has the chance.