Inside the Trump Administration Push To Kill Iranian General Soleimani 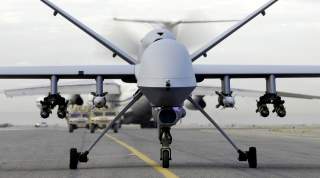 President Donald Trump ordered U.S. forces in Iraq to kill Gen. Qassem Soleimani, the top Iranian commander in the country, in an irreversible escalation against Iran on Thursday.

Top administration officials had consistently pushed for more aggressive actions against the Iranian-led coalition in the Middle East, but Trump himself was reluctant to escalate. Recent clashes between U.S. and Iranian-backed forces in Iraq allowed hawks to push the President to take a harder line—perhaps escalating beyond the point of no return.

Foreign policy hawk and Trump ally Sen. Lindsey Graham (R–S.C.) claimed that he has been briefed on the plan to kill Soleimani, although other congressional leaders said they had not. The Trump administration leaned on “force protection” as its legal grounds for carrying out an act of war without congressional approval.

“At the direction of the President, the U.S. military has taken decisive defensive action to protect U.S. personnel abroad by killing Qasem Soleimani,” the Department of Defense said in a Thursday night statement. “General Soleimani was actively developing plans to attack American diplomats and service members in Iraq and throughout the region.”

The U.S. Embassy in Baghdad warned all U.S. citizens in Iraq to evacuate the country a few hours later.

The assassination followed months of attempts to push counter-ISIS forces into a counter-Iran mission, as the National Interest first reported in October.

The Department of Defense pointed to Soleimani’s responsibility for arming and training Iraqi militias that killed hundreds of U.S. troops after the 2003 invasion of Iraq. Soleimani’s assassination came immediately after several attacks by Iraqi militias over the past two weeks.

Kata’ib Hezbollah, an Iranian-backed militia, had allegedly wounded several U.S. troops and killed an American employee working on a military base in Iraq by firing rockets at them on December 27. U.S. forces killed dozens of Kata’ib Hezbollah members in retaliation two days later. Kata’ib Hezbollah supporters responded by ransacking the U.S. Embassy in Baghdad on New Years Eve.

But directly killing an Iranian general in response to proxy attacks was a step further than anyone had expected.

Iraqi Prime Minister Adil Abdulmahdi stated after Soleimani’s killing that U.S. actions “violate the conditions governing the presence of US forces in Iraq.”

“I think this is a delicate balancing act indeed for interventionists in government,” wrote Faysal Itani, deputy director at the Center for Global Policy, in an email three days before Soleimani’s death. “They have lofty goals against Iran especially in light of what they inherited in 2017 but if they overreach or trigger an unwanted escalation they may find themselves even more constrained by the president’s isolationist instincts.”

“Their best bet is to squeeze the Iranians as much as possible through US economic and diplomatic pressure without taking any actions that could be construed (by the president!) as directly provoking a war,” Itani, who has repeatedly briefed the U.S. government, told the National Interest in an email. “Instead the ideal situation is to squeeze Iran so that the Iranians themselves take actions that justify US retaliation, and then squeeze more, and so on.”

It is unclear whether these sanctions had prompted Iranian-backed militias to escalate their campaign of rocket attacks, which had started months earlier, but grew more brazen in mid-December.

“These people around the President are very aware that the maximum pressure campaign that they have, which has so far been maximum economic pressure, needs to be extremely rigorous in order to force a decision point on the Iranian regime before the elections happen,” said Matthew Brodsky on December 31.

Trump officials believed that Iran’s strategy was “to wait out the clock so that Trump doesn't get re-elected” and a Democratic president returns to Obama-era diplomatic arrangements with Iran, according to Brodsky.

Brodsky, a senior fellow at both the Gold Institute for International Strategy and the Security Studies Group, had interacted with the White House team on national security issues.

“The reaction you’re seeing from Iran is somewhat predictable, and would be expected,” Brodsky added. “That’s the way the game is played. They’re lashing out. Unfortunately, from my perspective, we haven’t had a robust enough kinetic response to their kinetic attacks.”

Asked on Thursday night whether he knew about the plans to kill Soleimani in advance, Brodsky simply replied with a closed-mouth emoji.

The campaign of escalation against Iran began soon after Mike Pompeo became Secretary of State in April 2018. The next month, Trump withdrew from an Obama-era agreement regulating the Iranian nuclear research program, and imposed sanctions on the Iranian economy. Pompeo increased the sanctions to “maximum pressure” in April 2019.

U.S.-Iranian tensions nearly broke out into open war in July, when Iranian forces shot down an American surveillance drone over the Persian Gulf. Trump ordered an attack, but cancelled it at the last minute.

But the maximum pressure campaign seemed to collapse after a missile attack on a Saudi oil refinery in September. U.S. officials blamed Iran, and Trump hinted at a violent response, but none came.

But recent protests in Iran and Iraq—which Iranian security forces and Iranian-backed militias killed hundreds to suppress—breathed new confidence into hawks within the Trump administration.

Brian Hook, the State Department’s Special Representative for Iran, declared that the Iranian government’s legitimacy had shrunk to a “handful of clerics.”

The President continued to swing towards reconciliation, even while keeping a retinue of hawkish officials. Trump approved a prisoner exchange with the Iranian government in December―reportedly against Hook’s objections—and told reporters on New Years Eve that both he and Iran want “peace.”

The next step depends, in large part, on Iran’s retaliation. Iranian commanders control militias across Iraq, Syria, and Lebanon, allowing them to target U.S. interests short of war. “We promise that the price for this crime will be no less than the removal of American presence from Iraq and the region,” vowed Kata’ib Hezbollah, in a statement on Iraq’s Afaq TV.

But the Trump administration may take any response at all as a reason to escalate.