Why Is Trump Doubling Down on the Threat of War Against Iran? 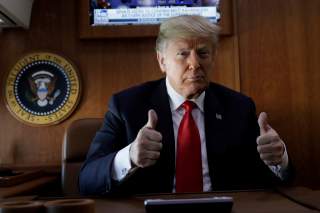 Trump has been losing interest in the Middle East, but his State Department is still committed to a campaign of “maximum pressure” to isolate Iran. Now, that the campaign has provoked renewed Iranian reactions, Trump administration officials are emphasizing Iran’s internal problems as evidence that the country is close to collapse.

“The Iranian regime keeps losing major constituencies in its revolutionary base,” said Hook, the State Department official in charge of Iran, at a Thursday press briefing. He claimed that the only base of support left for the Iranian government was a “handful of clerics.”

When asked twice whether U.S. policy had shifted from “changing the regime’s behavior” to regime change, Hook did not answer.

“The policy hasn’t changed,” Deputy Assistant Secretary Leonid Khodorkovsky told a National Interest reporter on the way out of the briefing room. “Nice try, though.”

Last month, protests erupted in Iran over a gas price hike. The government shut down the Internet and cracked down with deadly force. The New York Times estimates that 180 to 450 people were killed. Amnesty International has confirmed 208 deaths. Hook, however, speculated that the Iranian government could have killed a thousand people.

At a NATO meeting on Tuesday, reporters asked Trump whether the United States supports the Iranian protesters.

“I don't want to comment on that. But the answer is no,” Trump responded.

“The question was asked do we support them, I thought, financially,” he later clarified. “But we support them very very seriously—the people that are protesting in Iran. They’re looking for their freedom, and we are fully in support of them.”

“I just flew in from being with the President in London where in each of the meetings we had one of the central topics was how to create Middle East stability,” Secretary of State Mike Pompeo said during a meeting with Israel’s prime minister on Wednesday. “There are anti-Iran protests taking place in Baghdad, anti-Iranian protests taking place in Beirut, and we all know what’s going on in Iran.”

Hook then called for a surprise press conference on Thursday morning. He announced that the State Department had learned about a massacre in Iran, repeating information that the New York Times had already reported last week.

In November, Iranian security forces chased protesters into a marsh outside the city of Mahshahr and surrounded them with machine guns. The security forces gunned down up to one hundred people, and only released the bodies after the victims’ families pledged not to hold public funerals, as both the New York Times and Hook reported.

“This is the worst political crisis the regime has faced in forty years,” Hook said, mentioning that nine Shi’a Muslim seminary schools were burned during the unrest.

“Now is the time for all nations to stand with the Iranian people,” Hook said, announcing U.S. economic sanctions against two prisons in Iran. “The Iranian people want the regime to invest in people, not proxies.”

Iran is continuing to build up a frighteningly sophisticated forces of missiles and militias across the Middle East to deter the United States and its partners, and it has ramped up the pressure over the past few days.

Iranian forces have been moving missiles into Iraq, as CNN and the New York Times reported on Wednesday afternoon and Thursday morning, respectively. Hook announced that the Navy also intercepted an illegal shipment of apparent Iranian missiles to anti-Saudi rebels in Yemen this week.

In October, Trump began to withdraw U.S. forces from Syria, but acquiesced to a plan by Iran hawks for an even bulkier U.S. presence in the oil-rich eastern region of Syria.

Now, the Trump administration is considering moving fourteen thousand more troops and dozens of ships into the Middle East to counter Iran, the Wall Street Journal reported. The move would double the U.S. presence in the region.

Hook did not address the Wall Street Journal report, but portrayed the Iranian moves as a desperation gambit to save a collapsing alliance. He called the missile shipment “proof of Iran’s efforts to inflame conflicts in the region,” citing a recent offer by the Houthis to stop missile attacks on Saudi Arabia.

“Iran clearly does not speak for the Houthis,” Hook said. It was a stunning reversal from September, when Hook wrote about Iran “controlling and deploying” the Houthis as a “terror front.”

But Hook did not indicate any moves to peel the Houthis out of Iran’s orbit at the Thursday press conference. Instead, he announced a $15 million counterterrorism reward for Iranian military commander Abdul Reza Shahla’i.

Shahla’i allegedly conspired with his American cousin to assassinate the Saudi ambassador in Washington in 2011, and had previously supplied militias in Iraq that killed U.S. soldiers. Hook said that Shahla’i is now based in Yemen.

“This designation, together with the recent interdiction in Yemen, underscores our commitment to deny Iran the means to run an expansionist foreign policy,” Hook said. “We call on the international community to join us.”