Trump Versus Macron: Will France Take Back Its Dangerous ISIS Fighters? 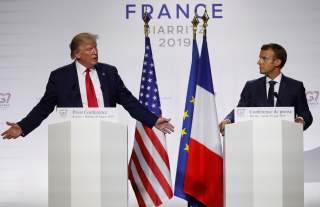 President Donald Trump and French president Emmanuel Macron sparred today over the fate of European members of ISIS who continue to languish in prison camps in Syria—and are in danger of escaping in the middle of a war between Turkey and the Syrian Kurds.

“We have a tremendous amount of captured fighters, ISIS fighters, over in Syria,” Trump said at a joint press conference. “Would you like some nice ISIS fighters? I can give them to you. You can take everyone you want.”

“Let’s be serious,” Macron shot back. “It is true you have current fighters coming from Europe. But it's a minority of the overall problem we have in the region. And I think number one priority because it’s not yet finished, is to get rid of ISIS.”

The Kurdish-led Syrian Democratic Forces (SDF) are holding an unknown number of foreign ISIS fighters. Tens of thousands of foreigners are sitting in one prison—the infamous Al-Hawl Camp—alone. European countries have been slow to take back their citizens. But as the war between Turkey and the SDF threatens to engulf the SDF’s prisons, the countdown is on to stop a wave of ISIS escapees with European passports.

The Trump administration says it has taken back twenty-three Americans from Syria and Iraq, but the SDF says it has no agreement with Europe to deal with suspected ISIS members.

Turkey attacked the SDF with a Trump administration green light on October 8, unleashing chaos in Northeast Syria. In its statement approving the Turkish operation, the White House complained that European countries were refusing to take back ISIS members.

Around two hundred ISIS men and eight hundred ISIS women and children escaped in the first few weeks of the military campaign, according to a recent joint report to Congress by the Pentagon, State Department, and U.S. Agency for International Development.

The Rojava Information Center, a collective of journalists based in northeast Syria, has documented several more recent violent incidents and escapes from Al-Hawl Camp, including a mass breakout by six ISIS women on November 19 and a murder on November 31.

Europeans are only a small percentage of ISIS members but they are a radioactive problem for counterterrorism authorities.

“European governments have been reticent to receive their citizens from Syria, largely due to concerns regarding their ability to successfully prosecute those suspected of ISIS ties,” the congressional report said. “However, the SDF has warned that it could not indefinitely hold thousands of ISIS prisoners in detention centers across northeast Syria.”

Syrian Kurdish diplomat Sinam Mohamad told the National Interest on December 3 that the European Union has “agreed to get the children back.” But she said there is “[n]o agreement so far” on former fighters or other adult prisoners.

Two weeks ago, Britain took back a group of children whose parents had brought them to Syria. But the British authorities have also stripped citizenship away from adult ISIS members, making it difficult to bring them back. Britain and France have both implied that they will only take back orphans.

In 2016, over four thousand ISIS foreign fighters were from European countries. It is unknown how many of them are among the tens of thousands of prisoners of war today.

Ilham Ahmed, executive president of the SDF’s political wing, told the National Interest on October 2 that there was no accurate count of the number of Europeans and Americans at Al-Hawl Camp.

“There are some orphans who were given to the U.S. government. I don't know the total number of American detainees we have,” Ahmed added.

“No one has exact numbers on that, but the Americans make up a very small percentage of both Western [foreign fighters] and overall [foreign fighters],” said Azadeh Moaveni, a senior gender analyst at the Crisis Group. “The bulk of those who are not from the West are from North Africa and the Caucuses.”

At first, the United States dragged its feet on repatriating its small cadre of ISIS members. One American citizen walked free after the U.S. military tried to hold him without trial. But the Trump administration has recently made a public show of repatriating Americans and putting them on trial.

“The United States leads by example on this issue,” a State Department spokesperson told the National Interest. According to the spokesperson, the U.S. government has taken back fifteen minors and eight adults, six of whom were charged with criminal offenses.

The SDF insists that it can put the fighters on trial itself—as long as they receive international support.

“We want to put them on trial in our areas because all the witnesses are in our hands. We don't want anyone to escape from accountability,” Ahmed said. “We are afraid that if we send people to Europe, and they don't arrest them due to lack of evidence, one of these criminals will meet one of their victims in Europe.”

“We will surrender the fighters after we sentence them in our own court system,” she concluded.

But there may not be enough time, with the war straining the SDF’s resources to the brink.

The State Department added in the joint report to Congress that “a proposed solution of establishing an international tribunal to try ISIS detainees as an alternative would not solve the core problem, mainly because a tribunal would take years to bring the large number of ISIS suspects to justice.”

“[T]he most effective way to ensure accountability and prevent ISIS fighters from going free is for countries to take back and prosecute their citizens for crimes, rehabilitate and reintegrate where appropriate, and monitor for future ISIS activity,” the State Department insisted.

Matthew Petti is a national security reporter at the National Interest and a former Foreign Language Area Studies Fellow at Columbia University. His work has appeared in Reason, America Magazine, and the Armenian Weekly.