Kurdish Officials Had No Advance Notice of Trump’s Syria Announcement 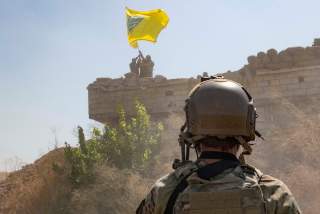 “No body told us about this,” said Sinam Mohamad, the Syrian Democratic Council’s diplomat in Washington, in a text message. “We did not expect that this will happen because we [fulfilled] all the agreement points about the” safe zone.

“We show more flexibility to avoid the war,” she told the National Interest.

According to Bassam Ishak, another Syrian Democratic Council diplomat, the group is now talking to “official channels in the U.S. and in Europe.”

“Turkey will soon be moving forward with its long-planned operation into Northern Syria. The United States Armed Forces will not support or be involved in the operation,” the White House said in a statement, shortly after a phone call between President Donald Trump and Turkish president Recep Tayyip Erdoğan. “Turkey will now be responsible for all ISIS fighters in the area captured over the past two years in the wake of the defeat of the territorial ‘Caliphate’ by the United States.”

“United States forces, having defeated the ISIS territorial ‘Caliphate,’ will no longer be in the immediate area,” the statement read.  It remains unclear whether the Trump administration intends to withdraw all U.S. troops from Syria.

The SDF, a U.S.-backed coalition of Kurdish, Arab, and Assyrian fighters, runs a prison camp at al-Hawl for the former ISIS members they captured. But the National Interest has learned that the SDF was never informed of the White House decision.

“The SDF is unlikely to hand [the ISIS prisoners] over willingly,” said Elizabeth Tsurkov, a Foreign Policy Research Institute fellow who has visited SDF-controlled areas. “I think Erdoğan made the pitch about the ISIS families and prisoners because he knew it was a great frustration for the administration due to the refusal of other countries to take back their radicals.”

The White House statement complained that “[t]he United States Government has pressed France, Germany, and other European nations, from which many captured ISIS fighters came, to take them back, but they did not want them and refused.”

The SDF is struggling to deal with the seventy thousand prisoners at al-Hawl, who are turning the camp into an ISIS mini-state. Syrian Democratic Council Executive President Ilham Ahmed told the National Interest that she would like European countries to help pay for the prisoners’ trials.

Brett McGurk, the former special presidential envoy in charge of the counter-ISIS mission, told an audience at the Brookings Institution on September 10 that al-Hawl is now “jihadland.”

“President Trump’s decision completely blindsided U.S. officials. The current situation is chaos, as the U.S. military has no idea what will follow,” said Center for a New American Security fellow Nicholas Heras, who has advised U.S. counterterrorism officials and observed SDF operations inside Syria. “U.S. military forces that are on the ground actively implementing the counter-ISIS campaign are still under the impression that their mission has not changed.”

Heras told the National Interest that the incident could be a “flash in the pan” like the December 2018 decision to leave Syria, which was halted by Trump administration infighting. But he stressed that this “chaos policymaking” leaves the future uncertain.

“[I[f Turkey does anything that I, in my great and unmatched wisdom, consider to be off limits, I will totally destroy and obliterate the Economy of Turkey,” Trump added in a Monday morning statement on Twitter.

Under the safe zone agreement, the SDF agreed to destroy its fortifications along the border and allow some joint U.S.-Turkish patrols on the Syrian side, in exchange for U.S. protection from an all-out invasion.

Turkish leadership considers the SDF an extension of the Kurdish separatist movement inside Turkey, and has signaled that they may invade regardless of the safe zone. After his phone call with the U.S. president, Erdoğan said that U.S. forces will begin withdrawing from the border.

Eyewitnesses told the New York Times that U.S. forces in Syria are already beginning to leave their posts.

In the hours leading up to the announcement, Tsurkov talked to the National Interest about reports that Turkish troops and Turkish-backed Syrian rebels were beginning to mass at the border.

“I think only Erdoğan knows” whether a Turkish invasion is coming, she said. “U.S. officials are very worried and they are in contact with him. I think we’re closest to an invasion we’ve been since the last invasion that did happen.”

In January 2018, Turkish forces crossed the border to attack the SDF-held enclave of Afrin, where there were no U.S. troops. Turkey handed the territory over to Turkish-backed Syrian rebels by March 2018, but an insurgency rages on.

The United Nations estimated in April 2018 that 137,000 out of 287,000 inhabitants had been displaced. By September 2018, the Syrian Observatory for Human Rights claimed that 300,000 people had fled or been forced to leave Afrin due to an atmosphere of “persecution, arrest, looting, and robbery.”

The SDF has signaled that it will fight even harder than in Afrin, warning that it will wage an “all-out war” to stop Turkey.

Autonomous Administration Vice Co-Chair Elizabeth Gawria had briefed the National Interest on the consequences of a Turkish invasion a week before.

“I stress that our priority is a political solution and dialogue with Turkey,” she said at an October 2 press roundtable at the Syrian Democratic Council office in Washington. But the Syriac Christian official claimed that the people of northeast Syria are ready to resist any invasion.

“Despite the military siege, the terrorist threats, the economic threats, the political threats, we have done it. We control one third of Syria, thanks to our daughters and sons who have sacrificed their lives,” Gawria told the reporters at the roundtable. “We have self-defense, we have a project that is based on pluralism, a project of Syria for all. In order to attain our rights, we should sacrifice.”