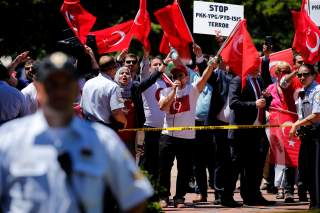 Turkey is provoking a political civil war in Washington, DC. With Turkey’s president Recep Tayyip Erdoğan scrambling up the regional balance of power, U.S. officials don't know how to deal with their once-stalwart North Atlantic Treaty Organization (NATO) ally. Liberals and conservatives, hawks and doves—none of the old categories apply.

On one side, an unlikely coalition of evangelical Christians, left-wing human-rights activists, and War on Terror veterans think Turkey is more trouble than it's worth. On the other side, Cold Warriors and State Department insiders are warning against a messy divorce. And on a shoestring budget, Turkey's Kurdish rivals have managed to present themselves as a better alternative to the second-largest army in NATO.

Tensions are coming to head, with Turkey threatening this weekend to attack the U.S.-backed forces in Syria.

The government of Turkey spent nearly $6.6 million on U.S. politics in 2018, not counting the cost of maintaining an embassy, according to data published by the Center for Responsible Politics. Foreign Agent Registration Act (FARA) filings show that the Syrian Democratic Council’s diplomatic office in Washington was operating on an annual budget of under $120,000, including the cost of running the office.

“My general feeling is in DC, people really don’t know what to do with Turkey,” said Hişyar Özsoy, a member of Turkish parliament who addressed the Congress last month.

The debate over Turkey is a glimpse of what U.S. foreign policy will look like in an increasingly multipolar world. As the United States is forced to prioritize between friends, interests, and values, different factions in Washington have their own ideas of America’s role.

“A lot of the senior leadership at the professional level in the State Department particularly have a long institutional memory of engaging with Turkey as a clear NATO ally, and as a country that served broader U.S. geopolitical objectives, particularly vis-a-vis the Soviet Union,” explained Center for a New American Security fellow Nicholas Heras. “The rising generation of leaders in the Pentagon—those officers who served in Iraq and Afghanistan—have had mixed experiences with the Turks.”

Officials, researchers, and activists have quietly grumbled about the split for awhile, but over the past month, a series of high-profile meetings between Kurdish leaders and U.S. policymakers coincided with public debates by a range of former State Department, Pentagon, and White House officials.

The public got a rare look at the inner debates of the so-called foreign-policy “blob.”

Missiles and Coups and Bears—Oh My!

During the Cold War, Turkey was the tip of the American spear pointed at the Soviet Union. Now that the communist threat is gone, however, Turkey doesn’t have much of a reason not to work with Russia—except for U.S. objections.

Under the Countering America’s Adversaries Through Sanctions Act (CAATSA) of 2018, the president is supposed to sanction any country that buys military equipment from Russia. Turkey triggered the act earlier this year when it bought S-400 anti-aircraft missiles from Russia.

“There is no well of sympathy in Congress for Turkey” anymore, said retired Ambassador Eric Edelman at a September 19 panel discussion at the Johns Hopkins University. While there used to be a forty-person pro-Turkey caucus in Congress, he claimed, the S-400 incident has left only “degrees by which you want to punish Turkey.”

President Donald Trump has kicked Turkey out of the F-35 fighter jet program, but he has carefully delayed CAATSA sanctions. And although Congress has expressed annoyance with the lack of sanctions, the bipartisan group of frustrated lawmakers has not been able to force Trump to act.

Edelman believes that Erdoğan was fixated on buying the S-400 because it can shoot down the types of American-made fighter jets that were used in a July 2016 military coup d’etat attempt: “We tend to think, since 2016, that another coup is out of the question. I don’t think he does.”

“This is not going to snap back even if Erdoğan departs the scene,” Edelman warned, because the leader’s supporters have “just injected a toxic blend of anti-Americanism, antisemitism, and nationalism into the body politic.”

“A lot of this of course has to do with Erdoğan and other things, but there’s also another reality,” said Trita Parsi, executive vice president of the Quincy Institute, in an interview with the National Interest. “Turkey is no longer in the mood of just being a pliant ally of the United States that constantly has to adjust its interests and its demands and its preferences to whatever the U.S. decides. The U.S. is no longer capable of being this hegemon of the region.”

As Erdoğan said at the United Nations in New York on September 24, “the world is bigger than five.” He was referring to the five permanent members of the Security Council: Britain, France, Russia, China, and America. Perhaps he wants it to include a sixth.

But he also has a short-term reason to pivot away from the United States. Russia is now entrenching itself in Syria.

“The perception that we’re pulling out and Russia is here to stay is not just Erdoğan,” Edelman claimed. “[Israeli prime minister] Bibi Netanyahu has been to Moscow more than he’s been to Washington in the past four years.”

At the moment, the U.S. presence in the Middle East depends on İncirlik Air Base, a military airport in southeastern Turkey. “If you ask most people at the Pentagon, most people will say that İncirlik is still valuable to the U.S. strategically,” Makovsky claimed.

In recent decades, Turkey has shown its strength in and around the base. Makovsky, who worked as a State Department liaison officer at İncirlik in the 1990s, said that “you’re constantly reminded that it’s not an American base.” During the 2016 coup attempt, loyalist forces besieged the base in order to capture some of the coup plotters inside.

The base also hosts fifty tactical nuclear weapons. Ploughshares Fund president and nonproliferation expert Joe Cirincione told the National Interest that the hydrogen bombs are there to reinforce the “extended deterrence guarantees” of the North Atlantic Treaty.

“Every time somebody like me asks to take them out, the claim is that our allies would feel that we were backing out of our defense commitments,” he said.

Under the Cold War treaty, the United States and its European partners are duty-bound to defend each other in times of war.

That hasn’t stopped NATO allies from clashing with each other. Turkey nearly went to war with Greece, another NATO member-state, over the island of Cyprus in 1974.

Some of Turkey’s fights with U.S. allies are unique to Erdoğan, though. The populist leader has sided with Qatar over Saudi Arabia in the Persian Gulf family feud. He has also made himself a champion of the Palestinians against Israel, publicly feuding with Netanyahu.

It’s a long slide from the 1980s, when Netanyahu was a young diplomat in Washington trying to shore up the Turkish-Israeli alliance against Palestinian and Armenian nationalism.

Rise of the Kurds

But a new generation of U.S. warfighters has driven the biggest wedge between Turkey and the United States.

“In the 90s, the U.S. basically followed Turkey’s example. Turkey was calling the shots, and the relationship was very warm, very cordial,” said American Kurdish Information Network (AKIN) founder Kani Xulam. “The Pentagon had no relationship with the Kurds, so to speak. Now the American generals go to Syria, for example, and they meet with Kurdish leaders, and they sit down and plan how to keep ISIS down.”

During the Cold War, the fight for Kurdish independence was mostly a left-wing cause. Leading guerrilla groups, such as the Democratic Party of Iranian Kurdistan (PDKI) and Kurdistan Workers Party (PKK) in Turkey, were either pro-Soviet or explicitly communist. Many of Kurdish nationalism’s opponents—including the Shah of Iran and Saddam Hussein of Iraq—were bulwarks against communism in the Middle East.

But in 1991 and 2003, the largest Kurdish parties in Iraq helped U.S. forces fight Saddam Hussein, who had attempted a genocide against the Kurds. Since 2003, Turkey has waged its own parallel campaign in northern Iraq aimed at hunting down the PKK—and later, shoring up the group’s Kurdish rivals.

“Some [American officers] served alongside the Turks in Afghanistan, but others remember how the Turks were, for much of the Iraq War, sort of a complicating factor,” explained Heras, who has advised U.S. counterterrorism officials on Syria. “For those who served in the counter-ISIS campaign, the Turks have been very adversarial.”

During the recent Syrian Civil War, an alliance of Kurdish, Assyrian, and Arab fighters called the Syrian Democratic Forces (SDF) has been the U.S.-led coalition’s most reliable partner against ISIS. Turkey considers the YPG—the main Kurdish component of the SDF—to be an extension of the PKK.

The PKK is officially designated as a terrorist organization by the U.S. government.

Gen. John Allen, formerly President Barack Obama’s envoy to the international anti-ISIS coalition and now president of the Brookings Institution, described the problems he had with Turkey in a September 10 panel discussion.