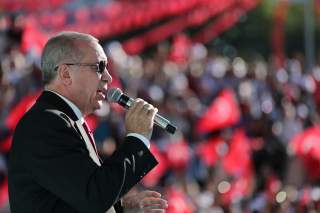 President Recep Tayyip Erdoğan, the populist leader of Turkey, hinted Wednesday night that he was interested in acquiring nuclear weapons. His speech was aimed at a nationalist audience at home, but the sudden talk of a Turkish bomb has rattled many of Turkey’s allies and neighbors.

“Several countries have missiles with nuclear warheads, not one or two. But we can’t have them. This I cannot accept,” Erdoğan said during a ceremony marking the centennial of the Turkish independence movement. “There is no developed nation in the world that doesn’t have them.”

The Turkish embassy did not respond to a request for clarification from the National Interest.

“If Turkey wanted to build a nuclear bomb, it could,” said Joseph Cirincione, president of the Plowshares Fund and former vice president for national security and international policy at the Center for American Progress. “It would take decades. It's not something that would happen overnight.”

“I think that kind of threat is real,” he told the National Interest. “I take it seriously, but it's not imminent.”

“We are aware of these reports. Turkey is a party to the Nuclear Nonproliferation Treaty and has a comprehensive safeguards agreement in force with the [International Atomic Energy Agency],” a U.S. State Department official told the National Interest less than forty-eight hours later. “It has accepted an obligation never to acquire nuclear weapons, and to apply IAEA safeguards to all peaceful nuclear activities. We attach great importance to Turkey’s continued implementation of these obligations.”

Every country in the world—except for India, Israel, North Korea, Pakistan and South Sudan—has signed the 1968 treaty against the spread of nuclear weapons.

The embassy of Armenia, which borders Turkey, did not offer any comment. But the Armenian National Committee of America, an Armenian diaspora organization that predates the modern Republic of Armenia, had choice words for Erdoğan.

“We have a long history of dealing with Turkish aggression, and also Turkish abuse against citizens of Armenian heritage within Turkey,” said Executive Director Aram Hamparian. “So, any time there's talk about a new weapon being added to the Turkish arsenal, that’s always a cause of very, very profound concern among Armenians worldwide.”

“The U.S. has remained silent, refusing to properly recognize the Armenian genocide, long after Turkey has stopped honoring any aspect of its previous understandings with the United States,” he continued. “Turkey walked away from the deal, and yet for some strange reason, there are elements of the U.S. government who still feel obliged to honor their side of the deal.”

Azerbaijan, a closely allied neighbor of Turkey and a rival of Armenia, was more positive about the Turkish role in the region.

“Turkey is an indispensable ally and contributes to regional stability. And we can say that Turkey is a cornerstone of regional security architecture,” said Vulgar Gurbanov, political counsellor at the embassy of Azerbaijan. "Concerning your specific question, I am not familiar with the context and content of the mentioned statement, and we don’t usually comment on individual statements.”

Soner Çağaptay, director of Turkish Research Program at the Washington Institute for Near East Policy, believes that Erdoğan’s comments were driven by “the general sense that this unipolar world order imposed by the U.S. is collapsing, a view held by many insiders of the governing Justice and Development Party, including Erdoğan.”

“It’s mostly rhetoric at this stage, and it's also signalling policy of ambiguity going forward, because given its sense of how the global order is ‘collapsing,’ [Turkey] probably wants to be in this zone where, if it decided to, it can go and get nuclear weapons,” Çağaptay told the National Interest. “Turkey has also been quite aggressive in pushing against Greece and Greek Cypriots in the Eastern [Mediterranean], lately, and I think this is also part and parcel of Erdoğan’s policy of sending signals to Athens.”

Çağaptay claimed that Greece had been trying to change the balance of power by allying with Israel, the only other nuclear-armed state in the region. (U.S. officials believe that Israel has secretly built at least two hundred nuclear warheads.) The Israeli embassy did not respond to a request for comment.

Aris Papageorgiou, press officer at the Greek embassy, told the National Interest that he has not “seen any official response from the Greek government on Erdoğan's statement.”

But he said that there are “every day usually some statements with all the violations of airspace that happen, the exploration teams that are going to the southeast Mediterranean regarding Cyprus, and some provocative statements from the Turkish government regarding the territorial issues of Greece, but these are on a regular basis.”

Rona Panteli at the Cypriot embassy was more terse: “As you are aware, Mr. Erdoğan makes a multitude of comments on a daily basis, not all of which necessitate a reaction.”

Ultimately, Çağaptay believes that Erdoğan’s statement was mostly domestic posturing, after a 2018 economic slowdown and a series of Middle East policy failures, aimed at “the right-wing base that adores him and has been listening to his message that he's going to revive Turkey's greatness.”

Citing his 2017 book The New Sultan, Çağaptay continued: “You need issues with which to boost their pride, underline his nativist message, suggest that only he could make Turkey great, and that's why they should keep going for him. Of course nuclear weapons is this ideal way to boost Turkey's ego, because remember, Turks are grandchildren of an empire.”

The Syrian Democratic Forces (SDF) near the border with Turkey similarly believed that Erdoğan’s statement was aimed at a domestic audience.

“I think Erdoğan is running from his internal problems by raising issues that appeal to Turkish nationalism,” said Bassam Ishak, the Syrian Democratic Council’s diplomat in Washington.

Turkey has fought the alliance of Kurdish, Arab, and Assyrian fighters in northeast Syria, and is currently pushing for a U.S.-brokered “safe zone” to limit the SDF’s influence.

The Permanent Mission of the Syrian Arab Republic to the United Nations, which represents Syria’s central government, did not immediately respond to a request for comment.

But Iran, a close ally of the Syrian government and another of Turkey’s neighbors, did not seem thrilled with the possibility of a Turkish bomb.

“Iran’s position on nuclear weapons and other WMD is clear,” wrote Dr. Alireza Miryusefi, head media officer of the Iranian mission to the United Nations, in an email to the National Interest. “As a party to NPT, Iran is against the nuclear weapons as they have no place in our defensive doctrine and are also against our [Supreme Leader’s] religious edict.”

The United States and others have accused Iran of pursuing a nuclear weapon. In 2015, Iran agreed to cut its stockpile of enriched uranium by more than 98 percent and open its research facilities to international inspections, in exchange for protection from economic sanctions. But the Trump administration has since broken the deal in favor of “maximum pressure,” prompting Iran to break some of its own obligations and begin accumulating enriched uranium again.

Çağaptay believes that the failure of the nuclear deal with Iran has pushed Turkey into “intentionally adopting ambiguity regarding nuclear weapons.”

According to Cirincione, nonproliferation experts worry that fear of a nuclear-armed Iran could drive three other states to pursue the bomb: Saudi Arabia, Egypt, and Turkey. Of the three, Cirincione says that Turkey has the most “developed industrial base, educated population, and engineering potential.”

“It’s not the bomb itself that’s difficult. Those designs are seventy-five years old. It’s making the material that goes into the core of the bomb,” he continued. “It would take billions of dollars and years of work to construct the facility to make the fuel for the weapon.”

But Turkey has two possible shortcuts to a bomb. One is buying fuel (or even a completed weapon) from nuclear-armed Pakistan, which has close relations with Turkey.

“If Pakistan wanted to proliferate, and Turkey wanted to acquire weapons, you have an ideal marriage there,” Çağaptay said.

The more worrying route would be to steal one of the U.S. Air Force’s hydrogen bombs stationed at İncirlik Air Base in southeastern Turkey.

“They’re vestiges of the Cold War,” Cirincione explained. “They’re mainly seen as a psychological value, that is their material demonstration of the extended deterrence guarantees that the U.S. gives to our [North Atlantic Treaty Organization] allies.”

“As a NATO Ally, Turkey is covered by NATO’s Article 5 collective defense clause, which bolsters Turkey’s defense and security,” the State Department told the National Interest.

“You could imagine if Turkey attacks a U.S. base, this is an extreme measure. It would not go unanswered. So, there’s a huge deterrent to doing it,” he continued. But there has been a close call in the past. During the July 2016 coup d’etat attempt by members of the Turkish military, mutinous officers took over the Turkish garrison at the base, prompting the Turkish authorities to cut İncirlik’s electricity and seal off the base from the outside.