Hook, Line and Sinker: The State Department's Iran Hand Steps Up the Pressure on Tehran 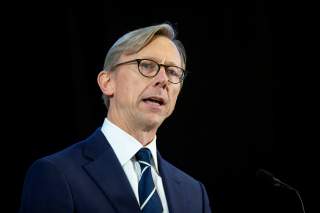 As President Donald Trump inches towards a meeting with Iran’s leaders, his own secretary of state, Mike Pompeo, is sprinting towards de-recognizing the country’s government.

Brian Hook, the State Department’s Special Representative on Iran, announced unprecedented diplomatic moves against the Iranian government today, putting the Iranian military on par with renegade militias in the Middle East. Meanwhile, he attempted to walk back Trump’s earlier statements, discounting the possibility of a high-level meeting in the near future.

“Today, the United States government is intensifying our maximum pressure campaign against the Islamic Republic of Iran,” Hook announced at a press conference. “We are announcing a reward of up to $15 million for any person who helps us disrupt the financial operations of Iran's Revolutionary Guard Corps [IRGC] and Qods [Jerusalem] Force.”

This offer is through the State Department’s counterterrorism rewards program, which has usually been used to solicit information about wanted men such as Osama bin Laden and Abu Bakr al-Baghdadi.

When asked what kind of information the State Department is seeking, Hook told reporters: “You can use your imagination.”

The move may suggest that the State Department no longer considers the Islamic Republic the legitimate government of Iran.

“Today’s announcement is historic. It’s the first time that the United States has offered a reward for information that disrupts a government entity's financial operations,” Hook explained. “We’ve taken this step because the IRGC operates more like a terrorist organization than it does a government.”

Trump designated the IRGC as a foreign terrorist organization in April. Hook claims that “this put them in the same category as many of the terrorist groups that they actively support, such as Hezbollah and Hamas.” Hezbollah is a Lebanese political party with its own militia, and Hamas rules over an unrecognized statelet in the Palestinian city of Gaza.

“Iran wants these groups to extend the borders of the regime's revolution,” Hook said. “We need to deny it the revenue it needs to fund its foreign policy.”

“It seems to be that he’s calling a spade a spade, which is that there are terrorists in the government of Iran,” said Behnam Ben Taleblu, a senior fellow at the Foundation for the Defense of Democracies. “I think the key point there is that usually it’s about terror operations. In this case, it’s about the entire action of a government to abuse the legitimate international financial system and to penetrate everything from the shipping sector to the banking sector of a country.”

“It’s an effort to completely delegitimize anything, and by that, by default, green-light any kind of a step you can envision against them, because there's nothing that would hold us back,” said Trita Parsi, executive vice president of the Quincy Institute.

According to emails leaked by U.S. officials during the press conference, Hook personally attempted to contact the captain of a ship carrying Iranian oil, offering him millions of dollars to steal the ship on behalf of the United States. After he refused, the Treasury Department designated the captain a terrorist supporter.

Iran, the United States, Russia, China, and the European Union had agreed to the Joint Comprehensive Plan of Action (JCPOA) in July 2015. Under the agreement, the international community agreed to protect Iran from economic sanctions in exchange for Iran surrendering its nuclear research program to international inspections. But the Trump administration broke the JCPOA in May 2018, calling it a “bad deal” and opening a new “maximum pressure” campaign against Iran.

Iran retaliated one year later by stockpiling enriched uranium beyond the internationally-accepted limits. Iran’s President Hassan Rouhani has threatened to take “another step” before this weekend.

But after more than a year of pressure, Trump himself has expressed interest in saving the deal. At the Group of Seven (G7) conference in France last month, President Emmanuel Macron said that he was arranging a meeting between Trump and Rouhani.

“A roadmap has sort of been set, but nothing is absolutely set in stone,” Macron said in a joint press conference with Trump on August 26. “We know the terms, we know the objectives, but we have to just now sit around the table and make that happen. So I hope that in the next few weeks, based on our discussions, we will be able to achieve them.”

“If the circumstances were correct or right, I would certainly agree to that,” Trump elaborated. “I have a very good feeling about it. I think we’re going to do something about it.”

Hook, however, tried to soften Macron and Trump’s joint statements: “I think what the president said is when the conditions are right—and we've been laying out very clearly what those conditions are, and we see them in Secretary Pompeo's list of twelve demands.”

In addition to toughening the JCPOA, Pompeo’s demands include the release of all U.S. citizens held in Iranian jails, an end to Iranian support for allied paramilitary groups in the Middle East, a total Iranian withdrawal from Syria, and a conciliatory policy towards Iran’s enemies Israel and Saudi Arabia.

“We will sanction any sanctionable activity,” he quipped in response to a follow-on question about Chinese business in Iran.

France’s President Emmanuel Macron had surprised the G7 by inviting Iran’s foreign minister Javad Zarif as an unannounced guest. While the Iranian official never appeared in the same room as Trump, the move alarmed proponents of the “maximum pressure” campaign enough that Israel’s Prime Minister Benjamin Netanyahu—whose own country is fighting an undeclared war against Iran—frantically called Trump’s aides for reassurances, according to Israeli journalists.

Since then, France has reportedly offered Iran a $15 billion loan in exchange for returning to the JCPOA, echoing language Trump used at the G7. But Hook flat-out denied the statements from French officials.

“There is no concrete proposal. We have no idea if it will become one,” he said. “There is no proposal, so we're not going to comment on something that doesn't exist.”

“Unhinged is a good way of describing it. I think it's reflecting a degree of panic,” Parsi said. “I think Hook and his ally, [National Security Advisor John] Bolton, are terrified that Trump actually will do what Obama did and come to a point of realizing: You know what, the sanctions are adding pressure on Iran, but in and of itself, they're not delivering anything, and you have to shift towards diplomacy.”

Trump, Rouhani, Macron, and Zarif are all slated to attend the United Nations General Assembly in New York at the end of September.

Trump previously sent Sen. Rand Paul (R-Ken.) to talk with Zarif about saving the JCPOA on the sidelines of the United Nations in July, but the Iranian minister told National Interest Editor Jacob Heilbrunn that “members of Congress, senators, and members of the House are not parties for negotiations . . . We can only negotiate with governments.”

Rouhani initially hinted that he was open to direct leader-to-leader negotiations. “If I know that I go [to] a meeting and see someone and in the end the country can get prosperous and the people’s problems solved, I won’t hesitate. This is our main national interest,” he said, according to a  translation by Sina Toossi, a senior research fellow at the National Iranian-American Council.

But facing domestic backlash, Rouhani said that a photo with Trump “is not possible unless the Americans give up on all their oppressive sanctions and respect the rights of the Iranian people,” joking that it would be “not acceptable” for anyone to “photoshop” the two leaders together.

The diplomatic opening at the G7 attracted heated comments from both the Reformists, who make up most of Rouhani’s governing coalition, and the opposition Conservatives.

“The clearest result of your negotiations with America was the JCPOA. No one, and I emphasize no one, can have any doubt about how disastrous that was,” wrote the editor-in-chief of Kayhan, a newspaper aligned with a faction of the Conservative movement opposed to Rouhani.