Lebanon Prepares for War While Israel Is at War with Itself 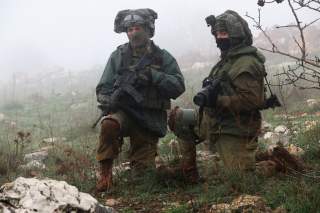 On Sunday, Lebanon was rattled by two air raids. As the dust settles, the small Mediterranean republic is now waiting anxiously to see if simmering Iranian-Israeli tensions will evaporate—or boil over into a full-scale war on Lebanese soil.

With elections in Israel set for September, right-wing Prime Minister Benjamin Netanyahu is trying to cultivate his strongman image with an aggressive military posture. Iran, meanwhile, has to balance its delicate efforts to win new friends in Europe and America with defending its old allies in the Middle East. And neither side is sure where the United States will throw its weight.

Last weekend, the result of this rivalry was Israeli strikes in three different countries: Syria, Iraq, and Lebanon.

On Saturday, Israeli warplanes had killed two Hezbollah members in Syria. Israel claimed that the militants were planning a drone attack “under Iran's command” on the Golan Heights, a disputed territory controlled by Israel.

Then, on Sunday, the Israeli drones exploded over Beirut. A few hours later, Israeli drones attempted to attack a Palestinian communist group in eastern Lebanon, attracting anti-aircraft fire in the Bekaa Valley.

Sunday’s incidents were the first air combat deep within Lebanon since the July 2006 war between Israel and Hezbollah.

Hezbollah’s General Secretary Hassan Nasrallah accused Israel of violating the “rules of engagement” since the 2006 war, calling the drone incident “the first attack since August 14, 2006.” However, Israel did strike Lebanese territory in a 2014 incident along the Syrian-Lebanese border.

“I think what Nasrallah meant is that the old rules of the game that were established in 2006 between Nasrallah and Israel and Hezbollah, have been changed, and this is the first attack under the new rules of the game,” said Slim, founding director of the Initiative for Track II Dialogues at the Middle East Institute. “If that’s the case, how will Hezbollah’s retaliation be different from previous retaliation, and then second, how will Israel’s reaction to Hezbollah attacks be different?”

On the same day, an airstrike killed a Popular Mobilization commander along the Iraq-Syria border. The Popular Mobilization, created to help the collapsing Iraqi Army fend off the Islamic State (ISIS) in 2014, has become an avenue for Iranian weapons and advisors to enter Iraq.

A bloc of political parties allied with the Popular Mobilization accused Israel of the attack. Both the Iraqi parliament bloc and Lebanese president Michel Aoun, whose Catholic-majority Free Patriotic Movement is in a parliamentary coalition with Hezbollah, called the weekend’s incidents an “act of war.”

Last Thursday, Netanyahu told a television station that “I don’t give Iran immunity anywhere,” naming both Iraq and Syria. Over the weekend, unnamed U.S. officials began to tell the media that Israel had been behind a deadly July 12 attack on an Iraqi weapons depot where Iranian military advisors had been staying.

“We defer to the government of Iraq which is conducting investigations,” a U.S. State Department official told the National Interest. As of press time, the Iraqi embassy in Washington has not responded to a request for comment.

“The escalation conducted by Israel in Syria, Iraq, and potentially Lebanon is part of a broader messaging campaign that is being done by the IDF and by Prime Minister Netanyahu to send the message that Israel has the ability to take the conflict against Iran anywhere it so chooses in the Middle East,” said Nicholas Heras, a security fellow at the Center for a New American Security.

Netanyahu is currently facing corruption charges, and parliamentary immunity—which he stands to lose in the upcoming election—may be his last chance to avoid jail.

“Netanyahu is under fire due to cross-border attacks from Gaza and attacks on Israelis in the West Bank,” said Aluf Benn, editor-in-chief of the left-leaning Israeli newspaper Ha’aretz. “Shifting attention to the northern front, where the public trusts his judgment and leadership, could also help his re-election campaign.”

Over the weekend, a bomb killed an Israeli teenager hiking in the Palestinian territories, and Israeli forces traded fire with Palestinian militants in the unrecognized statelet of Gaza. The cross-border fighting in Gaza did not cause any casualties on either side, but sparked mass panic when a volley of Palestinian rockets forced Israeli concertgoers into bomb shelters.

“It seems that Netanyahu who has enjoyed the image of being Mr. Security, and counter-terrorism expert feels it is time to refresh this image which has deteriorated over time,” said Mohammad Darawshe, former director of the United Arab List, a party representing Arab citizens of Israel, and executive director of the Center for Shared Society at the Givat Haviva Institute. “And what better time can you have other than three weeks before elections, so that this can . . . give you more air time?”

But Israeli and U.S. messaging policy may not be coordinated. Ha’aretz speculated that U.S. officials had leaked Israeli involvement in Iraq out of anger at Israel, for damaging America’s delicate relationship with Iraq.

After the clashes, U.S. Secretary of State Mike Pompeo defended “Israel’s right to defend itself,” according to a State Department summary of a Sunday phone call between Pompeo and Netanyahu. At the same time, Iraqi political factions across the political spectrum lined up to defend the Popular Mobilization.

“It does put the U.S. in an awkward position, because Iraq is supposed to be a U.S. ally that it's supposed to protect, instead of protecting the country that is bombing Iraq,” said Trita Parsi, executive vice president of the Quincy Institute.

The annoyance may be mutual. Center-right journalist Barack Ravid reported on Thursday that Israeli officials are worried that Trump is replacing his “maximum pressure” campaign against Iran with highly-publicized “summit diplomacy,” as he has with North Korea.

On the sidelines of the international Group of Seven meeting this week, French president Emmanuel Macron met with Iranian foreign minister Javad Zarif, a surprise guest at the summit. At the conference, Macron and Trump discussed the possibility of renewed diplomacy with Iran.

According to Ravid, Netanyahu and his staff were desperately trying to contact Trump, in order to dissuade the U.S. president from meeting Zarif.

Trump and Zarif will most likely both be at next month’s United Nations General Assembly meeting in New York, which takes place only ten days after Israel’s elections.

“Netanyahu is worried about signs of U.S.-Iranian detente and would like to keep the current American pressure on Tehran, or even see it strengthened,” Benn told the National Interest. “At the same time, Trump’s opening to Iran gives Israel an opportunity to hit Iran’s proxies in the region, believing that Tehran would be reluctant to risk its channels to Washington in order to retaliate to low-level, pinpointed Israeli attacks.”

Ultimately, however, the strikes may have as much to do with the Middle Eastern balance of power as either highbrow summits in New York or lowbrow electioneering in Tel Aviv.

“The election campaign affects how the military strikes are discussed publicly, but it likely does not determine the decision to actually conduct the strikes,” said Henry Rome, an analyst of both Iranian and Israeli politics at the Eurasia Group. “Netanyahu is often portrayed as a reckless, militaristic prime minister, but the opposite is the case: he’s a cautious leader on military matters and is acutely aware of the risks of military operations.”

“Israel has been escalating its attacks against Iran and Iranian-backed groups in Syria consistently for a year and a half now,” Heras told the National Interest. “Israel has identified, correctly, that much of the strength in manpower for Iran’s Hezbollah proxy network comes from Iraqi Shi’a militias.”

The ruling Assad family in Syria, an ally of Iran since the 1970s, nearly lost power in a civil war beginning in 2011. President Bashar al-Assad’s government survived with heavy backing from Iran, Hezbollah, and an alliance of Iranian-backed paramilitaries recruited from Iraq and Afghanistan.

Anxiety over Hezbollah’s growing stockpile of missiles, which killed dozens of Israeli civilians during the 2006 war, has driven Israel to target the Lebanese group inside Syria. Israel has supported the Syrian rebellion with weapons shipments, medical support, and hundreds of airstrikes.

“Israel’s policy has been pretty clear from the get-go, which is to prevent Iranian entrenchment in its backyard,” Slim told the National Interest. “There has been an understanding between Russia and Israel, specifically between [Russian leader Vladimir] Putin and Netanyahu, of giving Israel free rein to target Iranian offensive capacities inside Syria as long as they do not harm Russian interests and Russian personnel in Syria.”