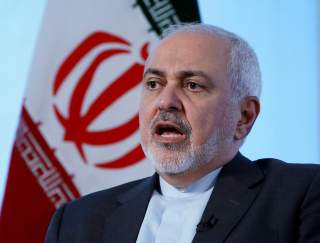 On Thursday, National Interest Editor Jacob Heilbrunn interviewed Iranian Foreign Minister Mohammed Javad Zarif in New York at the Ambassador’s residence on the current state of U.S.-Iran relations. The transcript has been lightly edited for readability.

Jacob Heilbrunn: With the American shooting down of an Iranian drone in the Strait of Hormuz today, are we on a path of escalation?

Mohammed Javad Zarif: I checked with Tehran, and we do not have any information about having lost a drone today. So, we don’t know, as of now what has happened. We have the president saying that they shot a drone. We don’t know whose drone it is, but we don’t have that information. But we are certainly moving in the wrong direction. The fact that the United States has an increased presence in the Persian Gulf doesn’t help security or stability in the area—it’s a tiny body of water and you cannot have such congested traffic there without something happening.

Heilbrunn: A lot of the tension is also focused on the tanker that went missing. Is Iran responsible for that?

Zarif: All the information we have is that we confiscated a small tanker that was only carrying a million liters of smuggled oil products—not oil—and that happens quite often in the Persian Gulf because of heavily subsidized prices in Iran of oil products. There is a lot of smuggling from both sea and land borders and we interdict them on a regular basis. So if that is the tanker they’re talking about, that is a smuggling tanker, not a shipping tanker.

Heilbrunn: Another move that the Trump administration has announced is sending about five hundred more soldiers to Saudi Arabia. What is your response to that?

Zarif: It’s a symbolic move that doesn’t help security for anybody. Certainly, security in our region cannot be purchased from outside. We believe that countries in the region should provide their own security through cooperation and through regional integration, and not through trying to purchase it from outside. It’s not usually a tenable avenue to getting security.

Heilbrunn: Another move that the Trump administration could make would be to try and supply more weapons again in Syria—for example by downgrading Al Nusra’s status as a terrorist organization. How would you react to those kinds of moves?

Zarif: Well, they have already provided weapons—let alone Al Nusra, they have provided weapons to Daesh [the Islamic State]. Reports in Western media indicate that American weapons through Saudi Arabia went to Daesh while they were in Syria. You cannot arm terrorist organizations and expect them to win over people’s resistance—this is just impossible.

Heilbrunn: How do you assess the talk of Rand Paul serving as a mediator or negotiator on behalf of Trump as opposed to the National Security Advisor John Bolton and Secretary of State Mike Pompeo taking the lead?

Zarif: President Trump said today that he is not an emissary. So we have to take him at his word.

Heilbrunn: Do you have any comment on any negotiations that might be taking place or any feelers?

Heilbrunn: We already did come close to war in June when Trump called off strikes at the last minute. Do you think that would have inevitably turned into an all-out response by Iran?

Zarif: It would’ve. It would’ve and the United States was informed of that.

Heilbrunn: When exactly was it informed?

Zarif: Immediately after the shooting of the drone.

Heilbrunn: I see. Is that what you would call a red line? A direct American attack on Iran, or is there something less that would trigger a reaction?

Zarif: We defend ourselves. Any attack on us will be reciprocated massively.

Heilbrunn: To sketch it even more broadly, are you more concerned than you have ever been or do you think that Trump’s moves—his unpredictability—do hold the chance for some kind of breakthrough?

Heilbrunn: Have you been more concerned ever since John Bolton was named national security advisor? Has that been part of your calculus or have you focused more on the president’s unpredictability?

Zarif: I think the presence of Ambassador Bolton in the White House was not good news for anybody in the world.

Heilbrunn: Do you believe that Trump would like to pull another North Korea in Iran where he would have a direct meeting in Tehran?

Zarif: I think he said that, but I do not think the approach of maximum pressure will get him that prize.

Heilbrunn: Why not go for broke with Trump and deal with him directly—which is what he is seeking—and bypass the national security apparatus?

Heilbrunn: Do you think there is any conceivable way that the Joint Comprehensive Plan of Action [JCPOA] can be revived or is there so much mistrust in Iran itself that the calculus has changed?

Zarif: Well, certainly there is a lot of mistrust in engagement in Iran, but Iran has shown to be committed to its international obligations. So if we see a reciprocal commitment on the other side, then JCPOA is a document that is worthy of resuscitating and we will do our best to keep it afloat.

Heilbrunn: Has your previous backing for the agreement damaged your position in Iran?

Zarif: Certainly the people are not happy with the outcome because they see that the United States is even less trustworthy than they thought.

Heilbrunn: What is your analysis of relations with Europe? Is Europe going to follow an independent path or is it going to follow the one that the Trump administration is pressuring it to?

Zarif: If Europe wants to pursue its own interests, it has to follow a different path. I don’t think they have gathered the necessary political will in order to pay the price for that independence. It’s not going to be free of charge.

Heilbrunn: Do you see Germany as the key player there?

Zarif: I believe all three plus the European Union are important players—each one has their own difficulties. The UK is going through Brexit, France has some domestic difficulties, Germany is going through a succession process. So there are difficulties in each of these countries, but I think they are our interlocutors and we will continue to deal with all three of them.

Heilbrunn: If we were to lurch into war, how would you envision that?

Heilbrunn: Could it become a World War I scenario where it’s the initial spark that triggers a wider conflagration?

Zarif: I think whoever starts that war will not end it—and we will not be the one starting it.

Heilbrunn: What would be your assessment of Russia’s moves towards Iran if a war did break out?

Zarif: Well, it’s unpredictable, but we consider Russia to be an important partner and an important neighbor. We don’t have a military alliance with Russia, but we have good relations.

Heilbrunn: And currently, what are you hearing from Moscow?

Zarif: We do not build our foreign policy based on assumptions of anybody else’s help. We have learned to rely on our own resources.