Inside the Iran Hawks' Hijacking of Trump's Syria Withdrawal Plan 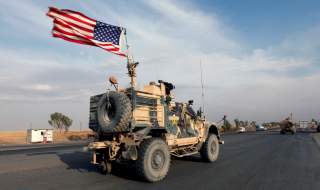 President Donald Trump says he wants to “end endless wars.” But the counter-Iran, counter-Russia hawks on his national security team are planning to sneak in a long-term U.S. military presence in southeast Syria. And their plans may have been in the works for a while.

With U.S. forces opening the gates for Turkey to take over northeast Syria, Trump administration officials are now drawing up plans to keep several hundred U.S. troops alongside Arab rebel groups in the country’s oil-rich southeast. Trump has said, “we have secured the oil.” And Syrian Democratic Forces (SDF) diplomats have said they’re willing to work with such a plan.

The National Interest has learned that the Trump administration’s anti-ISIS team, led by Ambassador James Jeffrey, has floated the idea of a counter-Iran presence in Deir ez-Zor for some time now.

“Every day, the [U.S.-led] coalition has been very strong against [Syrian ruler] Assad,” said Omar Abu Layla, CEO of Deirezzor24, who said that he has seen U.S. helicopters and F-35 fighter jets increase their presence against Iranian-backed forces in the region.

Abu Layla told the National Interest that he spoke to Jeffrey’s team three or four months ago. “They promised, ‘we will not leave Syria before we kick Iran out of Syria,’” he claimed. “They will not leave our province easily.”

"Since December, President Trump has been clear that American forces would be withdrawing from Syria. At the President’s directive, the State Department, including Ambassador Jeffrey, has been working with the Department of Defense on a deliberate and coordinated withdrawal of American forces overtime, while also working with our partners on the ground to maintain consistent pressure to ensure ISIS’s enduring defeat," a State Department spokesperson told the National Interest. "We do not discuss details of our diplomatic engagements but our message on this has been consistent with all of our partners in Syria."

“I can assure you that the effort to push back against Iran are real and continuous, unlike what the last administration did that picked Iran as its strategic security partner in the Middle East,” said Secretary of State Mike Pompeo on October 20.

But it’s unclear how feasible a long-term U.S. presence will be without the Kurdish core of the SDF.

“It’s going to be a Fort Apache scenario,” former Special Presidential Envoy Brett McGurk, who ran the anti-ISIS team at the end of the Obama administration and beginning of the Trump administration, told the National Interest. “Very difficult to resupply.”

McGurk was describing the difficulty of supplying a military outpost in the middle of nowhere.

“Trying to do more, we’re going to dig a hole deeper” for the Syrian Kurds, McGurk had said at an event earlier today at the Foundation for Defense of Democracies.

Jeffrey has made no secret of his desire to use the U.S. presence in Syria for a counter-Iran mission, even if he is uneasy with his Syrian Kurdish partners. He told the Atlantic Council on December 17 that the United States “does not have permanent relationships with substate entities,” referring to the Syrian Kurdish forces, but emphasized that U.S. forces will not leave Syria until all Iranian forces are gone. A few months later, Jeffrey took over McGurk’s office.

Barabandi says that he has talked to Jeffrey “many times” after defecting to America in 2013.

The end result of Jeffrey’s goals may be a plan to cultivate the Arab branch of the SDF as an independent counter-ISIS, counter-Assad force.

“It had been under consideration,” said Brian Katz, a former CIA military analyst who served as the Secretary of Defense’s country director for Syria in 2016 and 2017. “Some of these efforts were underway.”

Katz also said there were efforts to tone down the ideological bent of the SDF, which reveres the imprisoned left-wing Kurdish leader Abdullah Öcalan. Such a move could reduce the influence of the SDF’s core Kurdish leadership over other factions.

Trump announced after an October 6 phone call with Turkish president Recep Tayyip Erdoğan that “Turkey will soon be moving forward with its long-planned operation into Northern Syria.” The announcement kicked off a Turkish attack on the SDF, which Turkey sees as a branch of the Kurdish separatist movement within Turkey.

The Trump administration brokered a shaky cease-fire solution between the SDF and Turkey, giving U.S. troops time to retreat even as the Turkish offensive resumed in full force. Without U.S. support, the SDF cut deals with the Russian- and Iranian-backed government of Syrian ruler Bashar al-Assad.

But the White House’s October 14 statement noted that U.S. forces will remain at al-Tanf, a key outpost in southeastern Syria outside the SDF-controlled zone.

Trump has repeatedly claimed that “we have secured the oil.”. He is likely referring to al-Omar, the largest oil field in Syria, and a key SDF fortress bordering Assad-controlled territories in Deir ez-Zor.

“Deir ez-Zor specifically is a pure Arab area, and they suffered a lot from ISIS. They lost thousands of people. They suffered from Iranian militias, from Assad,” said Barabandi, who has family ties to Deir ez-Zor. “We hope that the Americans can benefit from the dynamics on the ground, because these people are anti-ISIS, they are anti-Iran, they are local, and they are hoping to find some formula to work with the United States even after the United States leaves Syria.”

But Katz emphasized to the National Interest that Arab elements of the SDF “lack the capability of the YPG,” the Kurdish core of the SDF. In order to leave an Arab stay-behind force in Deir ez-Zor, the United States would need to “train the trainer,” using the YPG to build the capacity of Arab fighters.

Now that the YPG is busy fighting Turkey—and working on a deal with Assad that would likely exclude a U.S. presence—U.S. forces would have to be directly involved in supporting the fighters in Deir ez-Zor.

“That’s going to be a difficult and intense train and assist mission,” Katz said.

U.S. forces in the area would need a “land bridge” of their own. While the garrison in al-Tanf is connected to Jordan, a U.S. partner, the Faysh Khabur border crossing with Iraq and the Rmeilan military airfield are the only U.S.-friendly links between Deir ez-Zor and the outside world.

Both are within the twenty-mile strip of land that Erdoğan has claimed for his “safe zone.” Keeping a U.S. presence there requires Turkish cooperation.

The counter-Iran, pro-Turkey hawks who now have Trump’s ear seem to believe such cooperation is possible.

“I am one of those who would have liked to have seen us leverage the position in northern Syria to become a position of power that we would use to prevent the Iranians from creating a corridor from Baghdad to Beirut,” Hudson Institute fellow Michael Doran said on October 17. “I think when Americans are looking at this crisis, they should say to themselves, when the dust all settles, we want the Turks working within our framework.”

“I hope we have divorced [Öcalan’s party] the PKK,” he continued, speaking at SETA, a think tank in Washington close to Turkey’s ruling party.

Trump retweeted a statement by Doran denouncing the PKK, and has since then repeated Doran’s talking points, calling the party “more of a terrorist threat in many ways than ISIS.”

“Deir ez-Zor is not an area that means much to Turkey,” claimed Barabandi. “I would not be surprised if Turkey said to the Americans, we will work with you in that part.”

But even with Turkey’s cooperation, the U.S. presence in southeastern Syria may not be sustainable in the long run.

“It’s not really possible for us to exploit those oil resources unless we want to be oil smugglers,” McGurk said. He said that former Secretary of State Rex Tillerson, a long-time oil industry executive, had looked into helping the SDF sell Syrian oil, but could not find a legal path for American involvement without Assad’s permission.

“The Assad government is going to want to control oil resources, so U.S. bases that are in close proximity to oil resources will become a real geopolitical boiling point,” said Center for a New American Security fellow Nicholas Heras.

“Over the long term, the pro-regime forces see that the U.S. wants out, and they’ll be willing to take more risks,” Katz added. “We’re going to be in competition for the same kind of proxies.”