How the Trump Administration is Using ‘Force Protection’ to Fight Iran 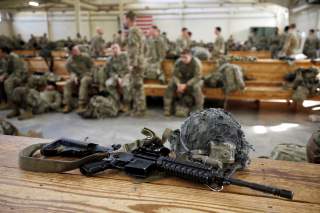 U.S. commanders have found a new legal umbrella to strike at Iran and its allies: protecting U.S.-led counter-ISIS forces.

President Donald Trump has not asked Congress for an authorization to use military force against Iran, even while his administration escalates against the Iranian-led coalition across the Middle East. The U.S. military is forced to lean on “force protection” as a legal justification for hitting back at Iranian or Iranian-backed forces, as the Trump administration sidesteps a thorny domestic debate around war powers.

“We have taken appropriate force protection actions to ensure the safety of American citizens, military personnel and diplomats in country, and to ensure our right of self-defense,” announced Defense Secretary Mark Esper, after an Iranian-backed militia called Kata’ib Hezbollah allegedly fired on a U.S. base in Iraq and attempted to storm the U.S. Embassy in Baghdad.

Esper warned on January 2 that he could “take preemptive action as well to protect American forces.”

Both the Obama and Trump administrations justified Operation Inherent Resolve under the President’s power to wage a defensive war, the 2001 authorization to use military force against al-Qaeda, and the 2002 authorization to “defend the national security of the United States against the continuing threat posed by Iraq.”

State Department officials had previously tried to claim that a war with Iran is covered by the authorization to use military force against al-Qaeda, prompting a strong backlash from skeptical members of Congress.

But the U.S.-led counter-ISIS forces have been increasingly pushed into a counter-Iran role, as the Iranian government looks to retaliate for the Trump administration’s escalating “maximum pressure” campaign against Iran.

"Combined Joint Task Force Operation Inherent Resolve is here to help Iraq in its fight against Daesh [the Arabic acronym for ISIS],” said Maj. Gen. GM Strickland, the British deputy commander of the U.S.-led coalition. “Rocket bombardment of coalition and Iraqi forces, and mob violence at US Embassy, orchestrated by Kataib Hezbollah, prevent us from assisting."

Missiles smashed in a military base near Kirkuk on December 27, wounding several U.S. troops and killed an American working at the base. U.S. officials soon pointed the finger at Kata’ib Hezbollah—and killed 25 militia fighters in retaliation.

The raid enraged Kata’ib Hezbollah supporters, who stormed the U.S. Embassy in Baghdad.

Attack helicopters from the 34th Combat Aviation Brigade, deployed as part of Operation Inherent Resolve, fired flares over the crowd. A special task force of U.S. Marines rushed in from Kuwait to protect the embassy. And Esper talked about the need for “force protection.”

Kata’ib Hezbollah eventually ordered its supporters to disperse. No one was killed in the clashes around the embassy.

It was the closest U.S. and Iranian forces came to war since July 2019, when an Iranian air defense unit shot down a U.S. surveillance drone over the Persian Gulf.

The U.S. military is now deploying hundreds of paratroopers from the 82nd Airborne Division to the Middle East as “an appropriate and precautionary action taken in response to increased threat levels against U.S. personnel and facilities,” according to Esper.

“There is tremendous pressure now being placed on Central Command—CENTCOM—to find ways to shoehorn in great power competition within policy and force disposition in the Middle East,” said Nicholas Heras, author of Iraq’s Fifth Column: Iran’s Proxy Network. “This mandate that is being placed on CENTCOM comes from the National Defense Strategy and the Trump administration.”

The National Defense Strategy for 2018–2023, written by the Department of Defense, predicts the “reemergence of long-term strategic competition” between states after a period of “strategic atrophy.”

But the Trump administration has not asked Congress for new legal authorities to confront Iran or other states. For now, U.S. commanders are only authorized to defend the forces that are already fighting the older wars in the Middle East.

The Department of Defense and CENTCOM did not respond to a request for comment as of press time.