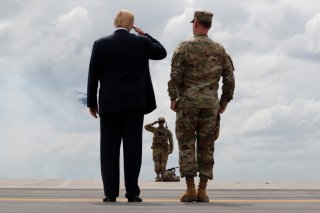 Officials from the Trump administration asked Congress for nearly unlimited power in a recent debate over renewing the Authorization for the Use of Military Force (AUMF) against Al Qaeda. In a July 24 meeting of the Senate Foreign Relations Committee, State Department Acting Legal Advisor Marik String took a hard line on the president’s warmaking authority, attracting the ire of Democrats and setting off several heated exchanges with Sen. Ed Markey (D-MA).

Recent tensions with Iran and a prospective Turkish invasion of northeast Syria, where several thousand U.S. troops are stationed as part of the war against ISIS, have raised questions about the Trump administration’s powers under the current AUMF. The administration privately told Turkey in early August that it cannot defend northeast Syria without further congressional authorization, but continues to publicly claim a blank check to use lethal force almost anywhere in the world—and is asking Congress to remove whatever limits still exist.

In his prewritten testimony, String told the Senate committee that “any new AUMF must have no sunset provision, no geographic limitation, and no repeal before replacement.” He said in follow-up questions that the president already has the authority to order military strikes around the world regardless of Congress’ approval, but that it does not count as war “in a constitutional sense.”

“It’s important to emphasize that the administration wants no geographic or temporal limitations on the authorities it is claiming, which has significant human-rights and civil liberties consequences for citizens and noncitizens alike,” Hina Shamsi, director of the National Security Project at the American Civil Liberties Union, told the National Interest. “Because these are the powers the government claims allow it to kill, detain, and even conduct surveillance in multiple countries without meaningful judicial review.”

Article I of the U.S. Constitution states that “Congress shall have Power…to declare War,” but Article II names the president as “Commander in Chief of the Army and Navy of the United States.” String made it clear that the Trump administration sees this authority as a blank check to respond to crises around the world.

“Without getting into any factual situation, the Commander-in-Chief power under Article II is flexible depending on what particular facts were presented by an attack,” he said. “I can't provide a legal conclusion based on what authorities may be used, but we're confident that the president has the right authorities to keep the nation safe.”

“If you have sufficient authority under Article II, why do you want to hold onto [the 2001] AUMF?” Markley asked.

“Because we rely on this AUMF for operations in seven different theaters,” String responded.

John Glaser, director of foreign-policy studies at the Cato Institute, told the National Interest that the State Department’s position amounts to “the current set of AUMFs authorizes our current set of active hostilities, but we actually don’t need them. And we’ll continue to fight these wars even if you guys repeal the AUMFs.”

“Despite the fact that discussion on the AUMF is valuable and important, the real issue is getting away from the notion that the president really doesn't need Congress to go to war,” he said.

“Our president needs to be able to respond quickly as threats materialize. Whatever we do, we should not politicize the AUMF issue, and we should not support an AUMF with irresponsible restrictions on our commander-in-chief or on the commanders on the field,” Risch said in his opening speech. “Any efforts to repeal that AUMF must also include efforts to pass a suitable replacement.”

The House of Representatives voted last week to end the post–9/11 AUMF in a bipartisan amendment to the military budget. While the budget as a whole is expected to pass without opposition, the House’s version must be reconciled with that of the Senate, giving Risch’s committee a chance to preserve the AUMF.

“The Constitution of the United States gives to Congress the sole authority to declare war, and therefore to authorize the use of military force,” said Sen. Bob Menendez (D-NJ). “Let's be clear. Congress has, over the past decade, not adequately exercised our prerogative, allowing presidents to abuse their power for decades.”

Menendez’s office did not respond when asked which wars he considers illegitimate.

Sen. Chris Murphy (D-CT), an outspoken critic of America’s involvement in the Middle East, brought up the question of war with Iran. He said that the president could only initiate military action against another country with a formal authorization from Congress, or under his “Article II authority” to defend U.S. forces from an ongoing or imminent attack.

String told Murphy that the president’s authority to attack Iran is “a little more flexible than you've described,” to the exasperation of some senators.

“There needs to be a precise national interest, as you've articulated, by the president that would justify the use of force under the Constitution,” String continued. “Some of those types of national interests that have been identified in the past are protections of U.S. persons or property, support of allies, support of UN Security Council resolutions, promoting regional stability, deterrence of the use of [weapons of mass destruction].”

“Isn’t that a rather large loophole?” Markley asked, bringing up precedents set by George Washington and Thomas Jefferson. “Now you're telling me that Article II . . . allows going to war for some analysis of regional stability, without a direct attack on the United States?”

Glaser agreed that String’s claims are “a really broad interpretation of what the president has the power to do. He has the power to repel sudden attacks or impending invasions, but we're meddling over there thousands of miles away in the Middle East.”

Markley asked what authority President Donald Trump had to strike on Iran on June 20. Trump ordered an attack on Iran after the Iranian military shot down a U.S. surveillance drone near the Iranian coast that day, but changed his mind before following through.

“He did not order the strike. The strike never occurred,” String insisted.

“He ordered the strike before he withdrew the order,” Markley fired back.

“Unfortunately, I cannot get into the specific details of particular deliberations that occurred,” String responded.

“Well, that's why you're here to testify! You’re here to tell us what was the authority, because we want to know,” Markley said. “Here's my conclusion for you. The administration has no authority to strike Iran.”

“I was in the room when that decision was made,” Risch interrupted. “Without going into anything classified or anything else, I can tell you, after there was an attack on U.S. assets, there was an in-depth discussion on what defensive measures would have been necessary for our assets in the region, which in my judgement would have been under Article II.”

Sen. Tim Kaine (D-VA) moved to address Secretary of State Mike Pompeo’s claims that Iran has backed Al Qaeda. “I am correct—am I not?—that neither the 2001 nor 2002 authorizations even mention the word Iran,” he said, citing the 9/11 Commission Report’s conclusion that Iran had nothing to do with the attacks of September 11, 2001.

David Hale, the State Department’s Undersecretary for Political Affairs, reiterated that the Trump administration does not currently interpret either AUMF to include Iran. He seemed to leave the door open for including Iran in the future, telling the Senate committee that “there has been the provision of safe haven by Iran to elements of Al Qaeda” but that he would have to share his evidence “in a classified setting.”

When asked if Iran has ever harbored Al Qaeda officials directly responsible for 9/11, String responded, “not that I am aware of at the time, but I want to get a complete answer.”

“Unlimited in space, unlimited in time, and according to the set of interpretations you’ve shared today, unlimited in power,” Merkley complained, referring to String’s proposal for a new AUMF. “How is that not a complete abrogation of the constitutional vision of the warmaking authority of Congress?”

“People should remember why it is that in our system, Congress is given the authority to determine our involvement in overseas hostilities, and not the executive branch. That was done deliberately by the people who framed and authored the Constitution,” Glaser told the National Interest. “In their understanding of history, a boundless, war-prone executive that is not checked by another authority on questions of war will lead to tyranny.”