Blurred Lines: Does Pompeo Have the Authority to Fight Iran for Iraq? 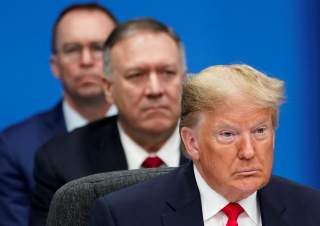 The Trump administration is pointing the finger at Iranian-backed militias—and laying down a new red line—after a volley of rockets slammed into Baghdad International Airport, injuring five Iraqi soldiers.

Secretary of State Mike Pompeo warned on Friday that the United States must “remind Iran’s leaders that any attacks by them, or their proxies of any identity” that harm Americans, America’s allies, or America’s interests “will be answered with a decisive U.S. response.”

“Iran must respect the sovereignty of its neighbors and immediately cease its provision of lethal aid and support to third parties in Iraq and throughout the region,” he said.

Pompeo’s warning seemed to imply that the United States could fight Iran to defend the sovereignty and stability of Iraq. The State Department did not immediately respond to a request for clarification on this issue. But the statement raised eyebrows over the Trump administration’s war powers—and reopened questions that Congress has been fighting over for months.

“The bipartisan majority in Congress has made clear that Trump can’t go to war with Iran without our vote. That’s why I’ve supported prohibiting the use of funds for a first strike without congressional authorization,” Sen. Chris Murphy (D-CT) told the National Interest. “The administration’s ‘maximum pressure’ campaign with Iran has been a total disaster. Iran is further away from the negotiating table, and we are closer to war than ever.”

Unknown attackers have launched rockets near several U.S. military bases in Iraq over the past few weeks, amidst U.S.-Iranian tensions and an ongoing popular uprising against the Iraqi government. U.S. officials, including Pompeo, point the finger at Iran.

The U.S. military can respond to a direct attack, as Operation Inherent Resolve Spokesman Army Col. Myles Caggins emphasized to the National Interest: “we have the right to self-defense.”

But it’s less clear whether the Trump administration can legally order U.S. forces to retaliate for an attack like last week’s incident, which only injured Iraqi personnel.

Congress has tried to remove any leeway for the Trump administration to wage war against Iran. Representatives Ro Khanna (D-CA) and Matt Gaetz (R-CA) successfully passed an amendment to the 2020 military budget in July, explicitly forbidding the president from going to war with Iran.

But the Senate refused to take up the amendment on December 9, punting the question back to President Donald Trump.

“As far as the Trump administration is concerned, they have the authority,” said Christopher Preble, vice president for defense and foreign policy studies at the Cato Institute. “All Congress can do is complain about it.”

The 2002 AUMF allows the President to “defend the national security of the United States against the continuing threat posed by Iraq.”

The law was meant to authorize a war against Iraqi dictator Saddam Hussein, but the Trump administration used it in February 2018 to justify detaining ISIS members without a trial.

Scott Anderson, senior editor at Lawfare and a fellow at The Brookings Institution, paraphrased how the Trump administration could use the 2002 AUMF to fight Iran: “We have this authorization to address threats by Iraq. We've interpreted it to mean all threats to the Iraqi government in the past, and this is another iteration of that.”

Preble told the National Interest that this amounts to a “license for perpetual involvement in Iraqi politics.”

And the Iraqi government may not even want U.S. protection, raising a host of problems in international law.

“It’s pretty clear that the Iraqi government has asked the United States for help in fighting ISIS, but they have at various times very strongly indicated that they do not want the United States doing things related to Iran on their territory,” Anderson told the National Interest.

“I suspect [using the 2002 AUMF] would be controversial, but I think it's probably a little more credible than the 2001 AUMF,” Anderson told the National Interest. “In this sort of situation you’re describing, which has nothing, frankly, to do with Al Qaeda, but has a lot to do with Iraq, you could see that falling more easily under the 2002 AUMF, but again, it’s going to raise a lot of eyebrows.”

The 2001 AUMF, passed after the September 11 terrorist attacks, authorized the president to attack any entity that “harbored” Al Qaeda. When tensions with Iran rose over the summer, Pompeo floated the possibility that there was a “connection” between Iran and Al Qaeda, which is an idea that experts and members of Congress disagreed with.

Anderson explained that Trump could also use his Article II powers as commander-in-chief to launch a “limited” response short of war.

The Trump administration has given Congress a laundry list of reasons the president can use military force under Article II: “protection of U.S. persons or property, support of allies, support of UN Security Council resolutions, promoting regional stability, deterrence of the use of [weapons of mass destruction].”

“I don’t believe that the security commitment the U.S. government has made to the Iraqi government is nearly as clear-cut, for example, as the U.S. security [commitment] to NATO allies,” Preble said, referring to the Cold War-era North Atlantic Treaty. “Even treaties that have been ratified by the Senate do not erase Congress’s authority over the declaration of war.”

“But if President Trump goes to his lawyers and says, ‘is his legally available,’ I think it’s likely that they're going to say yes,” Anderson speculated.

“That doesn’t mean that the Trump administration isn’t aware that it's going to raise all sorts of alarm bells on Capitol Hill,” he continued. “The questions about legality bleed into that political narrative in different ways.”

“This is not driven solely by partisanship, and the hatred of Democrats towards President Trump, but by constitutional principles,” Preble concluded. “I would like to believe that the same impulses that rose up in the spring and summer [with the Khanna-Gaetz amendment] would rise up again if the Trump administration tried to carry through what they’ve been threatening to do, which is to start a war with Iran.”