Exclusive: Inside the State Department's Meltdown with the Kurds 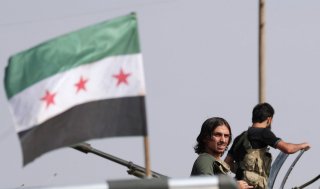 A State Department official broke a pencil and screamed at the Syrian Kurdish delegation during a dramatic breakdown of relations between the United States and the Syrian Kurds. The high-tension moment in September highlights the diplomatic problems plaguing the Trump administration, which has been trying to broker a cease-fire agreement between Turkey and the Kurdish-led Syrian Democratic Forces.

Although the administration is publicly preaching peace, patience, and cease-fire tactics, its relationship with the Syrian Democratic Council (SDC), the political wing of the Kurdish-led Syrian Democratic Forces, has been crumbling behind closed doors.

The National Interest has learned from multiple sources about tense meetings between SDC diplomats and State Department officials who oversee the Trump administration’s policy on Syria. The State Department repeatedly pushed for the SDC to work with Turkish-backed Islamist rebels while berating Syrian Kurdish officials and refusing to listen to their concerns, according to multiple sources.

One source with firsthand knowledge of the screaming session told the National Interest that Deputy Assistant Secretary of State Joel Rayburn, who is a special envoy for Syria, yelled at SDC officials and broke a pencil in a translator’s face. Two sources with secondhand knowledge confirmed this version of events.

“[Rayburn] loves the Syrian Islamist groups,” one of the three sources said. “He thinks they can counter Iran. He is dreaming.”

“He is pushing [the SDC] to meet with jihadists,” the source added.

A State Department spokesperson initially asked the National Interest to refrain from publishing this story until Wednesday. This would allow the department time to gather “information from a few different sources” that might yield “meaningful, useful answers,” the spokesperson explained in an email. An hour and a half later, after exercising all options to delay the story, the spokesperson issued a statement describing its “efforts to foster a durable, lasting end to the Syrian civil war.”

“[W]e have regularly urged the SDC to enter into dialogue with a wide cross-section of stakeholders, including the Syrian Negotiations Commissions and White Helmets,” the spokesperson said.

The Syrian Negotiations Commission represents rebel groups outside the SDC’s control. The White Helmets are a civil defense organization that operates in areas held by those rebels. Earlier today, President Donald Trump approved $4.5 million in aid to the White Helmets.

In addition to the uptick in tense verbal exchanges, the three different sources described to the National Interest how State Department officials attempted to condemn the brutal murder of Kurdish-Syrian politician Hevrin Khalaf only to have their efforts waylayed by Ambassador James Jeffrey, who oversees anti-ISIS efforts. Jeffrey blocked the statement, they said.

During the Turkish incursion into Syria last week, Turkish-backed elements of the Free Syrian Army kidnapped, murdered, and mutilated Khalaf, who led a joint Kurdish-Arab-Assyrian party called the Syrian Future Party that is unaffiliated with the SDC. Khalaf had met several times with Deputy Special Envoy William Roebuck, a member of Jeffrey’s team.

“On the killing of Havrin Khalaf, the Department responded to reporters’ inquiries on the day of her death, October 12, noting that we found it deeply troubling and condemned any mistreatment and extrajudicial execution of civilians or prisoners,” the spokesperson said.

Two sources also added that the Rayburn told the SDC earlier this month that U.S. forces would not leave Syria even if the SDC or the Syrian Kurdish armed forces asked them to.

Now, even as U.S. troops are stepping aside to allow Turkey to attack U.S.-backed Syrian Kurdish forces, Jeffrey’s team is floating plans to peel off Arab components of the Syrian Democratic Forces to build a counter-Iran force far from the Turkish border.

The Trump administration has confirmed that U.S. troops will remain at al-Tanf, a special operations base in southern Syria.

The SDC may have found a more receptive audience with Congress. SDC Executive President Ilham Ahmed met yesterday with Sens. Lindsey Graham (R–S.C.) and Chris Van Hollen (D–MD), who are spearheading an effort to put economic sanctions on Turkey.

Van Hollen told her that he is looking to keep an “adequate” number of U.S. troops in northeastern Syria to deter Turkey.

The Turkish government considers the Kurdish component of the Syrian Democratic Forces an extension of the Kurdish separatist movement inside Turkey. The U.S. military had backed the mixed Kurdish-Arab-Assyrian force against ISIS, but the continued relationship was a source of strain between the Turkish and U.S. governments.

After months of heated negotiations between the United States and Turkey, the U.S. military announced a “security mechanism” in Syria, clearing fortifications and heavy weapons pointed at the Turkish side and allowing joint U.S.-Turkish patrols on the Syrian side of the border.

Trump ended the security mechanism after an October 6 phone call with Turkish president Recep Tayyip Erdoğan. SDC officials were not informed of his decision. Two days later, Turkish forces streamed across the border. Facing domestic backlash, the Trump administration denied that they ever gave Turkey a “green light.”

A temporary cease-fire announced by the Trump administration last week will expire today. If Turkey permanently halts its offensive into Syria, then the United States will lift sanctions on the Turkish economy.

But Turkey’s next move will be determined by meetings in southern Russia, not Washington. Turkish president Recep Tayyip Erdoğan met with Russian president Vladimir Putin in Sochi today in a “heated” discussion that was supposed to last an hour but stretched to six hours.

The Russian-Turkish deal is nearly identical to the “security mechanism” that Jeffrey had negotiated in August—except with Russian troops in place of U.S. forces.