State Department Snafu: Turkey Was Never Given a Green Light to Invade Syria 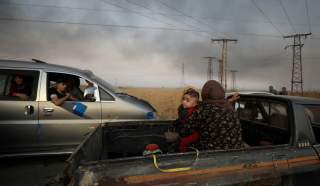 The Trump administration is working behind-the-scenes to mediate a ceasefire between Turkey and the Syrian Kurds, but it’s unclear whether its efforts will have any effect. But for now, the United States believes that the Turkish campaign in Syria is limited.

A senior State Department official talked to reporters about the state of the U.S.-Turkey relationship during an afternoon conference call on Thursday. The call was a rare glimpse into the thought processes of the department, which has been unusually silent on Syria.

As a condition of participating in the call, the National Interest agreed not to mention the official by name.

The senior official explained that President Donald Trump has made “four decisions” guiding current U.S. policy towards the Syrian Democratic Forces (SDF), a Kurdish-Arab-Assyrian alliance in northeastern Syria that was backed by the United States until a Sunday night announcement by Trump.

After a phone call with Turkish president Recep Tayyip Erdoğan, Trump ordered U.S. troops to leave the border between Syria and Turkey, where they had been participating in a “security mechanism” alongside Turkish troops. On Tuesday, Turkey announced “Operation Peace Spring,” an invasion of the SDF-held zone.

“The U.S. will not endorse this invasion or give it any kind of political cover,” the State Department official said, repeatedly emphasizing that the United States sees Turkey’s move as a “bad idea.”

The official also said that Trump decided to neither support the Turkish operation nor oppose it with military force. Finally, the official added, the U.S. government will impose “significant costs” if Turkey does anything deemed disproportionate or inhumane.

“It would include ethnic cleansing…indiscriminate air, artillery, and other fire directed at civilian populations,” the official said. “We are not seeing significant examples of that so far.”

At a press briefing earlier in the day, an SDF diplomat had accused Turkey of just that. “All this region is inhabited. All these are cities,” said Sinam Mohamad, co-chair of the U.S. Mission of the Syrian Democratic Council. “Now, [Erdoğan] is telling [Trump], ‘I am not targeting the civilians.’ It’s not true. First day, we had five civilians die, yesterday.”

“In a district of Qamishli City . . . a child of six years old died. So they are not shelling the civilians,” she added.

“Our position is that this was a mistake for Turkey to do, that we will do our best to get this thing stopped,” the official said. “We have been tasked by the president to see if there are commonalities between the two sides.”

The official also denied that the United States had given Turkey a “green light” to invade. “I’m right up with the Saudis and Bibi Netanyahu. This was a very big mistake,” the official said, clarifying that the mistake was on Turkey’s end.

“The Turks have given us general guidelines as to where they want to operate and what their military goals are,” the official said. The State Department has “no sense they want to go further.”

However, the official added that “the Turks say that this is a short-term operation. They also said this about their Jarabulus and al-Bab operations west of the Eurphates.” In the winter of 2016 and 2017, Turkey launched military operations to clear ISIS fighters from the two border towns and install Syrian rebel grounds in their place. Turkish forces remain in the border pocket, and Turkish civilian institutions have expanded their military presence.

The official did not mention Afrin, where Turkish forces and Turkish-backed rebels removed the SDF and began resettling refugees from other parts of Syria in early 2018. The Turkish-backed government there is now facing a smoldering insurgency.

The SDF has raised worries that ISIS could return amidst the chaos. Both the State Department official and Sinam Mohamad confirmed that all prisons holding ISIS fighters are being guarded, although Mohamad said that the offensive has forced the SDF to reduce its guard forces to dangerous levels. The State Department official also noted that there have not been in-depth discussions with Turkey on what to do if they capture any SDF prisons.

Early on Thursday, Trump had claimed that U.S. forces had taken custody of two high-value ISIS prisoners. The State Department confirmed this, but the SDF denied that any prisoners had been moved, claiming that U.S. special forces had instead increased their presence at the prison.

This was not the only issue where the SDF and Trump administration appeared out of sync. When asked by the National Interest whether she had met with any Pentagon officials since the announcement, Mohamad had a two letter answer: “no.”

This article has been updated to reflect a statement from the U.S. Mission to the United Nations that "[a]ny suggestion that the United States blocked a UNSC consensus statement on Turkey in closed consultations is utterly false."

Matthew Petti is a national security reporter at the National Interest and a former Foreign Language Area Studies Fellow at Columbia University. His work has appeared in Reason and America Magazine. Michael Greco, an intern in the Center for the National Interest’s Middle East program, contributed reporting.