Will the Syrian Kurds Ally With Iran and Russia Against Turkey? 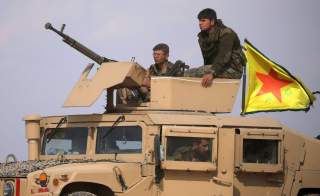 The Turkish military has begun bombing northern Syria, empowered by Donald Trump’s public announcement that he had green-lighted a Turkish operation into territory occupied by U.S.-backed Kurdish forces, essentially exposing a key ally in America’s fight against the Islamic State (ISIS) to new dangers.

Trump announced that the Turks had his blessing on Sunday. By Tuesday night, Turkish shells began flying across the border and opportunistic suicide bombers launched an attack on the Syrian Democratic Forces (SDF) in the former ISIS capital of Raqqa. The following day, Turkish president Recep Tayyip Erdoğan announced the beginning of Operation Peace Spring. By nighttime, Turkish tanks were rolling over the border.

The operation will include an army of Islamist rebels opposed to the government of Bashar al-Assad, Erdoğan claimed.

Kurdish leaders are now scrambling to prepare for the worst. Gen. Mazloum Kobani, the top SDF general, announced amid the haze of strategic surprises, diplomatic miscommunication, and public backpedaling, that an alliance with Assad against Turkey is “on the table.” The SDF is “ready” for talks with Assad, SDF-affiliated diplomat Sinam Mohamad told the National Interest. But Assad’s two main backers—Russia and Iran—are towing a careful line.

The Rojava Information Center, a media organization based in northeast Syria, confirmed to the National Interest that pro-Assad forces are massing near Manbij and Deir ez-Zour, but it’s not clear whether they will help or hinder the Turkish campaign. David Ignatius, a Washington Post columnist, claimed that Assad was mobilizing his forces for an invasion of his own.

On Wednesday, Iran signalled the opposite. According to the Associated Press, Iranian forces were conducting drills along Iran’s border with Turkey in the morning. By nightfall, Speaker of Parliament Ali Larijani cancelled his planned trip to Turkey.

Public statements from officials only make the situation murkier.

“The state of Turkey is worried about its southern border. To worry about this is its right,” said Iranian president Hassan Rouhani during a televised cabinet meeting. “But it must choose the correct path.”

“We don’t think that this path will be a beneficial path, a good path for the region, for Syria, for Turkey,” Rouhani continued. “The main problem now is not northern Syria, is not east of the Euphrates. Our first problem is Idlib. It is a place where all the terrorists have been gathered. We hope that other countries, especially Turkey, cooperate and focus on this problem so that we do not face a new problem.”

Idlib is the last province of Syria dominated by Islamist rebels. Turkey has several observation posts, which have been attacked by pro-Assad troops several times over the summer.

Russian leader Vladimir Putin called Erdoğan on Wednesday to warn him against endangering the peace process. According to a Kremlin readout of the call, both leaders agreed to preserve the territorial integrity of Syria.

“The Americans have established quasi-government structures there, keeping them functional and actively promoting the Kurdish issue in a way to cause dissent among the Arab tribes traditionally populating these territories,” he said, according to Russian state media. “Our stance unequivocally proceeds from the need to solve all problems of that part of Syria through dialogue between the central government in Damascus and representatives of the Kurdish communities that have traditionally lived in these territories.”

According to Fawri Hariri, an Iraqi Kurdish official who met with Lavrov, the Russian foreign minister promised to help mediate between Damascus and the Kurds.

“I think they'll try to reach arrangements with everybody involved. That’s certainly been the pattern to date with Russia in Syria, cutting deals with everybody,” said Anna Borshchevskaya, a senior fellow at the Washington Institute for Near East Policy.

“Iran’s established position has been to encourage the Kurds to reach a kind of compromise with Assad to prevent any kind of Turkish invasion in that part of Syria,” said Hamidreza Azizi, assistant professor of regional studies at Shahid Beheshti University in Tehran. “There have been real efforts in place by the Iranian side to push the two sides toward compromise.”

But the SDF is not just “the Kurds,” and has grown to include many anti-Assad forces under U.S. protection.

In a recent report published by the Wilson Center, Amy Austin Holmes estimated that between 50 percent and 70 percent of SDF fighters are Arab. About 60 percent of the fighters she interviewed told her that a political solution is impossible while Assad is in power.

Late on Tuesday, Iranian foreign minister Javad Zarif condemned any Turkish military action, but also brought up the Adana Agreement of 1999. In the pact, Syria had agreed to cut off its support for Kurdish guerrillas in Turkey and expel Kurdish nationalist leader Abdullah Öcalan.

“I think [Russia] wouldn't be happy with a major offensive, but at the same time, if there was a smaller incursion, they would not be as opposed to it as they publicly state,” Borshchevskaya said.

“For the likes of the [Iranian Revolutionary Guard Corps, and those that are actually present in Syria, they would rather deal with a Turkish presence than an American presence,” said Dina Esfandiary, International Security Program Fellow at the Harvard Kennedy School's Belfer Center. “Certain members of the Rouhani administration would rather have the Americans there, because at least they’re a presence that can be counted on, and they’re supposed to be helping the Kurds keep the peace, et cetera, whereas the Turks will not be able to do that.”

Soon after Turkey began its operations, Kurdish media reported that several ISIS women were reported to have escaped following at riot at al-Hawl. The Rojava Information Center told the National Interest that Turkish forces have bombed other prisons holding ISIS members.

When asked about the current situation, U.S.-led anti-ISIS coalition referred the National Interest to the Pentagon, which has yet not offered any comment.

Erdoğan hinted that he intends to stay in Syria for the long haul. At the United Nations General Assembly on September 24, he proposed extending a “safe zone” from the Turkish border to Raqqa and Deir ez-Zour—almost a third of Syria’s territory—to resettle three million Syrian refugees.

Turkish warplanes have bombed Ayn Issa, the capital of the SDF’s statelet, according to the SDF spokesman’s office. The Rojava Information Center and the Syrian Observatory for Human Rights have confirmed this.

In January 2018, Erdoğan had attempted this plan on a smaller scale. Turkish troops attacked the SDF in the enclave of Afrin, installing an Islamist rebel government in their stead. The Turkish-backed rebels confiscated property from locals, and took the opportunity to resettle thousands of refugees from elsewhere in Syria.

“[Iranians] are concerned that the Turkish invasion and the resettlement of the Syrian refugees—and those members of armed groups affiliated with Turkey—in the Kurdish areas will change the demographic structure of those parts of Syria to the detriment of the Assad government and Damascus,” Azizi said.

“I expressed my opposition in Turkey, and President [Rouhani] was also opposed to this matter. We believe that the rights of the Kurdish people in Syria must be protected. We believe in respecting the rights of all the people in the region, and international borders,” Zarif responded. “Of course, the security of Turkey must also be protected, but security is not protected by means of a military expedition.”