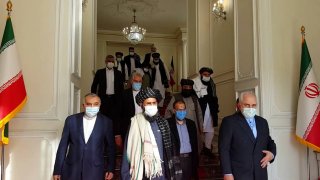 This diplomatic posturing comes after a Taliban delegation visit to Iran in late January, where Mullah Baradar met with Iran’s Foreign Minister Javad Zarif and the Secretary of Iran’s Supreme National Security Council Ali Shamkhani to discuss “relations between both nations as well as the political and security situation in Afghanistan and the region.”

Such public high-level meetings between Iran and the Taliban are singularly unprecedented, though perhaps more surprising was their similar stance on the Afghan peace process. Both parties view the United States as an “untrustworthy” actor that not only breaks its commitments but is also a destabilizing force that must be encouraged to withdraw from the region as a precursor for sustainable peace in Afghanistan and the greater Middle East. Nevertheless, Tehran used the talks to reiterate its strong opposition to violence (particularly in the Western provinces of Afghanistan bordering Iran), noting it will not recognize factions that seek to accumulate power through armed conflict in Afghanistan.

In recent weeks, unrest in Afghanistan has spiked together with the frequency of assassinations, generating a reaction from NATO Secretary-General Jens Stoltenberg, who called on the Taliban to reduce violence and cease supporting terrorist organizations like Al Qaeda. NATO stations approximately 10,000 troops in Afghanistan, tasked with training national security forces and the organization has warned its withdrawal is conditional on the Taliban’s fulfillment of the Doha agreement.

However, the reality on the ground suggests that the U.S.-Taliban peace deal has reached a stalemate with little progress in negotiations between the Taliban and the Afghan government. Political gridlock is baked in. On the one hand, Afghan President Ashraf Ghani continues to demand that the Taliban join the current political system and commit to a lasting ceasefire; on the other hand, the Taliban refuses to back down from its calls for the formation of a new Islamist political system.

With the intra-Afghan peace process technically on hold, all Afghan, regional, and international stakeholders are waiting for the Biden administration to review its Afghan policy and decide on the final timeframe for U.S. troop withdrawal from Afghanistan. Meanwhile, there is increasing urgency within Washington foreign policy circles to extend the May deadline for the U.S. withdrawal from Afghanistan “in order to give the peace process sufficient time to produce an acceptable result.”

Similarly, former Secretary of State Madeleine Albright and former EU High Representative for Foreign Affairs and Security Policy Federica Mogherini argued recently that the Biden administration must “prevent a reckless withdrawal that leads to state collapse, a civil war, and the revival of global terrorist haven.” What they do not recognize, however, is how any unilateral extension of the May deadline by the United States could lead to further exacerbation of violence and the continuation of the war in Afghanistan.

Biden can only choose between bad and worse options if he decides to continue Trump's unilateral peace process with the Taliban. However, there is still a third way to effectively mitigate and manage this dangerous situation—a multilateral solution applied successfully two decades ago. Active multilateral engagement with regional and international stakeholders is the most reliable course of action to achieve peace and stability in Afghanistan.

In 2001, at the time of the U.S. invasion of Afghanistan, the United States joined an informal coalition consisting of Iran, India, Russia, and the Northern Alliance (an Afghan opposition group) that had worked together to topple the Taliban since the mid-1990s. By means of such creative but bold (back-channel) diplomacy, Washington and Tehran, despite hostile relations, engaged in military and intelligence cooperation to fight the Taliban in Afghanistan.

In terms of more formal diplomacy, the United States became a member of a coalition named Six Plus Two, which included Iran, China, Pakistan, Tajikistan, Uzbekistan, and Turkmenistan, plus Russia, to address the Afghan civil war and the future of Afghanistan. In fact, the same group, along with Afghan opposition factions, later attended an UN-convened conference in Bonn where they successfully formed a moderate and internationally recognized Afghan government with an interim constitution, guaranteeing democratic elections and cooperation to fight international terrorism in Afghanistan.

Fast forward to today, the very same issues—from creating Afghan peace and stability to preventing that country from slipping into a failed state and becoming a safe haven for terrorist groups like Al Qaeda—remain shared concerns among key players in Afghanistan. Notable exceptions include the Taliban’s presence as an undeniable political force with a stake in Afghanistan's future, and the involvement of new actors in the Afghan peace equation, such as Turkey.

Last year, Zalmay Khalilzad, U.S. special envoy for Afghanistan Reconciliation, attended the “Six Plus Two” virtual meeting with diplomats present from Iran, Russia, and states neighboring Afghanistan. Such multilateral dialogue should be welcomed and encouraged, especially under the Biden presidency, and it should be recognized that neglecting to include important stakeholders like Tehran, Moscow, and Beijing have failed Afghan peace negotiations in the past. President Biden’s move to keep Khalilzad as the U.S. envoy to Afghanistan is already a positive sign and mark of prudence by the administration. And the Afghan peace process would certainly benefit if Khalilzad is directed by the White House to engage in more “Six Plus Two” track discussions.

No parties involved—including Iran and Pakistan—would benefit from a hasty American exit from Afghanistan if such withdrawal were to result in another failed state harboring international terrorist networks that threaten regional and global security. Following the Taliban’s visit to Tehran, Afghanistan’s Ministry of Foreign Affairs released a statement confirming that the Afghan government was consulted by the Iranians prior to the trip, highlighting that “Iran wants to ensure that the post-conflict Afghanistan does not turn into a safe haven for terrorist groups and it will remain a centre of regional and international cooperation.” In the same vein, Pakistani ambassador to the United States Asad Majeed Khan also signaled Islamabad’s willingness to mediate between the Taliban and the United States, stating that the United States should not decide unilaterally on the extension of the May deadline for a full troop withdrawal from Afghanistan.

If the United States wishes to extend an already planned withdrawal of its troops and ultimately end the longest war in American history, it must formally revitalize the “Six Plus Two” framework and expand it to include more regional and international actors, including NATO and the European powers. Afghanistan’s current security environment provides enough common ground for such a diverse coalition to take shape, building more leverage against the Taliban to guarantee the group will keep its end of the bargain and uphold the ceasefire.

Younes Zangiabadi is the Executive Vice-President at the Institute for Peace & Diplomacy.