Biden Wants to Focus on Unity, Has Little Interest in Trump Investigations 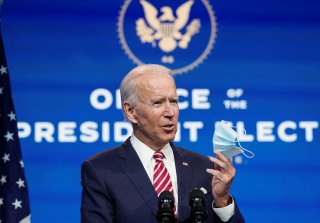 Since the start of his presidential campaign, presumptive President-elect Joe Biden has vowed to act as the unity candidate in a post-President Donald Trump era, with his most recent initiative aligned with that goal, as the former vice president has little interest in pursuing investigations of his predecessor, sources told NBC News.

Biden sounded the alarm that further investigations into the president would morph an even deeper divide in a country where he’s trying to be “a president for all Americans—whether you voted for me or not,” he said after media outlets declared his White House victory.

Multiple sources told the network that Biden specifically informed advisers that he’s circumspect in confronting Trump’s federal tax investigations or “any orders Trump may issue granting immunity to members of his staff before he leaves office,” according to NBC News.

Other advisers said Biden “just wants to move on” and focus on the economy, the coronavirus pandemic, climate change and race relations.

“Joe Biden’s purported decision not to pursue criminal investigation of Donald Trump makes sense both in terms of tactics and grand strategy. Tactically, it helps ease Trump’s exit from the White House; strategically, it avoids saddling the new administration with news coverage that would cause Biden's honeymoon period to evaporate quickly,” Donald P. Green, author and professor of political science at Columbia University, said.

Robert Y. Shapiro, a professor and former chair of the Department of Political Science at Columbia, echoed Green’s remarks adding, “why in the world would Biden and the Democrats want to keep Trump in the media limelight by going after him. They are much better of[f] focusing on the current pandemic and economic crisis to serve the nation and show they can provide the leadership that Trump and the Republicans have lacked, rather than going after a previous administration in a way they should not be doing. They should be thinking about how not to increase divisiveness and encourage cooperation.”

Biden’s directives, however, will not interfere with other investigations being pursued at the state-level, including Manhattan District Attorney Cyrus Vance Jr. ongoing battle in getting Trump’s tax returns.

The sources also noted that Biden doesn’t want to send the message to Trump officials and allies that he would abandon all allegations completely and make them think “there are no ramifications for any of their actions between now and the new presidency.”

While the president-elect’s move to prevent a more-divided country will be supported by some Democrats who blasted Trump for using his federal powers to influence the Justice Department’s investigations of members of President Barack Obama’s administration, it may also collide with top members of the party who have worked to convict the president during his White House term.

“Democrats have criticized Trump for wanting to go after members of the Obama administration as violating all manner of democratic norms, and Biden would be doing the same thing go[ing] after Trump using federal powers,” Shapiro said. “And Biden wants to restore normalcy and democratic norms and values.”

“Those who seek vengeance will have plenty of opportunities in state courts,” Green said.

Biden has said on several occasions that he would leave it up to his appointed attorney general to decide whether to continue to probe Trump, a Cabinet position he’s expected to name in upcoming weeks.