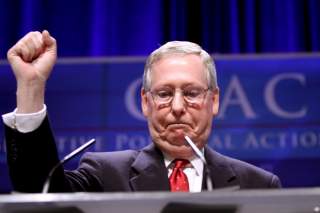 The midterm elections boiled down to this: The majority of Americans want to checkmate President Obama’s agenda. The voters delivered that message clearly on Tuesday. But now that they’ve done their job, the question is: Will those they elected, the Republicans, do theirs?

Most Americans are not happy about the direction of the country and how it is being led. Just a week out from the election, a CNN poll showed nearly seven of every ten Americans were “very angry” or “somewhat angry” about the way things are going in the country. And 60 percent said they were “very scared” or “somewhat scared” about how things are going. A FOX News exit poll found that nearly half (48 percent) of those voting on Tuesday expect life for the next generation of Americans to be worse than it is today.

Hope and change appear to have been replaced with disillusionment and uncertainty. From the inept rollout of Obamacare and the broken promises of better and cheaper healthcare, to our southern border being overrun and threats abroad finding their way here, Americans have lost faith in both the direction Mr. Obama has taken the country and the government’s ability to, well, govern.

That said, voters are clearly not enamored with Republicans. A Washington Post/ABC News poll from October showed 56 percent of voters had an unfavorable opinion of the GOP and even more, 66 percent, said they didn’t think Republicans in Congress have a clear plan for dealing with the main problems the nation faces.

But as it turns out, things are actually so bad in the minds of voters that they decided it was “better to throw out the devil you know than the devil you don’t.” The majority of Republicans just elected ran on repealing Obamacare and against giving amnesty to millions in the country illegally. But beyond that, there was no Republican agenda, such as the “Contract with America” the GOP ran on in 1994, that clearly outlined what Republicans would do if elected to make life better for the middle class and increase opportunities for Americans across the board.

Stopping the president and Democrats from railroading through more job-stifling mega-legislation such as Obamacare is certainly something voters want the GOP to do. And certainly they want Republicans to rein in the president’s imperial “phone and pen, go around Congress” strategy on issues such as immigration. But, if the GOP hopes to repeat its 2014 victories in 2016, it will have to do more than that. Congressional Republicans will have to lay out a plan, an agenda, that shows in very clear terms how their vision for leading and governing the country is both different and better than those the voters rejected on Tuesday.

Just two days after the election, House Speaker John Boehner (R-Ohio) and Senate Minority Leader Mitch McConnell (R-Ky.), penned an op-ed for the Wall Street Journal that indicates they know such policy ideas are needed. From authorizing construction of the Keystone Pipeline and simplifying the tax code to promoting patient-centered health-care reform, and tackling an education system that favors the bureaucracy over the students, Boehner and McConnell pledged the 114th Congress will address “head-on many of the most pressing challenges facing the country.”

Some of those endeavors, such as Keystone, will enjoy bipartisanship support. Others will require Republicans to articulate and pass bold policy ideas that they know Obama will likely veto.

American voters handed Republicans the job of checkmating President Obama, but they also gave them the opportunity to offer a new vision and lead the country in a new direction. It will be very difficult to succeed at the first without being wholeheartedly committed to the latter.

Genevieve Wood is senior contributor to The Daily Signal at the Heritage Foundation.