Big Trouble, Little Taiwan: Why Taipei Is Moving Toward a Confrontation 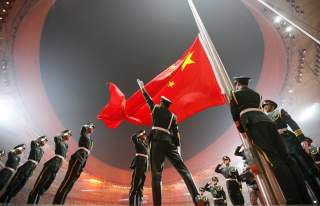 April 10 marked the fortieth anniversary of the Taiwan Relations Act (TRA). It was an opportunity not only to reflect on the long history of U.S.-Taiwan relations, but also to consider how well the TRA has stood the test of time. While the TRA, a domestic U.S. law, has played an important role in limiting efforts by Beijing to unify the island with the mainland over the last forty years, China’s military prowess has grown significantly in that time, and now represents a real threat to Taiwan’s de facto existence.

On March 31, two Chinese fighter jets crossed the median line of the Taiwan Strait into Taiwanese air space and refused to retreat for a twelve-minute period after being met by five Taiwanese fighter jets. The intrusion into Taiwanese airspace marked the first time since 1999 that the Chinese military intentionally crossed the median line, which was established in 1955 following the signing of a mutual defense treaty between Taipei and Washington in 1954—the precursor to the Taiwan Relations Act.

History of the Taiwan Relations Act

In the aftermath of defeat of the U.S.-backed Republic of China (ROC) military by Mao Zedong’s communist forces in China’s Civil War, and the retreat of the ROC leader Chiang Kai-shek and his nationalist forces to Taiwan in 1949, Washington formally guaranteed the security of the ROC on the island with the signing of the U.S.-ROC Mutual Defense Treaty in 1954, though at the time China’s People’s Liberation Army (PLA) lacked sufficient air and amphibious capabilities to invade the island. The treaty remained in effect until 1980, after President Jimmy Carter officially terminated diplomatic relations with Taiwan in favor of the People’s Republic of China (PRC) in 1979.

With the loss of a formal defense treaty, the U.S. Congress sought to limit the damage to U.S.-Taiwan relations and reassure Taipei of continued relations and U.S. military assistance, and so crafted a domestic law entitled the Taiwan Relations Act (TRA). Passed by Congress in 1979, the TRA made it the policy of the United States “to maintain the capacity of the United States to resist any resort to force or other forms of coercion that would jeopardize the security, or the social or economic system, of the people on Taiwan.” Along with the Six Assurances offered from the United States to Taiwan, the TRA has successfully framed the core of U.S.-Taiwan relations over the last forty years.

The Case for Stronger Support

Over the past forty years, while the TRA fell short of the harder security guarantees under the former mutual defense treaty, it has successfully served to limit China’s aggression toward Taiwan. Both states, however, have experienced significant changes in economic strength, military strength, and political governance. For Taiwan, the enactment of TRA in 1979 has allowed Taiwan’s nascent democracy to flower and eventually embrace the same principles of democracy, free and open markets, and respect for the rule of law which America has long trumpeted. U.S. military sales have periodically contributed to Taipei’s construction of a formidable defense of the island, though questions remain over how long the Taiwanese military is capable of holding off a prolonged assault by its much larger neighbor China before outside assistance is necessary.

China’s economic growth in the past four decades has allowed for significant resources to be spent on its military, and its official defense budget now stands at some fourteen times that of Taiwan’s once formidable military. China’s military now presents a formidable threat to Taiwan, and though Chinese president Xi Jinping’s rule is now indefinite, his recent saber-rattling around the island may be a sign his patience over unification is wearing thin. In the face of a grave and growing challenge to Taiwan’s de facto autonomy, is the U.S. Congress willing to improve upon the TRA and counter China’s aggression toward the island?

Some critics, such as Russell Hsiao, the executive director of Global Taiwan Institute, a Washington-based non-profit policy incubator, maintain that while the TRA has served as an effective deterrent, changes in China’s military strength now demand greater clarity of the U.S. commitment to defend Taiwan:

“As the PLA grows stronger, a perceived lack of commitment by the United States to defend Taiwan could further embolden Beijing to use force to resolve the Taiwan issue [2:46:33].”

This perceived lack of commitment is apparent to many Taiwanese, with slightly less than half (47.4 percent) confident of the U.S. sending troops to help defend Taiwan in the event of a Chinese attack, according to a poll taken last April. Some 41 percent of Taiwanese expressed doubts America would come to the rescue.

While the TRA demands the United States “maintains the capacity to resist any resort to force,” the question of whether or not to respond, and how to respond, is left to the president and Congress, who “shall determine, in accordance with constitutional processes, appropriate action by the United States in response to any such danger.” While nonbinding, the ambiguous language of the Act is similar to that found in many U.S. mutual defense treaties—and reflects the necessity of not drawing red lines in fluid environments—leaving the decision to respond militarily more dependent on political will than law.

The Use of Soft Power In Building a Responsible Stakeholder

While the fortieth anniversary of the TRA provides an opportune time for Congress to address any weaknesses of the Act, it appears any proposed legislation will fall far short of any calls for clarity, or strengthening of the use of U.S. hard power to defend Taiwan. Rather, Washington seems intent on bolstering Taiwan’s soft power—fighting for its diplomatic recognition and international participation. Since the start of the year, members of Congress have introduced legislation intended to improve upon the TRA, including several bills to help Taiwan regain observer status in the World Health Organization, to make clear the U.S. One-China Policy does not commit it to the PRC's One-China Principle, and to reaffirm U.S. commitment to Taiwan and to the implementation of the TRA.

If passed, these laws would join or reaffirm similar soft power legislation passed last year by the U.S. Congress, including the Taiwan Allies International Protection and Enhancement Initiative (TAIPEI) Act and the Taiwan Travel Act—to “encourage visits between U.S. and Taiwanese officials at all levels.”

While a steady diet of supplements of regular defense arms sales and a steroid booster of stronger security guarantees would no doubt contribute to the overall fitness of the forty-year-old TRA, for now, U.S. lawmakers appear reluctant to upset the delicate tripartite balance while major trade negotiations are underway between the U.S. and China. Or perhaps many U.S. legislators are comfortable with the ambiguity of the U.S. commitment under the TRA (e.g. willing to defend Taiwan in the event of an invasion, but unwilling to respond should Taipei declare independence). Or possibly they are reflecting the views of their constituents, many of whom do not want the United States to enter into another major war, especially over a tiny island some still confuse with Thailand. A poll taken by the Chicago Council on Global Affairs in October revealed only 35 percent of Americans would support U.S. military action to defend Taiwan if the island is attacked.

With proposed congressional hard-power legislation currently limited to a reaffirmation of the U.S. commitment under the TRA, efforts to improve upon U.S.-Taiwan relations should continue to focus on building Taiwan’s soft power while at the same time broadcasting its emergence as a model democracy in the region. Despite significant strides in growing its economy and developing its democracy, the Taiwan story is yet to be fully appreciated; telling that story could go a long way toward building the U.S. political will and worldwide sympathy necessary to help defend its cause as a responsible stakeholder in the international system.

Gary Sands is a senior analyst at Wikistrat, a crowdsourced consultancy, and a Director at Highway West Capital Advisors, a venture capital, project finance and political risk advisory. A former diplomat with the U.S. Overseas Private Investment Corporation, he has contributed a number of op-eds for Forbes, U.S. News and World Report, Newsweek, Washington Times, The Diplomat, Asia Times, National Interest, EurasiaNet, and the South China Morning Post. He is now based in Taipei, Taiwan.