Bill Clinton Gets Intimate with America 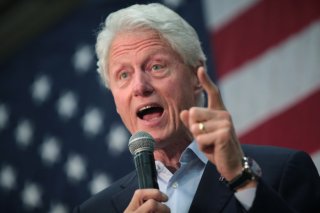 President Bill Clinton has held a major role at each Democratic National Convention since 1980, when he was the youngest governor in the country, representing Arkansas at thirty-two years old. He would go on to lose reelection later that year, but would exhibit the political dexterity and resiliency two years later to win back the governor’s mansion and set out on a course that defined the next two decades of his political life. In recent years, as Democrats such as William Galston of the Brookings Institution are lamenting, the party has moved sharply to the left--abandoning the centrist, tough on crime and welfare policies that Bill Clinton espoused. Hillary now confronts a party that is in revolt against the policies that the Clintons promoted. It must be an odd feeling for Clinton--on the one hand exhilaration at her ascent; on the other inner doubts about the party's course?

He served for nine years as governor over a span of four terms, and was the first Democratic Party presidential nominee to win Louisiana, Arkansas, Tennessee and Kentucky since 1976. He was reelected for a second term as president in 1996 with a nine-point surplus against GOP nominee Bob Dole.

With the exception of Jimmy Carter, Bill Clinton has been the most active former president in modern American history. The 2012 keynote address at the Democratic convention, in which Bill Clinton took the stage and introduced President Barack Obama to the delegates, was one of his more memorable performances. Clinton's speech last night was the exact opposite of his fiery appearance four years earlier. This time, Clinton had a job altogether different from trashing the Republican nominee and firing up the Democratic base; instead, he had to persuade fervent Bernie Sanders supporters and on-the-fence independent voters who haven’t yet made a decision that his wife of forty-one years, Hillary Clinton, was both the best choice for American families and the responsible and sober pick for Commander-in-Chief during dangerous times.

Nobody knew what the former president was going to say. The fact that the speech was kept under lock-and-key until just before Bill Clinton took the podium only added to the intrigue. But what came out of the nearly hour-long address was a simple, but personal message that only a husband could convey: Hillary has never given up in her life, nor will she ever give up improving the lives of the American people as President.

Bill Clinton can command an audience with the slight tip of his finger, and he didn’t break from that precedent. Last night Bill explained how he first met Hillary at Yale so many years ago. By his account, he was a bumbling, scared kid who couldn’t muster the courage to approach Hillary and talk to her. It was Hillary, he said, you actually walked up to him and got the conversation rolling. “She closed her book,” Bill recollects, “put it down and started walking toward me. She walked the whole length of the library, came up to me and said, look, if you’re going to keep staring at me, we at least ought to know each other’s name. I’m Hillary Rodham, who are you?”

Beyond personal stories, President Clinton sought to construct a case that explained how Hillary developed the traits and temperament for the presidency. “She is still the best darn change maker I have ever known,” President Clinton said.

One of the most interesting aspects of the speech was when President Clinton discussed Hillary’s political orientation. By bringing up her conservative father, Bill Clinton was trying to suggest that Hillary is not your grandfather's liberal. He portrayed a pragmatist who grew up with conservatives in her very own home, which provided her with a perspective that most Democrats in the Northeast or West Coast don’t get to experience. Her childhood and conversion from “Goldwater Girl” to progressive is supposed to reassure voters that Hillary knows how to harness together people with different political philosophies and get them to focus on a common goal. Mentioning Hillary’s work with former Republican House Majority Leader Tom Delay on adoption reform, for instance, wasn’t an accident.

Last night made it clear that he has embarked upon his most intimate mission: selling Hillary as president. Will there be enough buyers?