Bill Clinton Ignored Genocide in Rwanda. Will Joe Biden Ignore it in China? 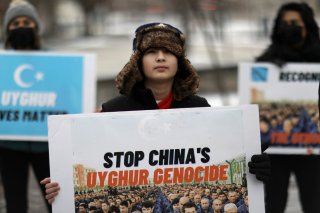 The Clinton administration chose not to call the mass murder of up to 800,000 ethnic Tutsis in Rwanda “genocide” because it felt the designation would legally require the United States to take action. And because it feared the political inconvenience.

President Joe Biden is now facing a similar political conundrum with the Chinese government’s ongoing genocide of ethnic Uighurs in the Xinjiang region. It appears that he is backing away from doing anything just as the Clinton administration did nothing to stop the genocide against Africans.

As a CIA analyst, I personally witnessed President Bill Clinton’s shocking dereliction of duty, along with that of his aides, during the April 1994 mass murder in Rwanda. The Clinton National Security Council instructed the CIA not to use the word “genocide” to describe these killings. This was because Clinton officials believed that the use of the word would compel the United States to take action under the 1948 Genocide Treaty, officially known as the Convention on the Prevention and Punishment of the Crime of Genocide.

Even though Clinton officials had plenty of warning that mass killings in Rwanda could occur, it prevented the UN from acting in advance of the genocide. After the genocide began, the Clinton administration still prevented the UN from acting because of the political damage the administration had incurred from the failed peacekeeping missions it promoted in Bosnia, Somalia, and Haiti.

Future UN Ambassador Samantha Power wrote in a 2001 Atlantic article that a young National Security Council aide named Susan Rice stunned attendees at a late April 1994 NSC meeting when she revealed the political motivations for why the Clinton administration would not call the killings in Rwanda genocide.

According to Power, Rice said: “If we use the word 'genocide' and are seen as doing nothing, what will be the effect on the November [congressional] election?"

Rice confirmed that the Clinton administration was more worried about giving Republicans ammunition to attack its foreign policy than preventing the mass murder of Africans.

The following month, after downplaying the atrocities, Clinton officials admitted there may have been “acts of genocide” in Rwanda but would not say genocide took place, in order to avoid triggering the Genocide Convention.

Bill Clinton later apologized for the way his administration mishandled the Rwanda genocide. He passed the buck to his aides, claiming that he would have taken action had he known more about this situation. Numerous experts and studies have proved Clinton and his senior aides were well aware that genocide was taking place but decided to take no action and prevented other countries from doing so.

The Genocide Convention does not require going to war. It provides numerous ways to hold genocidal governments accountable including sanctions, travel bans on government officials, and refusing normal diplomatic relations.

Today there is undeniable proof that the Chinese government is committing genocide against its Uighur Muslim minority in Xinjiang.

The Essex Court Chambers in London, a group of distinguished British attorneys, recently provided the latest confirmation of China’s genocide. Its detailed 100-page opinion shows that these atrocities include mass incarceration, enslavement, torture, and rape. The opinion also said there is a deliberate effort by the Chinese government to destroy the Uighur community through “measures to prevent women giving birth - including sterilization and abortion - and the forcible transfer of Uighur children out of their community.”

Last August, the Biden campaign unequivocally stated that the Chinese government’s persecution of  the Uighurs was genocide when it said, “The unspeakable oppression that Uighurs and other ethnic minorities have suffered at the hands of China's authoritarian government is genocide and Joe Biden stands against it in the strongest terms."

As president, Biden did not reverse the Trump administration’s eleventh-hour decision on January 19, 2021, declaring China’s persecution of the Uighurs as genocide. Secretary of State Antony Blinken stated his support for the Trump policy during his confirmation hearing the day the policy was issued, and after he was sworn in on January 27.

Thus, President Donald Trump’s determination of genocide against the Uighurs by the Chinese government is still official U.S. policy.

Yet it now appears President Biden does not plan to honor America’s obligation under the Genocide Convention concerning Beijing’s atrocities against the Uighurs.

When CNN questioned Biden whether he raised the Uighur genocide in his recent two-hour phone call with Xi Jinping, Biden countered by saying this is an issue of different “cultural norms.” He added a comment that appeared to justify Beijing’s persecution of the Uighurs by claiming China has been victimized by the “outer world” in the past when it was not united, and claimed that Xi is only trying to unify the country by creating a “united and technically controlled China.”

Let’s hope that gaffe-prone President Biden misspoke and that an aide will clarify his remarks, and that the administration will take action to prevent further atrocities and punish the perpetrators.

This means ceasing normal relations with Beijing until the genocide against the Uighurs ends. It could include strong trade sanctions and travel bans against Chinese officials and their family members. American firms also must be prohibited from any trade involving Xinjiang’s labor camps.

The Biden administration also should lead a global boycott of the 2022 Olympics in Beijing.

The Canadian Parliament passed a resolution this week declaring the atrocities being committed against Uighurs as genocide and calling on the International Olympic Committee to move the 2022 Olympic Games from Beijing. America, not Canada, should be leading on this grave humanitarian crisis.

It’s not too late for President Biden to live up to his responsibility as the leader of the free world to make it clear to Beijing that there will be no business as usual with the United States until the Uighur genocide ends and those responsible for it are held personally accountable.

Fred Fleitz, president of the Center for Security Policy, served in 2018 as deputy assistant to the president and to the chief of staff of the National Security Council. He previously held national-security jobs with the CIA, the DIA, the Department of State, and the House Intelligence Committee staff. Twitter @fredfleitz.