The Bipartisan Path to Confirming Colin Kahl Runs Through Iraq 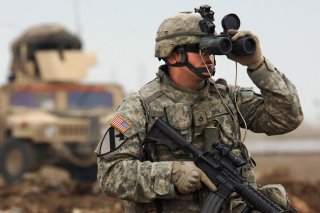 President Ronald Reagan’s Director of Personnel Scott Faulker once said that “Personnel is policy.” This became a common refrain during the Reagan years, referring to the fact that enacting policy decisions was as connected to those appointed down the chain of command as it was to who led a given office. The same is true today in government as it was then. In the wake of Neera Tanden’s failed nomination as Office of Management and Budget Director, Colin Kahl’s embattled confirmation for the position of Deputy Under Secretary of Defense for Policy has become the frontline battle waged by Republicans in Congress to shape the Biden administration’s personnel policy. The nomination’s advance from the committee on a thirteen to thirteen tie along party lines still faces some procedural obstacles with no Democrat votes to spare in the evenly divided Senate.

Kahl has come under fire primarily for inflammatory social media posts, his role in the Iran nuclear deal, and previous support for associated sanctions relief, along with vocally opposing the Trump administration’s decision to move the U.S. embassy in Israel from Tel Aviv to Jerusalem. In addition to the opposition from Republicans during his March 4 hearing before the Senate Committee on Armed Services, a growing number of op-eds have called for blocking Kahl’s confirmation on the grounds that he is a poor choice for Israel and the United States’ other regional allies, and that a no vote for him will push the Biden administration toward an approach to the Middle East “that better serves America’s national interest.”

However, before the partisan controversies of the past several years, Kahl’s track record on Middle Eastern policy during the Obama administration’s tenure, especially regarding Iraq, has demonstrated considerable foresight and a productive relationship with the U.S. military, including working closely with then-General Lloyd Austin. Just as important for Republicans and potentially wavering Democrats to consider, Kahl’s views were often at odds with what ultimately became the administration’s policy. Kahl’s actions dating back to his days advising Senator Barack Obama’s presidential campaign on Iraq suggest he is a centrist Democrat with whom Republicans can find common ground in many areas of defense policy, including not just Iraq policy today, but also nuclear weapons modernization and countering China.

In addition to the case for Kahl’s nomination, there is a strong argument for filling the Pentagon’s policy shop position. As one of the most important jobs in the federal government beneath the cabinet level and the third-highest ranked position in the Pentagon, the policy deputy is central to determining any administration’s defense and national security policies. They also represent the Defense Department at National Security Council deputy meetings. During the Trump administration, there was considerable upheaval in the policy position, along with the Pentagon more broadly. Only John Rood was confirmed by the Senate, serving shortly longer than two years. Five other officials occupied the position in varying levels of acting capacity for the balance of President Donald Trump’s tenure. The timing of Rood’s confirmation was fortuitous in that he had the full power of the position to oversee the implementation of the 2018 National Defense Strategy released by Secretary of Defense Jim Mattis. Acting officials are generally highly-qualified professionals, but the Vacancies Act limits their tenure and generally precludes their involvement in long-term policy initiatives.

Kahl’s tenure as Vice President Joe Biden’s National Security Adviser between 2014 and 2017 was undoubtedly a top reason why he was nominated for the Pentagon’s policy position. Prior to this, Kahl also worked under Secretary of Defense Robert Gates as Deputy Assistant Secretary of Defense for the Middle East between 2009 and 2011. While advising Obama’s presidential campaign in October 2008, Kahl accepted General Ray Odierno’s invitation to attend a strategic review session in Baghdad pertaining to the Status of Forces Agreement negotiations taking place between the Bush administration and Iraqi government of Prime Minister Nuri al-Maliki. Kahl subsequently urged the campaign to avoid criticizing the agreement, explaining in an email, “If we win the election we don’t want to have our Iraq policy consumed by renegotiating the agreement in the early portion of 2009.”

The pragmatism of this position aside, Kahl had closely studied Iraq and the U.S. war there since 2003. Expressing views that continued during his tenure serving in the Obama administration, Kahl and a colleague debated fellow Democrat Steve Simon in Foreign Affairs, arguing against a precipitous withdrawal of U.S. troops from Iraq that was not linked to the security and political situations. He further argued for U.S. pressure on Maliki towards genuine national reconciliation and continued support for the U.S. military’s local partners in the Sons of Iraq movement. While Kahl later publicly defended the Obama administration’s Iraq policy, unsurprising for a former and future official, his work consistently demonstrated a non-partisan seriousness in matters of life and death for thousands of Americans and Iraqis. As Democrats tapped into growing opposition to the Iraq War to retake Congress in 2006, Kahl had spent the previous year working in the Office of Secretary of Defense on a fellowship, conducting field research on counterinsurgency and stability operations in Iraq.

Senate Republicans and Kahl have substantive disagreements about the latter’s role in the Obama administration’s more polarizing Middle East policies, to say nothing of his views on the Trump administration’s Middle East policy. Nevertheless, with major decisions on the horizon regarding the future status and responsible withdrawal of U.S. military forces from both Iraq and Afghanistan, Kahl’s experience and expertise working on these issues will benefit not only the Biden administration’s decision-making process, but also serve U.S. national security policy. Practically speaking, Senate Republicans are unlikely to encounter more of a centrist Democrat tapped for the job, especially considering the nomination agenda of their progressive Democrat colleagues. Filling the Deputy Under Secretary of Defense for Policy position will also help Secretary of Defense Austin utilize as much of his staff currently possible in coordinating defense policy to tackle the full range of geopolitical challenges facing the United States today.

Michael Brill is a Ph.D. candidate in the Department of Near Eastern Studies at Princeton University, where his research focuses on Iraq.