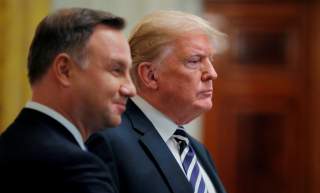 Poland’s President Andrzej Duda will visit the White House on June 12, his second working visit to Washington in two years. Last September, Duda made headlines by lobbying for a permanent American military base in Poland, which he jokingly called “Fort Trump.” This time, the big issue is energy.

Energy security is no joke for Poland, which relies on Russia for much of its oil and natural gas. That’s not by choice. When the Soviet Union occupied Poland and the rest of Eastern Europe, it forced them to become customers of Russian energy. Thirty years after the fall of communism, pipeline politics still dominate Polish diplomacy.

Poland’s current government, led by the controversial Law and Justice Party (known by its Polish acronym, PiS), has made energy diversification a cornerstone of its relationship with the United States. It’s no coincidence that Duda’s second stop on this visit will be Houston, Texas, the hydrocarbons capital of the world.

The PiS and many of its leading figures (though not Duda himself) have been condemned for making insensitive remarks about homosexuals, refugees, and the Holocaust. The party has also been criticized for its legal reforms, which opponents portray as a political takeover of the country’s highest courts.

Less well known are the party’s progressive social policies, including increased parental leave time, increased child subsidies, and programs to reduce barriers for the disabled. Moreover, despite warnings that these policies would bust the budget, the PiS government has managed substantial deficit reduction over its four years in office.

Though Duda hails from the governing PiS party, he is not the political head of government but the ceremonial head of state. Duda thus resigned his party membership in 2015 when he won the Presidency with 51.5% of the vote. Now nominally an independent, he is (according to the latest polls) the most trusted politician in Poland.

In talks with President Donald Trump, Duda will focus on a wish list that unites virtually all Poles: the desire for American troops, American investment, and American natural gas.

Poland is on the North Atlantic Treaty Organization’s front line with Russia and Belarus and is one of the few NATO countries that meets its “Article 5” commitment to spend at least 2 percent of GDP on defense. While in Washington, Duda is also expected to officially announce the purchase of thirty-two American-made F-35 fighter jets. He will also lobby Trump to relocate more American troops from bases in Germany to Poland.

Duda will also be looking for more American investment in Poland, which has the fastest-growing economy of any of the European Union’s larger member states.

But the big issue is energy. Poland depends on Russia’s state-owned giant Gazprom for roughly half of its natural gas, which is used for domestic heating and cooking, in addition to power generation. Poland has plenty of coal for electricity, but it relies heavily on Russia for oil and gas. In a pinch, oil can be trucked in from neighboring countries, but natural gas can’t.

While neighboring Germany has doubled down on Russian gas supplies, financing large-scale undersea pipelines to bring Russian natural gas directly to Germany, Poland has been working hard to wean itself off Russian supplies. It opened a major liquefied natural gas (LNG) import terminal in 2015, and a major expansion is scheduled for completion in 2023.

Poland is also cooperating in a pipeline project to bring Norwegian gas to Poland via Denmark, starting in 2022. There are also credible plans to link Poland to gas distribution systems in Slovakia, the Czech Republic, and the Baltic States.

Once these projects come online, Poland will shift from being dependent on Russia gas to being a major gas hub for Eastern Europe. That transition involves American gas, American technology, and American energy expertise. Trump will be looking to sell to Poland every bit as much as Duda will be angling for American political support.

All of this transcends party politics. Whatever you may think of Poland’s governing party—and there are many critics, both at home and abroad—everyone can agree that Poland’s energy security is a goal worth pursuing. And whatever you may think of Donald Trump, helping Poland gain its energy independence is something you can support. Poles of all political persuasions are united on this issue. The rest of us should be, too.

Salvatore Babones is an adjunct scholar at the Centre for Independent Studies in Sydney, Australia, and an associate professor at the University of Sydney.