The Blame Game Starts on Afghanistan 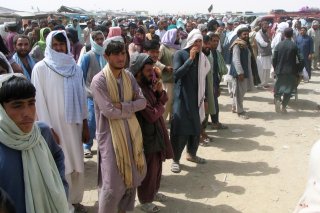 At the time of writing this, the Taliban blitz has resulted in the capture of ninety-two percent of the Afghan landmass and the capture of the Afghan fifth army corps with the billions of dollars in military equipment donated by U.S. taxpayers. Mazar-i-Sharif, an anti-Taliban bastion and the first town to fall to the coalition forces of Northern Alliance and the United States in 2001, has fallen again and is now back in the hands of the Taliban, with the local warlord the anti-Soviet Abdul Rashid Dostum fleeing. Kabul is under siege, with one corps and one commando group being under direct government control. The history of feudal Afghanistan, with cities constantly changing rulers, apparently continue to this day, a blistering end to the twenty years crisis.

Almost like clockwork, however, this new carefully constructed blame game is starting to appear, which blames Americans, especially the administrations of Donald Trump and Joe Biden, for failing to protect and ensure women’s rights in Afghanistan. Curt Mills quipped, justifiably, that Americans shouldn’t be lectured by the Brits on military matters. The cause being that the Economist, wholly incorrigible by the last twenty years, published an article that blames America for doing too little. “Ideally, America would not be withdrawing its forces at all. For several years, with only a few thousand troops who sustained few casualties, it had managed to maintain a stalemate between the Afghan government and the Taliban, thanks largely to air power.” The American presidents are to blame, for listening to what the overwhelming majority of American people desire. “Mr. Trump wanted a quick end to the twenty-year deployment, and President Joe Biden has stuck by that callous decision.”

Never mind how unsubstantiated this claim is. The Afghan army melted away because an army needs a vision to fight. What were the Afghan army fighting for? Democracy and liberalism are alien to that place, and most of the foot soldiers probably identify with the Taliban and their harsh legitimacy. The idea that keeping five thousand American soldiers would have sorted that is frankly clownish. The soldiers were there without casualty because there was a negotiation going on and the peace was temporary and contingent on the withdrawal of Western troops. At the first risk of that being cancelled, the only option would have been to counter escalate against the inevitable Taliban blitz. There never was going to be a status quo with five thousand troops.

But it’s not just the Economist. The Wall Street Journal editorial board blamed Trump and Biden, and not the mighty three hundred thousand strong Afghan army for its collapse, writing, “Both men were so determined to get political credit for bringing the troops home that they failed to face the consequences.” Fred Kagan of the American Enterprise Insistute laments in the pages of the New York Times that America chose not to defend Afghanistan, as does Bill Kristol on Twitter. Most bizarrely, the president of the Open Society Foundation wrote an op-ed, on how we should continue the struggle against misogynistic Taliban. How to do that? “…donor governments and private funders must back the local Afghan groups and individuals who have been courageously speaking up for good governance, the rule of law and human rights. They include women’s groups, independent journalists, and voices representing religious and ethnic minorities whose views must be reflected in any negotiation between the government and the Taliban.” One needs a heart of stone not to laugh, to see all the talks of “empowered women and civil society,” facing the reality of what actual power looks like.

But what of the U.S. intelligence and military leadership that lied to the American people for twenty years stating that change was “just around the corner” and one more year will turn Afghanistan to Denmark? One understands that in the twenty-first century and our advanced democratic age, it is not considered proper to talk in terms of strategic interest. This is why realism (fundamentally a narrow conservative worldview determined by national interest) can never be sold under a humanitarian umbrella, and sometimes politicians are compromised by political compulsions. To couch a realist policy action (in this case to cut losses and withdraw from Afghanistan) which is amoral and detached by definition and unconcerned about humanitarian tragedies is increasingly under stress due to the compulsion for rhetorical liberalism, and the disconnect is comical to observe. But the job of the military and intelligence were to be straightforward in assessment, honest to their leaders, and execute a policy efficiently which was decided by the democratically elected civilian leadership. In all of those counts, the U.S. military and intelligence leadership failed.

It is important at this juncture, to remember, that this could have been avoided. Not the Taliban’s eventual control of Afghanistan, but the loss of equipment, or for that matter, the loss of trillions of dollars. The withdrawal from Afghanistan was more or less planned in 2019, and the eventual end date was fixed by May 2021. The Pentagon had a year and half to prepare, but delayed it, as they thought President Biden would reverse President Trump's decision. In a normal country, there would be consequences for this unprecedented intel failure and military incompetence. The idea that one can install liberal rights in Afghanistan, when Afghan governors and thousands of soldiers are simply switching sides, is so incredible, that it is moderately frightening that anyone espousing such is anywhere close to power, in either the UK or the United States.

And that applies to the “allies” too. It’s very easy to say that any individual who wants to fight the Taliban, is are free to "do an Orwell" so to speak, form republican bands, buy weapons and ammunition and head to the Afghan civil war.  But likewise, if any country, China, India, or Britain and the EU, are so bothered by the American withdrawal, they are more than welcome to head to the land and try their luck in nation-building. Twenty years of liberal world order dependant on hegemonic blood and treasure has often resulted in smaller powers taking the U.S. alliance for granted. If any ally considers permanently imperial policing in Afghanistan as the test of reliability, then that ally is an unreasonable one, and Americans should ask whether that commitment is worth it. Allies don’t get to decide the grand strategy of the superpower, just like provinces don’t get to decide the foreign policy of the imperial core.

The questions one needs to ask are these: Why are hundreds of thousands of Afghan men fleeing to Europe, instead of taking up arms, and why is it American or Western burden to ensure good governance, or more comically, “women’s empowerment” in Afghanistan? There is plenty to criticise both Trump or Biden for depending on where one stands politically, but surely safeguarding women's rights in a semi-feudal region is not the burden of American taxpayers, at the cost of American treasure and blood. President Biden came out with a lengthy statement, but the crux of the argument was that it is neither western burden or responsibility. “Over our country’s twenty years at war in Afghanistan, America has sent its finest young men and women, invested nearly $1 trillion dollars, trained over 300,000 Afghan soldiers and police, equipped them with state-of-the-art military equipment, and maintained their air force as part of the longest war in U.S. history. One more year, or five more years, of U.S. military presence would not have made a difference if the Afghan military cannot or will not hold its own country.” He is correct. One cannot install liberal feeling and nationalist fighting spirit in places where nothing other than tribal loyalty ever existed. Some places are perhaps never going to be either liberal or democratic without centuries of colonization. Thirty years of that delusional fever about human nature, geography, history and culture are breaking in the dusty mountains of Afghanistan.

Dr. Sumantra Maitra is a national-security fellow at the Center for the National Interest; a non-resident fellow at the James G Martin Center; and an elected early career historian member at the Royal Historical Society. You can find him on Twitter @MrMaitra.