The Blob Strikes Back 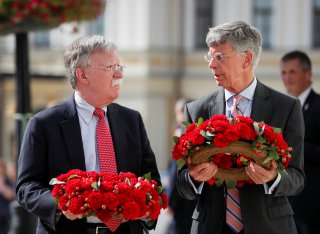 President Donald Trump campaigned and was elected on a platform of improved relations with Russia. Yet, three years after his election, no real improvement has materialized and, if anything, they have deteriorated. Why?

One reason is that those who seek to repair the damage caused by a thirty-year deterioration in trust and cooperation face an uphill battle against what recently has been given the colloquial name, “the Blob.” The term, coined by Obama White House staffer Ben Rhodes, refers to the foreign-policy establishment, mostly located in Washington, DC and constantly focused on the putative decline of American influence abroad. It has been distinguished by its unwillingness, or inability, to reconsider or reprioritize national interests that were first defined after World War II, and then continued, by and large, on auto-pilot after the end of the Cold War. Now Trump is taking a wrecking ball to this world order. But a self-anointed mandarin class or, if you prefer, deep state, that has largely operated unmolested until the advent of Trump and now appears to believe that it can foil, or even subvert, the policies of a president it deems unfit for office, a development that should worry Democrats and Republicans alike.

Another reason is that Trump himself has been largely indifferent to who assumes positions in his administration, calculating that by sheer force of will he, and he alone, can be the decider. In September, Trump referred to his search for a fresh national security adviser in the following terms: “It's great because it’s a lot of fun to work with Donald Trump, and it’s very easy, actually, to work with me. You know why it’s easy? Because I make all the decisions. They don't have to work.” This insouciant approach has now boomeranged on Trump.

Enter William B. Taylor, Jr. Taylor has been the U.S. Chargé d 'Affaires Ukraine since June of this year (having previously held the position of ambassador 2006–2009), and yesterday he testified behind-closed-doors as part of the House impeachment inquiry into Trump. Taylor, as his testimony made clear, was able to observe first-hand many of the Trump administration’s ham-fisted moves to extract, in one form another, concessions from Ukraine. But however clumsy and counterproductive Trump’s moves may have been, Taylor offered an overly simplistic survey of events in the region. Indeed, his Manichean introductory and concluding remarks suggested that he views Russia as an inveterate enemy of America and Ukraine as a white knight.

In his opening statement, Taylor emphasized that Ukraine is a strategic partner of the United States that is “important for the security of our country as well as Europe,” as well as a country that is “under armed attack from Russia.” Well, yes. But this sweeping description occludes more than it reveals. Foreign policy is rarely a morality play and the fairy-tale that Taylor presented was more redolent of a post–Cold War cold warrior who, like too many of his colleagues at the foreign desk, are committed to retrograde thinking, than of an official offering an incisive look at a complex and troubled region. It is not as though Ukraine, where Taylor served as ambassador during the George W. Bush administration, has ever been free from the plague of corruption or murky machinations by local competing factions. Reflexively taking the side of Ukraine does not serve American interests any more than trying to pummel it for political favors. The testimony of Taylor and other State Department witnesses before the House Intelligence Committee is a case in point.

“The four U.S. diplomats [Taylor, former ambassador Marie Yovanovitch, former special representative Kurt Volker, and Deputy Assistant Secretary of State George P. Kent] are all wedded to a policy maximally supportive of Ukraine's ‘Revolution of Dignity’ and all that implies. That is the policy we arrived at in the previous administration, for better or worse, and it continues to be the ‘official’ policy given strong bipartisan support in Congress,” explains John Marshall Evans, a retired U.S. Foreign Service Officer who previously served as ambassador to Armenia. Evans adds that Taylor “did a great job running the assistance programs for the former USSR. Everyone respected him highly, and liked him.”

The narrative in the lengthy opening statement by Taylor, however, tends to obfuscate the reality of the turmoil in Ukraine, where street protests in 2014, at least partially cheered on by the Obama administration, most notably Assistant Secretary of State for European and Eurasian Affairs Victoria Nuland, toppled the democratically elected government of President Viktor Yanukovych. Russia responded swiftly by annexing the Crimean Peninsula, where a military base has been located for decades.

Taylor emphasized that in the aftermath of these dramatic events, he favored the sale of lethal weapons to Ukraine, which the Obama administration demurred on. President Barack Obama was cautious about committing to Ukraine—and the visible presence of neo-Nazi, white supremacist militias did not help.

During his testimony, Taylor recounted that on a visit to eastern Ukraine, “Ambassador Volker and I could see the armed and hostile Russian-led forces on the other side of the damaged bridge across the line of contact. Over 13,000 Ukrainians had been killed in the war, one or two a week. More Ukrainians would undoubtedly die without the U.S. assistance.” What goes unmentioned is that many of the dead are Eastern Ukrainians with deep language and cultural connections to Russia, who acted upon secessionist impulses only after the emergence of the new regime in Kiev.

A New York Times article yesterday described Taylor as a “model diplomat,” and used favorable quotes only from those associated from the same doctrinaire foreign-policy establishment. Even the phrase “model diplomat” was provided by Strobe Talbott, President Bill Clinton’s deputy secretary of state (and former roommate at Oxford) who was the architect of the post–Cold War NATO expansion which kickstarted the trend of souring relations with Russia.

The New York Times also published, in the fall of 2018, an anonymous op-ed from a “senior official in the Trump administration” who wrote that he and others were “working diligently from within to frustrate parts of his agenda and his worst inclinations,” with the premier example given as Russian-American relations. Now this figure, who apparently remains ensconced in the Trump administration that he or she so reviles, is about to publish a “tell all” book about the administration next month, still anonymously.

“President Trump obviously wants better relations with Moscow, but Ukraine is an obstacle to that, and he has the entire Blob against him. It is not a crime to advocate for a change of policy, or, if one is president, to change the policy, but Trump probably hasn't a clue how to do that correctly, so he sought to work around the existing structures, which must frustrate him,” Evans observes.

Others take an outright critical view of Taylor and Co. “Taylor’s testimony shows he believes that the constitutionally elected head of the executive branch is supposed to serve unelected officials like himself. He personifies what Obama administration officials characterized as ‘the blob,’” says Daniel McCarthy, a columnist for SpectatorUSA.

Will anything change now that the fight between Trump and the permanent bureaucracy is now in the open? On Tuesday night, Vice President Mike Pence told Laura Ingraham, host of Fox’s The Ingraham Angle, “There is no question when President Trump said we were going to drain the swamp, but an awful lot of the swamp has been caught up in the State Department bureaucracy and we’re just going to keep fighting it. And we are going to fight it with the truth.” For his part, Evans thinks that there is a modicum of hope for improved relations with Moscow. “Taylor will have to resign now,” he says. “We might even see a moderation of the uncritical support for Ukraine, as some of the ugly underside starts to emerge, although anti-Russian sentiment is the mother's milk of Congress.”