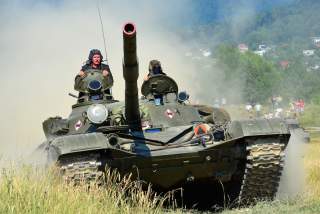 IF RIP VAN WINKLE had gone to sleep in 1992 and awakened in 2017, he might have been astounded by many things, including smart phones and President Donald Trump. He might also have been astonished at how little has changed in the deep structure of world politics since the end of the Cold War.

The NATO alliance still exists, having expanded by incorporating former Warsaw Pact nations to the borders of the Russian core of the Soviet Union. Van Winkle might be surprised to discover that the United States of 2017 is engaged in what would look to him very much like new cold wars with post-Soviet Russia and post-Maoist China. In the first Cold War, many conservatives accused liberals of being Russian stooges or spies; in the new cold war, many liberals charge that President Trump and his supporters are Moscow’s agents of influence. Iran, an American adversary since it became a theocratic regime in 1979, is still considered by many Americans to be the major enemy of the United States in the Middle East. North and South Korea are still divided and in a state of perpetual conflict. If he is interested in a radically different world order, Rip Van Winkle might be tempted to resume his sleep, after setting his alarm for 2050 or 2100.

The degree of inertia in geopolitics should be a particular embarrassment for the realist school of international-relations theory. Conventional realism holds that alliances are temporary responses to external threats and that when the threats disappear, the alliances should be abandoned or transformed. When realists turn from description to prescription, they generally favor one or another variant of an offshore-balancing strategy, with the United States shifting its weight to the least threatening great powers in a multipolar world. (I called a version of this a “concert-balance strategy” in my 2006 book The American Way of Strategy.)

In the long run, realists may turn out to be right. The NATO and U.S.-Japan alliances may wither away; the United States may retrench and adopt a policy of offshore balancing. These developments may simply take more time. It has been only twenty-eight years since the Berlin Wall fell and only twenty-six years since the Soviet Union dissolved.

But those of us who consider ourselves realists must reevaluate whether we are, in fact, realistic. Realists of the offshore- balancing school may be wrong, without it being the case that neoconservative and neoliberal promoters of American global “empire” are correct. There are more than the two options of ever-shifting alliances and American global hegemony or empire. The third option is the division of the world among long-lasting geopolitical blocs.

BLOCS ARE far from unfamiliar. The division of the globe among superpower-led blocs was the central fact of the Cold War from the end of World War II until the 1990s.

The American-led bloc was sometimes called the “Free World.” At best this was a euphemism, at worst an Orwellian distortion of reality. America’s Cold War bloc was not made up exclusively of liberal or democratic countries. It included despotic monarchies in the Persian Gulf and pro-American dictators in South Korea, Taiwan, the Philippines, South Vietnam (before its conquest and absorption by the Communist North in 1975) and most of Latin America.

The Free World was no more the world than it was free. It was challenged by the Communist bloc, whose rulers considered themselves to be part of a single Marxist-Leninist movement, even when, beginning in the 1950s, Mao began to challenge Stalin’s heirs for leadership. The “Third World” was a not a true bloc but a catch-all category, including nonaligned nations like India and many other postcolonial states in Asia, Africa and the Middle East, which sought to maximize their independence from the two superpowers.

The Cold War blocs were less integrated than many premodern empires but much more integrated than old-fashioned arm’s-length alliances among independent states against a common threat. Postwar West Germany and Japan were “semisovereign” states at best, denied truly independent foreign policies and subject to a high degree of informal U.S. domination. They might be described as “protectorates,” at a midpoint in the spectrum between directly governed imperial colonies and truly independent allies.

The Soviet bloc in Eastern Europe was even closer to a traditional empire. In a sphere of influence defined solely in military terms, a great power may insist on having a veto over foreign military alliances on the part of the countries within the sphere, while allowing them to be otherwise independent. This was the situation in Cold War Finland, but it was never the case in the nations of the Warsaw Pact, from the time that Moscow installed subservient Communist satrapies throughout the areas of its post-1945 control until the end of the Cold War. The “Brezhnev Doctrine” asserted the right of the Soviet Union to intervene in the affairs of fraternal Communist- bloc nations. The Soviets suppressed anti-Communist rebellions by invading East Germany in 1953, Hungary in 1956 and Czechoslovakia in 1968. Martial law under the Jaruzelski regime in Poland, beginning in 1981, possibly averted another invasion. With good reason, the subordinate Communist regimes of the Eastern bloc were described as Moscow’s “satellites.”

No Communist government potentially aligned with Moscow ever came to power in any NATO country, so it is not clear what the Western response would have been. However, the United States sought to weaken Communist parties in Western Europe and strengthen their opponents by means of covert action in the immediate postwar period. And in other places, the United States engaged in a series of covert operations to prevent clients from falling, or pro-Soviet or nonaligned leaders from coming to power. The United States covertly helped to topple the Mossadegh government in Iran in 1953, tried to overthrow or assassinate Fidel Castro, encouraged coups in Guatemala in 1954 and Chile in 1973, and invaded the Dominican Republic in 1965 and Grenada in 1983, to name only a few of the many U.S. interventions in the politics of other countries. And the United States fought major wars in the Korean Peninsula and Indochina during the Cold War to keep pro-American, anti-Communist dictatorships in power.

The Cold War blocs were economic and cultural as well as military and ideological entities. The Cold War was, among other things, a war of financial, commercial and industrial attrition by the American bloc against the Communist bloc, employing a variety of stringent economic sanctions over a period of half a century. As part of its Cold War strategy, the United States encouraged the economic integration of Western Europe and turned a blind eye to the mercantilist trade policies of its Japanese, South Korean and Taiwanese protectorates. The Soviet Union had its own Cold War economic bloc, the Council for Mutual Economic Assistance (1949–91), known in the West as COMECON.

The Cold War was also an ideological war. Beginning with the Communist seizure of power in 1917, the Soviet Union sought to manipulate public opinion in the rest of the world, including the United States, by means of local Communist party members, spies and sympathetic but non-Communist “fellow travelers.” In the Cold War, the United States, its allies and protectorates set up their own counter-Communist propaganda networks and institutions. Some, like Radio Free Europe, were public. In other cases, anti-Communist propaganda was secretly encouraged by the U.S. government, which via the CIA, funded the Congress for Cultural Freedom and the magazine Encounter.

In some ways the Cold War blocs were far more integrated than the older European colonial empires or dynastic monarchies had been. To be sure, the dynastic empires had state religions, and colonial empires, at one time or another, claimed to be carriers of a universal idea—counter-Reformation Catholicism in the case of Spain, liberty in the case of Britain, the mission civilisatrice in the case of France. But the combination of hegemonic military alliances, integrated transnational industrial economies and a permanent version of wartime propaganda directed at the masses for half a century was something new in history.

It was also something temporary—or so many realists expected (I was one of them). Once the Berlin Wall crumbled, many of us believed that the Cold War’s alliances and mind-sets, like its institutions, would fade away or be drastically reconfigured. In the “new normal” that followed, nation-states large and small would reconsider old alliances on the basis of cold calculations of their national interests.

This may very well happen. But, so far, it hasn’t. To be sure, the Philippines and Turkey, former close U.S. allies, are flaunting their independence from Washington. But these are the exceptions that prove the rule of the continuing survival of America’s Cold War bloc. In the 1990s, many feared that the newly reunited Germany would rapidly re-emerge as a great power, seeking to create its own Mitteleuropa. Instead, the United States maintained its hegemony within NATO and the alliance expanded eastward until it encountered serious resistance from post-Soviet Russia in Georgia and Ukraine.