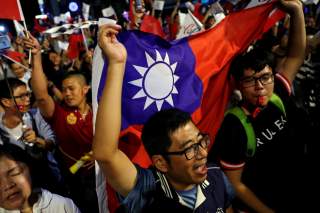 In the recently-held U.S. mid-term elections, there was talk of a “blue wave”: the possibility that the Democrats would overwhelm the Republicans. But it turned out to be a “blue ripple” when the Democrats only won the House by a relatively small margin.

However, in Taiwan’s mid-term elections for city and county magistrates (and other local offices) held on November 24, there was a true “blue wave” when the opposition Kuomintang (KMT, whose color is blue) won rather overwhelmingly against the ruling Democratic Progressive Party (DPP, whose color is green).

In many ways, the Kuomintang reversed the results of the 2014 local elections, when it dropped from fifteen to six city mayor and county magistrate seats: this time, in 2018, it went from six back up to fourteen seats, including major population centers like Sinbei City, Taichung City, and Kaohsiung City.

The KMT was not only able to hold on to Sinbei City, but also captured Taichung (which had been governed by the DPP’s Lin Chia-lung during the past four years), and most importantly Kaohsiung, which had been a DPP stronghold for the past twenty years.

The DPP was only able to keep control of Tainan, Keelung, Hsinchu City, Pingtung County, Chiayi County, and Taoyuan. In Taipei City, the votes were still being counted, with incumbent independent mayor Ko Wen-je having a very slight lead over his KMT challenger Ting Shou-chung.

The election results prompted President Tsai Ing-wen, who concurrently also served as DPP party chairperson, to resign from her DPP chair position. Prime Minister Lai Ching-te also offered his resignation, but President Tsai declined to accept it, so he will for now continue as Prime Minister.

Also on the ballot—or rather on separate ballots—were referenda on a number of different issues, ranging from use of coal plants for energy generation, to same-sex marriage, imports of agricultural products from Fukushima, the name to be used in the 2020 Olympics (“Taiwan” vs. “Chinese Taipei”), and repeal of the Act ending the use of nuclear energy by 2025.

These referenda were made possible by the fact that in December 2017 the Legislative Yuan amended the Referendum Act by lowering the previous threshold (which required that a referendum could only pass of more than 50 percent of eligible voters would vote in favor of the proposed referendum) down to a much more reasonable 25% of the eligible voters.

The two proposals to reduce and eventually phase out coal-firing thermal plants easily passed and met the threshold. Three proposals to maintain current restrictions on same-sex marriage and maintaining the current Civil Code also passed. Maintaining restrictions on agricultural imports from Fukushima passed, but the proposal to use the name “Taiwan” in future sports events, including the Olympics, narrowly failed to meet the 25% threshold.

Two proposals to expand same-sex marriage rights and education were also rejected, while the repeal of the Act ending the use of nuclear energy by 2025 was narrowly accepted, which in theory opens the door for more discussion on the fate of the Nuclear Four powerplant in Kungliao, which was mothballed in 2016.

What are the reasons for this significant shift, and what might be the implications?

The reasons: for the past two years, President Tsai and her DPP government have been caught between a rock and a hard place: on the one side of the political spectrum is the Kuomintang, which disagreed with her on whatever she proposed. The KMT was also on the receiving end of many of the reforms she proposed: it had been in power for too long, and the 2016 election results meant that she needed to implement reforms that curtailed the power and influence of the old KMT.

On the other side of the political spectrum were her “Deep Green” supporters who felt that there was finally an opportunity to move forward on many much-needed changes. These included pension reforms (curtailing the overly-generous pensions enjoyed by civil servants and military), labor reforms (more labor rights), transitional justice (correcting the wrongs of some forty years of “White Terror”), and expanding Taiwan’s international space by pushing harder for Taiwan’s membership in international organizations.

President Tsai, bearing the full burdens of the presidency for all people on the island, felt she needed to move cautiously, and—particularly in cross-Strait relations—stuck to the “status quo.” In domestic issues such as same-sex marriage, she also sounded a cautious note and didn’t move forward as fast as her “Deep Green” supporters would have liked.

Thus she lost considerable support from her core “Deep Green” supporters for not moving far and fast enough on reforms, while the “Blue” Kuomintang opposition was energized in their opposition to her reforms.

One other aspect is of special importance in these elections: Chinese attempts to influence the outcome. According to a statement by Prime Minister William Lai on November 1, 2018, China was engaged in a widespread campaign of disinformation, financial support of certain candidates and sponsoring of television and radio programs, as well as cyber attacks.

Observers in Taiwan say that the Russian attempts to influence the U.S. elections in 2016 pale in comparison to the scale and depth of the Chinese influence operations in Taiwan. One example is the way Beijing influenced the election in Kaohsiung: KMT candidate Han Kuo-yu was a relatively unknown until this Spring: he was an outsider and unfamiliar with Kaohsiung, which has traditionally been a Taiwanese and DPP stronghold. Within a short period, he jumped to the headlines of Beijing’s China Central Television, which gave him continuous positive coverage. This was picked up by the KMT media in Taiwan, leading him to become the front-runner and eventual winner.

For the DPP, the steep loss means that the party will have to do a lot of soul-searching: did it go too fast in its reforms or too slow? How will it counter the newly-reinvigorated Kuomintang and how will it reinvigorate its own “Green” power base?

It remains to be seen how a new and strong Kuomintang at the local levels will translate to the national level. The party is still led by lackluster old-guard members like veteran politician Wu Den-yi, and it hasn’t been able to attract a new generation of young members, who are turned off by the KMT’s worn-out pro-unificationist policies of yesteryear. Will the old-guard be pushed out and make way for a younger generation that is more Taiwan-centered, or will the pro-China orientation continue?

On the domestic front, the DPP will have to throttle back and amend some of its approaches. Energy and environmental pollution are important issues. The DPP is likely to continue the push for renewable energy, and hope that the results will be more visible two years from now. In the meantime, contentious discussions at the local level will continue, and it remains to be seen how the new Kuomintang mayors and county magistrates deal with those issues.

Same-sex marriage is another issue where a slowdown can be expected: the various referenda on the issue show a significant conservatism, and little willingness to move forward with a change of the Civil Code.

The big question is of course how these elections will affect cross-Strait relations. It needs to be emphasized that these were local elections and that even the KMT candidates ran on local issues (“we will make Kaohsiung a great city”) and studiously avoided even mentioning China or its efforts to influence the Taiwan vote.

Beijing will present it as a shift in its direction, but in practice very little will change as national-level policymaking—as well as the Legislative Yuan—are still firmly under the DPP’s control.

Beijing will undoubtedly attempt to drive a wedge between the local KMT-controlled municipalities and the national DPP government by granting favorable treatment to the municipalities from the purchase of agricultural products to sending Chinese tourists groups.

Thus, Taiwan’s “Blue Wave” will intensify the political competition between the DPP and KMT over domestic issues, particularly in the runup to the 2020 presidential and legislative elections. However, concerning Taiwan’s position in the world, we can expect a continuation of the broadly-supported quest for international space and strengthening of Taiwan’s place in the international family of nations.

Gerrit van der Wees is a former Dutch diplomat. Between 1980 and 2016 he served as editor of Taiwan Communique. Currently, he teaches History of Taiwan at George Mason University.