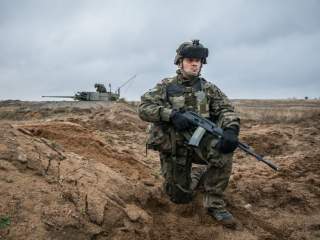 U.S. security policy in North Central Europe is based on deterrence by punishment. As in the rest of its global alliance network, American extended deterrence in this region functions on the premise that the United States will be able to defeat the local challenger through devastating counterattacks. As for U.S. allies in Asia-Pacific and the Persian Gulf, the credibility of guarantees to Poland and the Baltic states has rested on the wide supremacy of U.S. military power—not only its large strategic nuclear arsenal but the “overmatch” that U.S. conventional capabilities have been thought to provide in counterattacking any aggressive move. Even more than in other regions, however, the viability of U.S. security in the Baltic has been based on faith in these abilities as, uniquely among U.S. frontier allies, the United States has not maintained even symbolic troop presences in countries east of Germany. Given the parlous state of the Russian military and the vast superiority of NATO, it has been assumed that this setup, involving retaliation in its most unsubstantiated form, would be sufficient to secure the vulnerable states of this region well into the twenty-first century.

This is no longer a safe assumption. The North Central European security environment has evolved in dramatic and unexpected ways that pose significant challenges for the continued solvency of a punishment-based deterrence. First, the local rival’s military is proving to be better armed and led than we anticipated. Long discounted as backward, the Russian armed forces under Vladimir Putin have undertaken major technical and tactical improvements and incorporated important lessons from the Georgia War. The Kremlin has pursued a multi-year, $700 billion defense modernization program that is bearing substantial fruit in Russian military operations in Syria. Its forces outstrip in size and quality any force between itself and Germany, outnumbering NATO’s CEE militaries, combined, by 3:1 in soldiers and 6:1 in planes. In the Baltic region, it has a 10:1 edge in troops and maintains air dominance over NATO’s northeastern corner.

Meanwhile, the forces that the United States would need to draw upon to correct these imbalances are shrinking. U.S. defense structures have been cut to their lowest levels since before the Second World War. In Europe, they have dropped from 300,000 troops to 60,000. The Obama administration has accelerated this process, removing fifteen bases and the most combat-ready units, including two Brigade Combat Teams (BCTs), two air squadrons and all remaining U.S. heavy armor. These drawdowns mean that CEE will continue to be characterized by unfavorable force ratios for the foreseeable future.

Second, Russia is developing tactics for evading retaliatory deterrence. The limited-war techniques used in eastern Ukraine consist of “jab and grab” land incursions designed to avoid the traditional triggers of NATO’s Article 5. These techniques operate below the threshold of deterrence by punishment and seek to create territorial faits accomplis that lower the costs of revisionism. Russia backs its stealthy battlefield methods with a tactical nuclear arsenal that exceeds that of NATO by a 27:1 margin, deployed under a doctrine of limited strikes for strategic effect. The combination of limited war and escalate-to-deescalate nuclear warfare poses serious problems for deterrence by punishment. It makes aggression less identifiable (and therefore punishable) while wresting away the presumption of escalation dominance upon which effective retaliation is based. In a limited-war setting, punishment quickly morphs into compellence: not just dissuading an enemy, but dislodging him. This shifts the psychological burden of conflict—fear of retaliation—away from Russia and places it on the shoulders of NATO—fear of escalation. It puts the latter in the position of perpetually under-responding to ambiguous provocations (and thereby losing control of strategically vital spaces by default) or over-responding (and risking war).

Doubling Down on Punishment

So far, America’s response to the erosion of its security mechanisms in North Central Europe has been “double down” on deterrence by punishment. The effort to provide strategic reassurance to the Baltic states and Poland through the deployment of U.S. trip wires represents an attempt to strengthen the trigger mechanisms of retaliation. Similarly, the designation at the Wales NATO Summit of faster response forces is, at heart, an effort to improve the West’s capacity for effective retaliation after an attack has already occurred. Such measures are likely to yield some positive results. The problem with both is that Russian techniques have rendered the very premise of effective punishment invalid. “Little green men” can go around the U.S. infantry company meant to serve as a trip wire. Crimea-style tactics can seize territory in minutes and hours, while even the fastest reaction units require days.

While maintaining the edifice of punishment, the time has come for the United States and its allies to add a new component to the logic of U.S. extended deterrence in the Baltic region: denial. Unlike punishment, which threatens to hurt someone after he attacks you or your allies, deterrence by denial seeks to make it physically harder for someone to attack you. Denial operates on the basis of cultivating fear in the mind of an aggressor that he will have to bear a degree of pain that exceeds whatever gains he hoped to achieve by taking the offensive. Historically, great powers have often used denial to protect valuable allies or territory located near a predatory rival. Prior to the nuclear era, denial was a more common way to achieve extended deterrence, since the tools for projecting military force were less reliable. When facing rivals that were stronger on the ground or far away, it was often more effective to impede their expansion in the first place rather than threatening to punish them after the fact.

There are two ways to accomplish denial. The first is to make it harder for an attacker to take territory. This usually involves equipping a targeted state with defensive weapons to increase its odds of delaying or fending off an attack by a superior force. In the seventeenth and eighteenth centuries, France used subsidies, military advisors and units and technology transfers to prop up a line of mid-sized frontier states (Sweden, Poland and Turkey) that impeded the westward military expansion of Russia. The key to this strategy is that a strong patron must provide access to either a level or quantity of defensive properties that the targeted state would otherwise not possess. Such a strategy is particularly effective in the contemporary battlefield environment, as a growing array of inexpensive military technologies favor the defense. Examples of tools that could provide the “quills” to a North Central Europe porcupine strategy include:

1.   Antitank weapons: Large armored deployments like those used by the Russian Army in Ukraine are vulnerable to antitank weapons, which are mobile, concealable and cheap. Notable examples cost between two and two hundred thousand dollars apiece. As shown in Ukraine, the very knowledge that a defender possesses such weapons can slow an enemy advance.

4.   Air defense: A crucial component in denial is the ability to inflict casualties on enemy air attack capabilities. The advanced air and missile defense (AMD) system sought by Poland is an upper-tier example of such a system. Numerous options exist for strengthening lower-tier defenses, including various Man-Portable Air-Defense Systems (MANPADS). Losses of Russian combat aircraft in the Afghan, Chechen and Georgian wars are a testament to their effectiveness.

5.   Flooding and channeling: The flooding of transit routes is an age-old method for reducing an attacker’s mobility. The impact of eastern Ukraine’s waterlogged landscape on 2014 Russian military offensives illustrates how water can amplify the effectiveness of small units against larger forces. Flooding would be relatively easy to implement in parts of the Baltic region and eastern Poland, and would pose significant engineering problems for advancing ground forces, while exposing attempts to bypass or drain flooded areas. Used in tandem with pre-targeted artillery, flooding could channel and bottleneck attacking forces.

6.   Land mines: U.S. allies in North Central Europe are signatories to the 1997 Mine Ban Treaty and 1980 Convention on Certain Conventional Weapons. However, there are important exceptions to these treaties. Antitank mines are effective, low-cost, hard-to-detect counters to superior armored forces such as those favored by the Russians that not regulated by any treaty. Their use can supplement mobile antitank capabilities in channeling attackers into pre-sited areas. Directional antipersonnel mines detonated by an operator are also not banned, and can be grouped to detonate in key defensive areas by a concealed observer.

A second type of denial is to make it harder for an opponent to keep whatever territory he takes. Historically, this “bitter pill” strategy has often been employed by states that are too small to mount an independent defense but possess the willpower to resistance for long periods of time. Since the ultimate goal of revisionist powers is to achieve quick, easy grabs, this strategy seeks the opposite: to show an attacker that any attempted conquests will be prolonged and costly. Sixteenth-century Switzerland is one example of a small state employing a “bitter pill” defensive strategy; twentieth-century Finland is another. Both used scrappy defensive techniques and small but well-trained forces to advertise their indigestibility to potential predators.