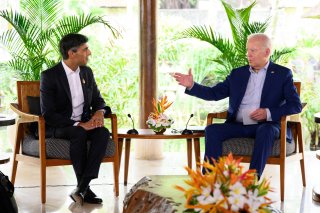 As President Joe Biden completes his Asian trip including the G20 Summit in Indonesia, where he had his first face-to-face meeting with Xi Jinping since taking office, the takeaways seem less than overwhelming.

I would have suggested a more ambitious agenda.

This would include ending the trip with a brief meeting in the Philippines to underscore the importance of this often overlooked alliance, publicly pushing back on China’s power play in the South China Sea, inviting Indonesia to join the Quad grouping, and putting forward a Pacific Charter to support an open, free, peaceful Indo-Pacific region in the twenty-first century.

Let’s briefly discuss each of these in turn.

Balancing Economics and Security in the Philippines

The U.S. approach to Indonesia—a country of 275 million and the world’s third-largest democracy—should be closely coupled with its neighbor, the Republic of the Philippines.

The Washington-Manila alliance has been back and forth since the United State left Subic and Clark in the early 1990s.

One strategic American mistake going back many decades is the imbalance in attention and resources applied to the security partnership over the economic relationship. The Philippines has a gross national product of about $360 billion and a population of 110 million leading to a persistent need for both private trade and investment. According to the Philippines Statistics Authority (PSA), total 2020 bilateral trade with the Philippines in goods was only $22 billion, and trade in services was just $10 billion.

Right now, one of the biggest economic challenges facing industry, especially electronics and semiconductors, is that power is 40 percent more expensive than in Vietnam, while logistics services and labor costs are 10 percent and 25 percent higher, respectively, than the average country in Southeast Asia (ASEAN).

When Intel was in the Philippines from 1974–2009, the company imported about 85 percent of its inputs including integrated circuits and wafers. There is no reason that chip design cannot become a niche industry for the Philippines, with young graduates from the electronics track trained in chip design, layout, and verification.

In terms of foreign direct investment, Singapore was the largest investor in the Philippines, followed by China, South Korea, and then the United States. America’s standing with the government and people of the Philippines would be stronger if we balanced attention on the military and development aid components with more on partnerships in sectors such as technology. This is especially true given that the headquarters of the Asian Development Bank is in Manila.

We need to consistently confront human rights violations, but this should be separated from the 1998 Visiting Forces Agreement (VFA) as well as the 2014 Enhanced Defense Cooperation Agreement (EDCA). The VFA provides legal protections for and facilitates the entry of U.S. forces to the Philippines for training, exercises, and visits in large numbers. EDCA, in turn, allows U.S. forces to upgrade mutually agreed-upon Philippine military bases such as Basa Air Base north of Manila and in the south Puerto Princesa Air Base, in exchange for rotational access for U.S. forces.

Both lead to more effective deterrence, rapid deployment of disaster relief operations, and opportunities for joint counter-terror and training exercises. These also support the U.S. Indo-Pacific Command’s strategy to disperse U.S. forces, including marine and army units, along the first island chain running from Japan through Southeast Asia. Maintaining and expanding these agreements is critical because outside of the Philippines, the nearest U.S. military forces capable of responding to an incident in the Spratly Islands are in Okinawa and Guam, at distances of 1,300 and 1,500 nautical miles, respectively.

Pushing Back Against China in the South China Sea

China seeks to enforce unrecognized boundaries that it has drawn around 85 percent, or 1.4 million square miles, of the South China Sea—almost all of it in international waters, and through which more than three trillion dollars of goods pass each year. China’s claims to the disputed islets and reefs such as the Paracel and Spratly islands have no validity and are incompatible with established international law on maritime boundaries, according to the United Nations Convention on the Law of the Sea, which China has ratified and by which it professes to abide.

Beijing has artificially reclaimed and fortified rocks and reefs with military bases, despite overlapping with claims by Malaysia, the Philippines, Vietnam, and Brunei.

China has named eighty islets and reefs including not only artificial ones but also fifty-five entities that are permanently underwater. To enforce these claims, China has been aggressively using its three navies—the fleets of the People’s Liberation Army, the China Coast Guard, and its maritime militia—to aggressively push back in waters off Indonesia, Malaysia, Vietnam, and the Philippines. Beijing has recently become more provocative by threatening and disrupting major offshore oil and gas projects inside Malaysian and Vietnamese internationally recognized exclusive economic zones, which extend 200 nautical miles off its shores.

This issue could also be highlighted at the November 18–19 Asia-Pacific Economic Cooperation (APEC) Summit in Bangkok. President Biden is not attending which is a mistake since this is the only Asian economic grouping in which Taiwan is a member.

Bring Indonesia into the Quad

The Quad grouping of the United States-Australia-India-Japan promotes stability, security, and prosperity for several reasons. It combines financial firepower, technology supremacy, and a rising consumer middle class. It also has a critical mass with a combined population of 2.2 billion and a GDP of $32 trillion.

This so-called “Quad” grouping has no standing bureaucracy or permanent secretariat. It is certainly not an alliance, since that word is a nonstarter for India. It is an informal but important demonstration of cooperation and partnership. Multiple layers of cooperation reinforce the grouping such as when the U.S. Navy joins the navies of Japan and India for the annual “Malabar” exercises. Furthermore, in September 2021, and much to the fury of France, Australia, the UK, and America agreed to cooperate to supply technology and services to provide Australia with nuclear-propelled submarines.

This spirit of cooperation needs to be expanded on the economics and finance front by inviting Indonesia to join the grouping. Indonesia is a vital American partner in the Indo-Pacific region and US-Indonesia relations are becoming increasingly important in our age of US-China rivalry. China already invests twice as much as America in Indonesia.

Indonesia is the world’s third-largest democracy, the largest Muslim-majority country, the seventh-largest economy by purchasing power, and a leader in ASEAN representing about half of the grouping's annual economic output. Over $5 trillion in cargo and more than 50 percent of the world’s oil tanker traffic passes through the Indian Ocean and the Straits of Malacca into the South China Sea. It is also important to note that India and Indonesia have cultural ties going back thousands of years

Bringing in Indonesia would be a diplomatic masterstroke by tying together four of the five largest democracies of the world: India, the United States, Indonesia, and Japan together with Australia. The challenge is that China, which re-established bilateral ties in 1990 and is Indonesia’s largest trading partner, would pressure Indonesia not to join the grouping.

Still, tensions are escalating between the two countries due to a new Chinese law that for the first time allows its coastguard to fire on foreign vessels and demolish structures built in disputed waters, which took effect in early 2021. The new law also enables them to board and inspect foreign ships. In response, Indonesia is moving its naval combat squad’s headquarters to the Natuna Islands so that it can react faster to any incidents at sea. China claims historical fishing and exploration rights in the exclusive economic zone around the Natuna Islands.

But I would go even further by not limiting the number of countries that could build on the core of what the Quad represents. I suggest a “Pacific Charter” that supports an open, rules-based order, with a shared commitment to international law, self-government, freedom of navigation, and territorial integrity.

As a precedent, on August 14, 1941, the United States and Great Britain signed the Atlantic Charter with the purpose of laying out a positive vision for the post-World War II world.

As we advance in a critical decade of U.S.-China rivalry, it is vital that the economies of the Pacific Rim agree on principles that will support continued progress, prosperity, and peace. With this goal in mind, below is a draft Pacific Charter that could be considered by the twenty-one member economies of the APEC:

We, representing the economies of the Pacific, being met together, deem it right to make known certain common principles in the national policies of their respective countries on which they base their hopes for a prosperous and peaceful Pacific Century.

First, they seek no aggrandizement, territorial or otherwise.

Second, they desire to see no territorial changes that do not accord with the freely expressed wishes of the peoples concerned;

Third, they respect the right of all peoples to choose the form of government under which they will live;

Fourth, they will endeavor, with due respect for their existing obligations, to further the enjoyment by all States, great or small, of access, on equal terms, to the trade and to the raw materials of the world which are needed for their economic prosperity and security;

Fifth, they desire to bring about the fullest collaboration between all nations in the economic field with the object of securing, for all, improved labor standards, economic advancement, and financial security;

Sixth, they agree to a code of conduct and diplomatic process that renounces coercion and without threats or the use of force ensures the peaceful resolution of any territorial disputes in accordance with international law.

Seventh, we commit to freedom of navigation to enable all men to traverse the high seas and oceans without hindrance;

We, the undersigned, unanimously agree to these principles to ensure a peaceful and prosperous Pacific century.