Is Bolton’s War With Iran Becoming A Reality? 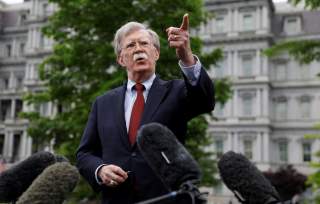 It was the best of times; it was the worst of times. Depending on the day, and depending on who you ask, this is Ambassador John Bolton’s moment of ultimate triumph—or it’s the national security advisor’s moment of final overreach.

Two sources familiar with the matter tell me President Donald Trump’s rumbustious National Security Council chief is headed for the exits, having flown too close to the sun on his regime change efforts for Iran, Venezuela and North Korea. “Hearing that Trump wants him out,” a former senior administration official told me.

But is he? For Bolton, it’s full steam ahead: reportedly commissioning a prospective Pentagon plan for an enormous deployment to the region in the event of an Iranian attack. And for his part, the president has poured cold water on talk of a Bolton ouster.

“He has strong views on things but that's okay. I actually temper John, which is pretty amazing,” Trump told reporters last week, in a nod to his own turbulent reputation. “I'm the one that tempers him. That's okay. I have different sides. I have John Bolton and other people that are a little more dovish than him.”

But the president’s assurances haven’t quelled rampant speculation in the nation’s capital—and other capitals—that there’s now daylight between Trump and Bolton, and that it is the national security advisor who is driving the administration’s global confrontations—particularly, on Iran.

The squabble goes further: a State Department official and a former senior administration official both report that Bolton and Secretary of State Mike Pompeo are “fighting all the time.”

A former senior State Department official still close with Foggy Bottom paints a picture of a Pompeo enthusiastic about isolating the regime in Tehran, but fearful of an actual war that might engulf much of the Middle East.

The situation grows more acute by the day. The United States in recent days has deployed new warships to the Persian Gulf, and Iranian-backed Houthi rebels have been implicated in an attack on Saudi oil tankers. One State Department official told me that though Pompeo is a conservative and a partisan, he’s also been defensive of his department’s turf, and is keen to be reasonably well-liked among career officials. Bolton, by contrast, loathes State: he’s an “arsonist,” this official mused.

With regards to Iran, these perceived cleavages are now being exploited by those outside the administration who seek a course correction: namely, Iran and the architects of the JCPOA.

“We don’t believe that President Trump wants confrontation,” Iranian Foreign Minister Javad Zarif told Face the Nation two weekends ago. “But we know that there are people who are pushing for it. … Ambassador Bolton has said that we need to use the Trump presidency to deal with Iran.”

Coming from the other end, Douglas Macgregor, a Bolton rival and would-be successor, writes in SpectatorUSA: “John Bolton is the problem … Trump’s national security adviser is getting dangerous...particularly to the president’s ideals”

Will such a pressure campaign work? Two things are certain: the president is no fan of usurpations, even perceived, of his authority—and that cuts both ways. But also, so long as Bolton is in government, he'll continue to breathe fire.