Bolton Is Succeeding Where the NeverTrumpers Failed 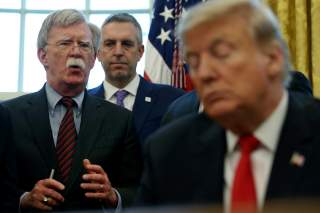 The revelation that former national security adviser John Bolton extensively details his dealings with President Donald Trump on Ukraine in his forthcoming memoir, The Room Where It Happened, is upending the debate over the impeachment trial. Already Sens. Mitt Romney (R-UT) and Susan Collins (R-ME) are indicating that they believe the case for witnesses is becoming increasingly strong. Sen. Angus King (I-ME) says that he anticipates up to ten Republican Senators will vote for hearing from Bolton and others. Just as he was exuding confidence about his impending acquittal, Trump has been wounded, or if you prefer, sabotaged, by his former aide Bolton.

Bolton, a past master at Washington intrigue, has played his cards shrewdly all along. He has managed steadily to build up the anticipation around his $2 million book deal, culminating in yesterday’s bombshell news that he dishes extensively on the actions of Trump and his confederates about the attempt to push Ukraine to provide damaging information about Joe and Hunter Biden. The likelihood that Trump will be convicted by the Senate to convict Trump remains minuscule. But Trump’s strategy—his apparent hope that the Senate would signal its approbation of his behavior and that the trial would be over by the State of the Union on February 4—appears to have failed.

Until now, Trump has largely clung to the pretense that he knew nothing about what was transpiring. For example, when Lev Parnas originally claimed that he had been in contact with Trump and his personal lawyer, Rudy Giuliani, the president alleged that he knew nothing of Parnas. Et voila! Parnas produced a tape of him speaking extensively with Trump at a private dinner at the Trump Hotel in Washington, where Trump can be heard announcing “take her out,” a reference to former ambassador to Ukraine Marie Yovanovitch.

During the impeachment trial itself, Trump’s lawyers have also purveyed a similar defense. They have focused on the mechanics of the Democratic impeachment while regarding it as a supererogatory to explain Trump’s actions. They have acted, in other words, as if a defense were unnecessary. They have asserted but not shown that he was concerned about corruption in Ukraine.

This had the potential to leave Trump vulnerable to attacks in the future as new information about his entanglement in Ukraine emerged. But with the Bolton memoir, Trump’s predicament has accelerated. Bolton, too, alleges that Trump did, in fact, know full well what was taking place. With Trump failing, or refusing, to make a defense of his actions and instead proclaiming that the process is itself is a sham, his allies are themselves scrambling to contain the bad news.

Fred Fleitz, the head of the Center for Security Policy and former aide to Bolton, registered his dismay today in an op-ed for Fox News about Bolton’s memoir. He declared, “Given the importance of protecting a president’s confidential discussions with his senior advisers, I strongly disagree with Bolton’s decision to release the book before the November presidential election and call on him to withdraw it from the publisher immediately.” Once again, this is a complaint about the process. It amounts to saying that because what Bolton is saying is damaging to Trump he shouldn’t say it.

But the horse has already left the barn. The manuscript is circulating and Bolton appears to be intent on testifying before the Senate. In the end, his motivations aren’t as significant as what he has to state about Trump. Whether he is seeking revenge or to pump up book sales doesn’t affect the veracity of what he has to say under oath. An experienced professional and lawyer, Bolton will know how to calibrate his words for maximum effect. Trump may rue the day that, in trying to humiliate Bolton by announcing that he had fired him, he ended up stepping on a rattlesnake. Bolton, who is close to the neocons, if not one himself, was not a NeverTrumper. Trump may be starting to wish that he had been.

Trump himself says that Bolton’s assertions are “false.” But it will take more than allegations of falsity to stop Bolton. Bolton timed his moment in the limelight perfectly. He is exerting, you could say, maximum pressure on Trump. It won’t be easy for Trump to sideline or dismiss his former advisor. In wounding Trump, Bolton is succeeding where the NeverTrumpers failed.