Bonfire of the Conservatives 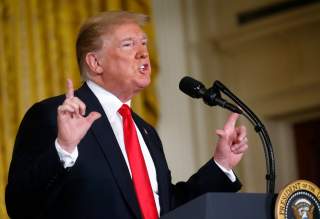 Rather than use a cheerful blaze to burn the modern conservative movement to the ground, right-thinking Americans ought to gather around the fire and clasp hands. Conservatives need an act of unity, embracing what knits together one of the great political movements of modern times.

In “The Conservative Intellectual Movement in America Since 1945,” George Nash rejects a “compact definition of conservatism.”

"American conservatives themselves have no such agreed-upon definition," he argues. "Instead, the very quest for self-definition has been one of the most notable motifs of their thought since World War II." In the post-Reagan era, conservatism has evolved into an alliance of like-minded Americans who share parts of a vision for a free, safe, and prosperous nation.

By bringing together national security hawks, religious evangelicals, and free-market zealots, the American conservative movement became the modern counterweight to the progressive political force that emerged over the course of the 20th century. The battle was on. Advocates of the all-powerful administrative state faced proponents of limited government that would leave individual freedoms unencumbered.

Modern American conservatism is an intellectual rope fashioned by intertwining animating ideas for liberty, the common defense, and free enterprise. That is both its great strength and glaring weakness in the fight against progressivism.

Pundits can argue whether conservative influence is waxing or waning. Nash ended his book on an ambivalent note, saying that, if conservatives were not winning, at the least “gone were the days when Lionel Trillin could assert that liberalism was the ‘sole intellectual tradition’ in the United States.”

In “The Right Nation: Conservative Power in America” (2005), John Micklethwait and Adrian Wooldridge argued more confidently that the right would dominate America far into the future. After Obama’s election that future seemed severely constricted. Even the rise of the Tea Party movement seemed like little more than a false dawn.

Yet conservatives remain a force to be reckoned with. Clearly, Trump could not have won the red states without them. It is not surprising to see Trump champion an issue like immigration and border security; it's a long-standing issue for the right. Broken borders and a flawed immigration system threaten American security, prosperity, culture, and the constitutional rule of law. A sticker emblazoned with the words "Build the Wall" covers a lot of bumpers.

Further, it is hard to see how Trump can govern and move his agenda without conservative support. Win or lose the midterms; the administration will find it much harder to push forward without help from a united conservative movement.

Contemporary debates, however, have the potential to take the movement apart. A stool has three legs—take out one or two legs and, well, you know what happens. And today’s hot-button political debates are framed to pit conservative against conservative.

Prioritizing national security means recognizing that the mantra “peace through strength” doesn’t work if there is no strength. The gap between U.S. military strength as it is and what it should be to deal with current and emerging threats has been growing for a decade. And it continues to grow even though Trump pushed through a brief respite in the decline of defense spending. National security conservatives were will willing to make almost any compromise—even forgoing fully funding the Wall—to make that happen.

A signature issue for social conservatives is eliminating federal funding for Planned Parenthood. Federal support for an organization that does not respect the rights of the unborn undermines traditional cultural norms and clashes with the principle of religious toleration. There are few priorities they would not compromise on to address this grievance.

Among those focused on the economy, nothing is more worrisome than a metastasizing federal government that sucks money out of the economy and redistributes it to favored interest groups. Government spending is corporate cronyism, socialism, and corruption all rolled into one, and the growing national debt is its offspring. For fiscal conservatives, nothing is more important than breaking the chains federal spending is placing on future generations.

Conservatives could well stumble over the stool because one or more leg could fall away—each scrambling to salvage its own priority. Contemporary politics often puts those who should have common cause at each other’s throat.

For example, some conservatives embraced the Budget Control Act in the hope that it would restrain federal spending. They accepted that most of the restraint would fall on defense, but argued that any restraint was better than none, even if much of it was misplaced. National security conservatives didn't buy it, arguing that the budget compromise seriously undermined defense readiness and modernization.

And while Trump presses for more defense spending, the Left insists on increasing non-defense spending (anathema to fiscal hawks) and refuses to accede to any budget that furthers social conservative causes like defunding Planned Parenthood.

Some conservatives argue if that if they can't have it all, it's better to defund all government—just shut it down. That, they say, would be followed by a purge of those that aren't with the conservative agenda.

Some argue that Congress should save one leg and abandon the others. In some instances, it's just that they think their limb is the most important. Others place no value on the other appendages. For example, some conservatives are convinced that current defense spending levels are not only wasteful and unnecessary but even counterproductive.

Other conservatives find traditional family values and social conservatism make them uncomfortable. On social issues, they might even find more common cause with secular progressives.

Still, other conservatives are disgruntled with economic liberalism. They don't see what is wrong with a little protectionism if it protects someone's job.

In short, there are folks on all sides of the stool who act like they live on Survivor Island, happy to be the last conservative standing. This is a recipe for conservative suicide.

Can’t we all just get along?

Some argue it's all just a big misunderstanding—that folks just aren't communicating to other conservatives in a language they understand. National security conservatives, they argue, merely need to explain that strong defense is really just good social and economic policy. Social conservatives have to explain to defense hawks how their policies will benefit military families, retention and cohesion. Economic conservatives have to make the case that Adam Smith's hidden hand has a firm grip on family values.

Alas, the conservative problem isn’t about convincing soccer moms to care about national security. It will take more than marketing to unite compartmentalized conservatives.

It is very difficult to paper over real differences, and it would be a mistake to do so. Disagreements among conservatives are a strength of the movement. Dynamism delivers the diversity and energy that makes the movement genuine.

All conservatives share a vision of free, secure, and prosperous society. Those priorities are equally important; all are worth fighting for, and all have to be accomplished for a healthy society. The only way to achieve all the goals is through hard, honest debate about what the right steps to take are. This is not an advertising problem; it's a dialogue challenge.

The left would like nothing more than to press a national agenda that pits conservatives against each other.

Here is how to keep the movement from unraveling.

Respect. When the founding fathers laid out the priorities of governance in the Constitution, they didn’t list them in order of priority. Providing for the common good, the general welfare and the blessing of liberty were equal in their eyes. They expected the republic to figure out how to do all of them—not discard one when the going gets tough.

That said, each conservative tribe has an obligation to explain to the other how they are supporting the coalition. National security conservatives, for example, ought to make a case they are demanding efficiency and effectiveness in defense spending—e.g., by pushing to get rid of military infrastructure the military doesn’t need.

Conservatives also have a responsibility to listen to each other. Social conservatives, for insistence, can’t skip the panel on free trade at CPAC and make the case that they are really responsible caretakers of the conservative cause. True conservatives are not one-trick ponies.

By all means, conservatives should argue with one another and ask the tough questions, but in charting the path for true conservatism, these discussions should not tear another camp down.

Seek common cause. When the tribes all gather around the bonfire, they will find ways to help one another and identify issues where their interests merge. For example, Heritage defense and education experts worked together to develop recommendations that would simultaneously expand school choice and improve retention of military personnel.

Leave No One Behind. Conservatives have to work together to advance the combined national agenda. Newt Gingrich’s Contract with America nailed it by including social, economic and security objectives. Security and economic conservatives, regardless of what they think is the best way to safeguard the lives of the unborn, ought to agree there is something wrong with the federal government underwriting Planned Parenthood’s blatant political agenda.