Book Excerpt—On the Brink: Trump, Kim, and the Threat of Nuclear War 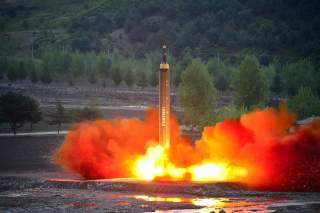 Editor’s Note: The following is an excerpt from the new book On the Brink: Trump, Kim, and the Threat of Nuclear War by Van Jackson. You can purchase the full version here.

Before turning to the evolution of Obama-era strategy toward North Korea, this chapter offers an essential primer on how North Korea thinks about coercion and its nuclear weapons—to the extent that we know—and the kinds of dangers that arise therefrom. Some of what we know about North Korean strategic thinking and its intentions comes from defector testimonies after fleeing to China or South Korea, though we often cannot take their claims at face value. Some of it comes by fiat, from public statements by government officials privy to intelligence reports that the public never gets to see. If enough policymakers say the same thing enough times across enough presidential administrations, then there must be something to it. But much of what we know comes from inferences drawn either deductively, from the structure of the situation, or inductively, from “Pyongyangology,” that is, parsing North Korean words and deeds for hidden meaning. Either approach involves a certain amount of educated guessing. When it comes to claiming anything meaningful about North Korea, therefore, acknowledging a margin of uncertainty is healthy. US officials called on to make choices about Korea are faced with uncertainties and risks at every turn. This has always been the case with North Korea, but nuclear weapons have changed the character of those uncertainties and risks, largely for the worse.

The role of nuclear weapons in North Korean strategic thinking must be distinguished from the motivation that first led them to pursue nuclear weapons. Even recognizing that the foremost purpose of North Korea’s arsenal is for security, we need to understand how North Korea believes nuclear weapons help it achieve security. After all, anything the United States does regarding the threat or use of force should depend on how it expects North Korea to respond, which in turn depends on the strategic beliefs of Kim Jong Un and North Korean military elites. In this chapter, therefore, I take on two tasks. The first is to articulate how North Korea thinks about coercion generally. Whether and how North Korea would use weapons in a crisis or conflict depends to a great extent on its “theory of victory”—a term of art among nuclear scholars that describes beliefs about coercion; how force and the threat of force achieve security goals. Nuclear weapons have to fit within prevailing sensibilities and beliefs that elites share about the relative merits of force. A “theory of victory” tells us what those sensibilities and beliefs are.

Koreans have many proverbs and sayings for which they are famous, but one of the most common, especially in military and security circles, is the rather self-explanatory “I die, you die.” It is the emotional corollary to North Korea’s often used strategy of brinkmanship in threat-making and bargaining; getting what you want by exploiting your willingness to annihilate yourself over principle. It does not mean, however, that North Korean elites or Kim Jong Un are suicidal; they are not. Self-preservation is as important for the Kim regime as it is for anyone. But there are two problems that make North Korean self-preservation manifest differently than for other states.

The first is that the North Korean people have been heavily conditioned over time to expect a future war. As Pak Su-hyon, a North Korean who defected to the South in 1993 and served in Kim Il Sung’s personal security service, told journalist Bradley Martin in 1995, “The problem is, people want war. They believe they are living this hard life because there’s going to be a war . . . They believe they’ll die either way, from hunger or war. So the only solution is war.” The anecdote was offered at a time that North Korea was suffering an extreme famine, but it is indicative of a more general mind-set resolved to the eventuality of war, echoing through time.

That echo was heard even in 2017, when The New Yorker’s Evan Osnos visited North Korea and his host from the Foreign Ministry repeated a version of it: “Three million people have volunteered to join the war if necessary . . . in terms of dignity we are the most powerful in the world. We will die in order to protect that dignity and sovereignty.” Statements like these, as well as much of North Korean history, suggest that the North Koreans would rather accept a war than capitulate—or even be seen as capitulating—to outside pressure on matters that they see as being of existential importance. The practical consequence of this fatalism about a future war at the popular level is that the regime can plausibly lead its people into a conflict without alienating or being deposed by the people. As long as it does not lead to externally imposed regime change, a war could actually play very favorably in the domestic politics of the Kim regime. Thus, whereas political scientists sometimes conceive of popular will as a constraint on the ability of leaders to make war, in North Korea, not only is popular will not a constraint on war, it may actually encourage it under certain circumstances.

The second, more important, problem is that the regime exhibits peculiarly dangerous beliefs about the role of threats and military violence for self-preservation. North Korea under the Kim dynasty has always believed in the imperative of the offense: that clear shows of hostility and resolve (i.e., a willingness to take risks and die) are necessary to deter enemy aggression. It also believes that adversarial reputations matter a great deal: North Korea expects that adversaries will judge its future resolve based partly on what it does in the present moment; small actions of toughness or weakness can therefore have exaggerated consequences in the future. When you combine these twin beliefs (the merits of offense and importance of reputation) suddenly the history of North Korea’s threats and uses of force makes much more sense.

Take, for instance, the private statements of senior North Korean officials to Soviet counterparts in the wake of North Korea’s shooting down of the US EC-121 reconnaissance aircraft on April 15, 1969. The attack, which killed all 31 Americans on board, was the most aggressive North Korea had ever launched against the United States outside the Korean War. Heo Dam, North Korea’s Deputy Foreign Minister, told the Soviet Ambassador to Pyongyang, North Korea is “ready to respond to retaliation with retaliation, and total war with total war,” and that the Americans “did not draw the proper lesson from the Pueblo,” referring to North Korea’s capture of a US naval intelligence vessel and its crew the year prior. Heo implied that the United States should have learned about North Korea’s willingness to take such actions because the seizure of the Pueblo demonstrated it. In effect, North Korea was using violence to socialize the United States to expect certain consequences under certain conditions. Soviet Ambassador Sudarikov followed this conversation with a similarly toned exchange with North Korea’s Foreign Minister Pak Seong- Cheol. Pak told Sudarikov:

If the Americans had decided to fight then [when the EC-121 was shot down], we would have fought . . . we wage firefights with the Americans in the area of the 38th parallel almost every day. When they shoot, we also shoot . . . But no special aggravation arises from this . . . we’ve also shot down American planes before, and similar incidents are possible in the future . . . It’s good for them to know that we won’t sit with folded arms . . . If we sit with folded arms when a violator intrudes into our spaces, two planes will appear tomorrow, then four, five, etc. This would lead to an increase of the danger of war. But if a firm rebuff is given, then this will diminish the danger of an outbreak of war. When the Americans understand that there is a weak enemy before them they will start a war right away. If, however, they see that there is a strong partner before them, this delays the beginning of a war.

Notably, these words were shared in private with a Soviet patron who was trying to understand why North Korea would provoke the United States with violence and warning of the danger of doing so. This makes them more credible and more revealing than public statements intended to influence the United States. They also illustrate North Korea’s offensive, reputational beliefs about the efficacy of coercion. When Pak states that “if we sit with folded arms . . . this would lead to an increase of the danger of war. But if a firm rebuff is given, then this will diminish the danger of an outbreak of war,” he is articulating the core theory of North Korean coercion: North Korea believes going on the offensive prevents the United States from invading. In other words, showing strength and resolve prevents war, while showing weakness invites war. Pak’s justification of recurring friction along the DMZ conveys similar thinking: to North Korea, the accumulation of sporadic small-scale clashes with the enemy actually prevents war because it ensures that the enemy will judge North Korea as having firm resolve in the future. Small acts of aggression have exaggerated payoffs.