Book Review: 'Brothers Armed—Military Aspects of the Crisis in Ukraine' 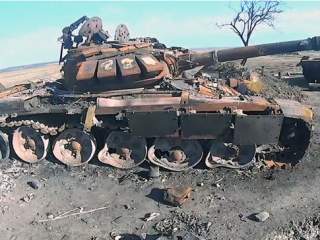 The Obama administration’s and Europe’s approach to the Ukraine crisis has been comprehensively examined in the Western media. But the Russian perspective has not received as much attention. A valuable new book, Brothers Armed: Military Aspects of the Crisis in Ukraine, which is edited by Colby Howard and Ruslan Pukhov at the Moscow-based Center for Analysis of Strategies and Technologies, helps to fill that gap. It provides a superbly detailed overview of the conflict from leading Russian experts about the Ukraine imbroglio.

It begins with an overview by Vasiliy Kashin, of Soviet leader Nikita Khrushchev’s transfer in 1954 of Crimea from what was then the Russian Federation of Soviet Socialist Republics to the Ukrainian Soviet Socialist Republic. Much of the chapter is spent questioning the legality of the Khrushchev’s decision. Kashin observes, “The question of whether the transfer of Crimea to Ukraine broke any of the Soviet Union’s own laws is . . . a subject of much debate. Let us note, however, that in May 1992, the Supreme Council of the RSFSR gave its own answer to that question by declaring the 1954 decree that made the Crimea part of Ukraine null and void.” He adds, “the transfer of Crimea to Ukraine was met with considerable skepticism among the general public even during the Soviet period.”

The book also describes—in copious detail—the forces that an independent Ukraine inherited from the Soviet Union after it collapsed. Almost every unit is described down to the composition of individual divisions and brigades. These descriptions include the number and types and subtypes of tanks, vehicles and artillery pieces for each unit. Air force and naval units are also minutely analyzed. Another chapter describes the post-Soviet decline of the Ukrainian military. According to Sergey Denisentsev, “It is hard to find any other example in human history of such a strong and capable army of a large state deteriorating so rapidly—and during peacetime no less—and to the extent that it now hardly qualifies as a cohesive armed forces [sic].”

The decline of the Russian forces in the aftermath of the Soviet collapse received a good deal of attention. Mikhail Barabanov, who is editor-in-chief of the Moscow Defense Brief, deftly describes the Soviet military system, which was designed to gear up to fight World War III, and the various attempts at reform. Barabanov also does an excellent job of discussing the 2008 Georgian campaign—which was a catalyst for Russian president Vladimir Putin’s insistence on the radical reform of the Russian military. A subsequent chapter titled “Little, Green and Polite” by Alexey Nikolsky describes the creation of Russia’s modern Special Operations Forces (SOF)—which have performed quite successfully in Ukraine. In contrast to GRU Spetsnaz forces whose specialty is deep reconnaissance, he writes, “the focus of SOF is closer to direct action.”

The second half of the book devotes much attention to Russia’s annexation of Crimea. Several authors suggest that Russia’s military reforms since 2008 have been very successful. But Anton Lavrov notes that while Russian forces performed well, reforms are incomplete. According to him, “units involved in the Crimean operation . . . were able to commit only part of their strength; understaffing remains a problem across the Russian Armed Forces. Another problem is the cyclical nature of the Russian conscription system; for much of the time, many units largely consist of untrained conscripts who have only just been drafted.” Barabanov reviews the performance of Ukraine’s forces during the conflict. He suggests that the conflict has reached an impasse in which the “cost-to-benefit ratio seems especially poor for Moscow, since the benefit is in fact nonexistent.”

Overall, the book provides a most impressive overview of both the Russian and Ukrainian militaries. Since Brothers Armed is written from the Russian perspective, Western readers—and especially Ukrainians—may not share its viewpoint or necessarily agree with the arguments put forth in the book. But at the most fundamental level, this work is certainly a treasure trove of information about Russian military forces and the Ukraine conflict. It should be closely read and studied by anyone interested in the crisis in Ukraine.