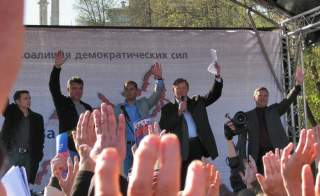 De mortuis nil nisi bonum —let nothing but good be said of the dead— is certainly an appropriate admonition when reflecting on Boris Nemtsov’s life. His meteoric rise to power under the direct patronage of Boris Yeltsin, and his subsequent fall from grace, will no doubt be prominent themes in his obituaries. But what many observers are now probably wondering is what impact his death is going to have on the liberal wing of Russia’s political opposition. Will his death serve to unite them, or will it simply be remembered as just another tragic date in an already long list?

The answer may lie in his political legacy. By all accounts, Boris Nemtsov had difficulty sharing the political spotlight. His ambitions, fueled no doubt by his premature anointment as Yeltsin’s potential successor, led to frequent clashes for political supremacy within a very small, but fiercely self-centered liberal Russian elite.

In one of his very last interviews he said his attitude toward Putin “could not be worse.” This led him to harsh and often uncharitable criticisms of his former liberal political allies who chose to work with the Putin, rather than have no political influence whatsoever. He steadfastly preferred the more principled position, as he saw it, of totally rejecting any dealings with the present political system or dialogue with those in power. Because of this, he was an early and strong advocate of Western economic sanctions and black lists on specific Russian officials, among whom he considered the first deputy head of the presidential administration, Vladislav Surkov, to be one of the most odious.

But his principled stance had a price. In a 2011 survey of twenty-three Russian political experts, a lack of fresh faces, ideas, or practical programs aimed at helping ordinary citizens were cited as the primary reasons for the perennial failure of Russian liberalism. Along with Anatoly Chubais and Egor Gaidar, Nemtsov was named as one of those most directly responsible for discrediting liberal discourse in Russia, Unlike Chubais and Gaidar, however, Nemtsov was not regarded as being an intellectual driving force for liberalism, but rather a pure politician. For a person of such staunch principles, it must of been particularly galling to be regarded as a mere politician.

It is thus likely that Boris Nemtsov’s tragic death will have little lasting impact on Russian politics. To be sure, it will reinforce the narrative of Putin’s authoritarianism in the West, but that can hardly be made any worse. Within Russia itself, while there will be many that will view him as a martyr, others will regards him as an exceptionally gifted politician, who in the end could not, or would not, compromise on his principles.

Nicolai N. Petro is professor of politics at the University of Rhode Island. He has recently returned from a year-long Fulbright research scholarship in Ukraine.