Brazil's Bolsonaro Is Blind to His Political Problems 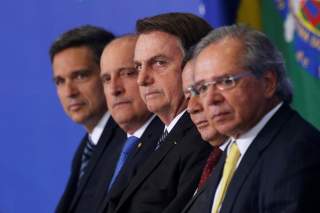 President Jair Bolsonaro’s first months in office have been marked by frustration because he refuses to horse trade in the murky party system of the Brazilian Congress. Although critics blame his inexperience and naïveté, for his part, Bolsonaro claims that Brazil must adjust to his distinct governing style.

However, the impulsive and pugnacious style that swept him to electoral victory now threatens his ability to govern. Rather than identifying a new and productive way to govern for all Brazilians, Bolsonaro is busy placating his base and taunting his leftist critics. Instead of setting himself up for wins, he continues tilting at windmills.

No doubt, the depth of change Bolsonaro promised to voters entails some turbulence. Yet, his compulsion to demonize opponents—either as communists or as captives to gender ideology and so-called “cultural Marxism”—complicates his ability to explain complex issues in a way that might rally support for critical reforms. Bolsonaro’s pandering to his base does much more to exacerbate infighting within his administration than any Brazilian “deep state” working to frustrate his ambitions. By constantly playing to his die-hard supporters, anti-globalists, and conspiracy theorists, Bolsonaro undercuts the impressive cabinet he has assembled.

Scandal and upheaval in his inner circle have yet to convince Bolsonaro to change course. First, his son, Sen. Flávio Bolsonaro, became embroiled in a potential money laundering scandal. Then his party’s leader resigned for funneling public money to political candidates that existed only on paper. Most recently, Bolsonaro faces calls to explain his connections to the former police officers suspected of assassinating popular Rio de Janeiro city councilwoman, Marielle Franco, last year.

Through it all, Bolsonaro has insisted that he is untouched by the notorious corruption of his enemies. He appears oblivious to the fact that his brand as an incorruptible politician, so much a part of his public persona, is seriously at risk.

Over the last five years, the Lava Jato investigation has highlighted the desperate need to reform campaign finance, lobbying, and electoral rules that contribute to congressional fragmentation and labyrinthine political coalitions. Bolsonaro should take heed—while he has failed to deliver such reforms, his Minister of Justice and Public Security, the famous judge who previously led the investigation, Sérgio Moro, is now the most popular public figure in the government by far.

It is difficult to exaggerate how ill-suited Bolsonaro’s temperament is for rallying support for the long-term, painful reforms that Brazil requires to accelerate its sclerotic economy. Bolsonaro’s goal to lift Brazil into the top fifty of the World Bank’s Ease of Doing Business Index—from its current position at 109th out of 190—is extraordinarily ambitious. (Only India, its BRICS peer, has registered a similar improvement within a four-year window). Reforming pensions is an urgent priority, because they account for 50 percent of Brazil’s federal budget. Radical changes are the only hope to defuse a fiscal time bomb in Latin America’s largest economy.

Yet, Bolsonaro’s pension reform legislation is off to a sputtering start. Before passing out of committee, routine congressional hearings, meant to provide Economy Minister Paulo Guedes a platform to defend Bolsonaro’s proposal, were interrupted when a Workers Party lawmaker used derogatory Rio slang to describe the minister behaving as a promiscuous girl with bankers and elites, but as a roaring tiger with pensioners and the poor. Guedes had to be escorted out by security personnel to avoid fisticuffs with opposition legislators. Rather than working to calm legislative tensions, Bolsonaro poured kerosene on the fire.

Nevertheless, the evangelical community, which forms the backbone of Bolsonaro’s support and in whose direction much of his pandering is aimed, has shown signs of abandoning him. After receiving approximately 70 percent of Evangelical voters during the campaign, recent polls reveal Evangelical support for Bolsonaro slipping to 40 percent. This figure should grab Bolsonaro’s attention—even with his most fervent base of support, he is polling lower than overall support for previous President Luiz Inácio “Lula” da Silva and President Dilma Rousseff at the same point in their tenures.

Any bump Bolsonaro may have received from his highly fruitful trip to the United States, where he advanced his top foreign-policy goal of realigning Brazil with the United States for the first time in decades, failed to register because of a return to squabbles in Brasília. Embarrassing gaffes, such as repeating his foreign minister’s claim that Nazism was a leftist movement and stating that the Holocaust is a “forgivable” offense, threaten his other foreign-policy objectives, as well as a budding relationship with Israeli prime minister Benjamin Netanyahu, who recently sent Israeli troops to Brazil to bolster a rescue team after an environmental disaster. And the return of culture wars, including revision of history textbooks, education cuts, and a policy aimed at the “ideological predators” otherwise known as teachers, by filming them in their classrooms, threatens his political capital on the domestic level.

While it is too early to declare Bolsonaro’s mandate mortally wounded, the stakes could not be higher and his presidency is at a critical juncture. The good news for Bolsonaro is that his opposition remains divided, still reeling from its historic defeat last year and focused myopically on internal issues like challenging Lula’s incarceration. Still, absent some sort of pension reform, Brazil’s economy will lurch back into recession, squandering any benefits accruing from Brazil’s new free-trade posture or U.S.-backed OECD membership. Achieving even modest pension relief may well initiate a virtuous cycle of growth and reform on other fronts.

Bolsonaro’s election represented a monumental opportunity to purge the corruption and economic mismanagement that has nearly wrecked the country. The old way of governing Brazil left a sorry legacy. Look no further than the country’s three most recent presidents, ensnared in Brazil’s anti-corruption probe: one sits in federal prison for bribery, one was impeached, and the most recent awaits trial. However, in a nation desperate for change and eager to embrace a new governing style, Bolsonaro has yet to reassure voters that he can set aside his pugilism and ideological obsessions long enough to solve Brazil’s very serious problems.

Ryan Berg is a research fellow at the American Enterprise Institute, where he focuses on crime and narco trafficking in Latin America.