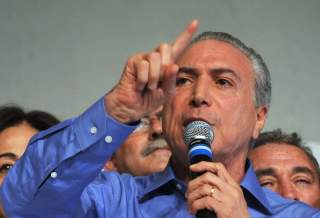 Over the last several years, Brazil has gone through political and legal turmoil that has polarized the public into warring camps, revived forgotten fears of a latter-day military coup, and reignited racial and economic discourse in a way not experienced for an extended period of time.

Despite the overwhelming support enjoyed by the pro-impeachment campaign, the process itself proved to be slow and painful—and can be viewed as a traumatic event for Brazil’s institutions and society as a whole. The country now finds itself wounded and facing the same problems as before—only now there is no prominent figure like Rousseff to absorb the public’s blame and anger.

The new government led by President Michel Temer—Rousseff’s former deputy—has minimal room for error or even to adapt. The public’s expectations are high, and the government is expected to provide impossibly immediate solutions to Brazil’s deep problems.

The Temer government’s first challenge will be to restore investors’ trust and confidence in Brazil’s economy. Temer’s appointments of Henrique Meirelles as Minister of Finance and Ilan Goldfajn as President of the Central Bank are indeed a step in the right direction, and have been welcomed among Brazilian and foreign investors alike.

The GDP figures, however, only provide a partial picture of the depth and magnitude of the current crisis. Recently released data shows that unemployment has risen faster than previously thought, with more than 11.1 million (10.9 percent of the workforce) now looking for jobs. This figure represents a quarter-on-quarter increase of nearly two percent. If that wasn’t enough, inflation is on the rise—going from 9.34 percent in mid-April to 9.5 percent in mid-May.

Adding to these concerns is the recent statement made by Minister Meirelles that Brazil’s fiscal deficit prior to debt interest payments could reach $42.1 billion this year. Many fear this will grow further, as the economy is not showing any signs of near-term recovery.

Facing a worsening economic situation, investors are looking at the Temer government to ride the current wave of public support to swiftly execute necessary but painful reforms. Many investors consider the upcoming ninety days to be a crucial time period during which the new government needs to issue and execute economic reforms to cut the growing budget deficit and rising debt—a task the Rousseff government was neither willing nor able to tackle.

A partial view of the new government’s plans reveals the importance of using the presently existing momentum to tackle public spending, which is consuming about 35 percent of GDP. The new government has already announced plans to cut four thousand public-sector jobs, and Meirelles has made announcements regarding much-needed public pension reforms—starting with a minimum retirement age of sixty-five.

Another step the government is seeking to take is the privatization of state-owned enterprises such as hydroelectric dams, airports, marine ports, insurance companies and the postal services. In a recent simulation conducted by Wikistrat, it was agreed that such a plan is likely to encounter strong objection from local workers’ unions, despite high hopes from government officials. Leading to strikes and protests as have happened in the past.

In addition, Wikistrat analysts argued that low-income Brazilians—the main beneficiaries of Workers’ Party policies over the past sixteen years and who are the main consumers of many public services and plans—are likely to object as well, increasing the pressure on the government to abandon massive reforms in favor of minor ones.

To conclude, Rousseff’s impeachment might have brought a wave of optimism to Brazil’s business sector, but it has not solved any of the problems the country is currently facing. The next ninety days are crucial in this regard, and will signal whether the new government is capable of executing much-needed public reforms and austerity measures to pull the country out of its downward spiral or again enter a political storm.

Oren Kesler is Research and Projects Team Leader at Wikistrat.