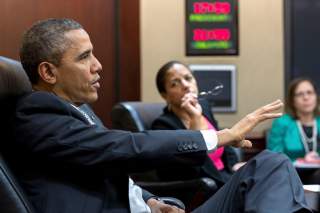 Listening to President Barack Obama announce the imposition of new sanctions against Russian companies and entities, I winced when I heard the line, "These sanctions are significant, but they are also targeted—designed to have the maximum impact on Russia while limiting any spillover effects on American companies or those of our allies." I had an image of the classic trope of the angel and devil sitting on the opposite shoulders of the Chief Executive, whispering into his ear as he spoke, except the two figures were replaced by Fred Hiatt of the Washington Post, urging stronger, more punitive, unilateral action in defense of freedom and U.S. values against the tyrant Putin, on the one hand, and Rex Tillerson, the CEO of Exxon Mobil, warning of dire consequences to the U.S. and global economy and of the damage American companies might suffer as a result—with a corresponding loss of jobs just months before a critical midterm election.

The measures that have been enacted are much tougher than previous iterations that focused on targeting individuals; they freeze any U.S. assets of a number of major Russian defense contractors and bar major Russian energy firms from being able to access U.S. credit markets for anything more than short financing. While Russian companies publicly tout their ability to obtain capital from other sources—starting with China—there is no doubt that the cut-off of longer-term dollar financing for major energy firms like Rosneft and Novatek will have a negative impact on their operations. (Curiously, while Gazprombank is sanctioned, Gazprom is not—a seemingly backhanded recognition that messing around with one of the critical sources of Europe's natural gas might not be welcomed across the Atlantic. Most of Novatek's gas production is destined either for the Russian domestic market or for China, given that it now has the right to export liquefied natural gas (LNG).)

But we should not overemphasize their importance. They are more than an annoyance, but far from catastrophic. They will create problems for the Russian economy, but they are insufficient in scope and impact to alter the Kremlin's calculus on Ukraine's importance to its strategic plans, as I detailed in a longer piece for this magazine.

And I wish that the president had avoided the language I quoted above. Whether intended or not, it fits into a broader narrative about his administration's search for what Ray Takeyh and I characterized as "a low-cost, no consequence" approach to intervention. The language chosen—and the sanctions measures announced—convey the unspoken message that the United States is willing to go only so far to pressure Russia over Ukraine—and that once significant U.S. equities are threatened, the limit has been reached. For the most part, the new sanctions do not interrupt "business as usual" between major Russian and American companies. Boeing will continue to buy titanium and sell planes; Exxon Mobil is on track both to start up the exploitation of the Russian Arctic and to construct an LNG facility in the Far East within the parameters of its partnership with Rosneft. U.S. firms will find ways to comply with the letter of the law while keeping their options open. This sends the signal that the administration—and by extension, the larger U.S. foreign-policy community—has not settled the fundamental question as to whether the fate of Ukraine is a preference or a strategic necessity. If ensuring that Ukraine's westward orientation and its territorial integrity are both preserved is a vital U.S. interest, then the United States has to be prepared to risk its own economic well-being by bringing stronger pressure to bear on Moscow. This includes the possibility of losing business to Asian firms (or even European companies if the EU as a whole declines to follow with the same set of stricter sanctions). So far, what we've seen is the business equivalent of a drone strike—pinprick measures which offer no risk to the operator, but which also have limited utility in shaping the overall environment.

Moscow is not pleased by the latest move and the rhetoric has been harsh, but we've seen a calculating approach from the Putin administration—not reacting emotionally but shoring up commercial ties with U.S. firms by not taking tit-for-tat measures. Moreover, with Europe, so far, only taking a more cautious approach to the expansion of sanctions, the Kremlin may feel it can wait matters out until the situation in Ukraine has become so dysfunctional that the West is more open to making a deal. Europe is also not going to want to impose much stronger sanctions on the Russian energy sector until there is a substantive breakthrough in the Iran nuclear talks; it makes no sense to further limit global energy supplies by having two major hydrocarbon producers become "off-limits" to Western investment and development. Over the next several weeks, the Obama administration will have to wrestle with the politically unpleasant trade-offs this would entail.

If Washington wants to get the Kremlin's attention, then it has to be prepared to lower the boom—forbidding U.S. and U.S-based oil service firms like Halliburton and Schlumberger from operating in Russia or for Exxon to be banned from transferring the technologies needed to work in the offshore zones of the Russian Arctic—knowing that there would be significant Russian retaliation. It would also have to do much more in terms of aiding Ukraine. It's a commitment that, so far, the United States does not want to undertake.

Vladimir Putin has made it clear he is prepared to risk much over Ukraine. Are we willing to do the same? So far, the answer remains ambiguous—and the latest announcement does not do much to clear the air.

Nikolas K. Gvosdev is a professor of national-security studies at the U.S. Naval War College and a contributing editor at The National Interest.