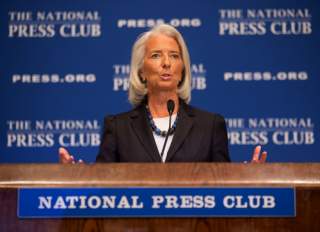 When politicos and pundits wander off onto some half-baked historical analogy, it more often than not will have to do with comparing this or that current event to (if bad) Munich or (if very bad) 9/11. If the event is praiseworthy, it is likely be compared to the fall of the Berlin Wall or VE Day. When a politician as peripatetic as Mrs. Clinton does it, as when she compared Vladimir Putin to Adolph Hitler last March, one could reasonably enough chalk it up to fatigue. It is quite another thing, however, when a newspaper columnist does it and, what’s more, knows he’s doing it and tells us he’s doing it.

Such was the case on Tuesday, when the New York Times’ Thomas Friedman checked in from Davos to inform readers that even though he considered Mrs. Clinton’s Putin-Hitler gaffe “over the top,” now he doesn’t: “I don't think so anymore. I’d endorse Mrs. Clinton’s comparison purely for the shock value.”

The situation in Ukraine is so dire that it merits embracing a falsehood in order to make people aware of “the awful things Putin is doing to Ukraine.” After all, Ukraine (unlike, presumably, Russia) “shares our values.” Perhaps. Friedman himself holds a curious set of values, or, to put it more precisely, beliefs. These consist of the neoliberal economic orthodoxy that Mr. Friedman has been advocating for the better part of two decades in books such as The Lexus and the Olive Tree (1999) and The World is Flat (2005). Throughout, Friedman has championed the idea that free-trade and the attendant effects of “globalization” will bring peace and prosperity to mankind.

This is, of course, provided that mankind can emerge sufficiently intact from what always follows the IMF mandated “reforms” of which Friedman is so fond: excruciating periods of artificially high unemployment; onerous rates of personal taxation, indebtedness, impoverishment; the hollowing out of the manufacturing sector; crippling cuts on the public-sector; to say nothing of higher rates of suicide and infant mortality—among other niceties.

Why, just ask George Soros, who according to Friedman, has “been helping foster Ukrainian reform” of late. At Davos, Soros told the assembled potentates—tinpot and otherwise—that “there is a new Ukraine that is determined to be different from the old Ukraine. ... What makes it unique is that it is not only willing to fight but engage in executing a set of radical reforms.”

What is the theory behind these “reforms?” I put the question to University of Missouri at Kansas City economist Michael Hudson who responded that:

The “new economic thinking” of neoliberalism holds that privatization of public infrastructure can make investors rich. Creditors will lend and get secure collateral, and equity investors will become rent extractors limited only by their inability to dismantle government regulations against windfall gains, a rent-tax, “unexplained earnings” taxes and other rentier income.

When rent extraction impoverishes the economy, the financial solution is for the IMF or other intergovernmental organization to lend governments enough foreign exchange to pay their foreign creditors—and make taxpayers pay the cost of the tax shift off finance and real estate and monopoly onto labor. The result is economic shrinkage.

And sometimes, the result is catastrophe, as with what occurred in Russia in the mid-1990s or massive political instability, as with what happened in Argentina between 1998-2002.

Hudson also notes that Mr. Soros has a rather long and uninspiring track record in Eastern Europe:

Since 1990, Mr. Soros has funded policy lobbying tanks in the Baltics and other post-Soviet states. These have become failed economies, their population shrinking and their real estate untaxed while labor bears a much higher share of the fiscal burden than in the United States. One can only assume that financial plans for Ukraine endorse the Eurozone’s and IMF’s demand for austerity and continued emigration, economic shrinkage and forced selloffs of public property…

Mr. Friedman—along with Mr. Soros—may really believe that it is Russia that poses the greatest threat to Ukraine’s economy, but if history is anything to go by, the government in Kiev may want to think twice before becoming beholden to the IMF’s ministrations.

James Carden served as an advisor to the US-Russia Bilateral Presidential Commission at the State Department from 2011-2012.