Is Brexit a Chance to Heal Europe's Wounds? 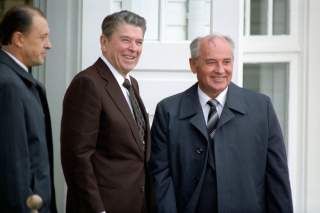 Three months before he became the General Secretary of the Soviet Communist Party, Mikhail Gorbachev visited Great Britain. Speaking to Members of Parliament on December 18, 1984, Gorbachev announced the concept that would later define his approach to Europe and to the post–Cold War world that he helped inaugurate. “Europe,” he said, “is our common home. A home, and not a ‘theater of military operations.’”

Gorbachev was ahead of his peers. Europe was in the grip of fear. After 1979 rhetoric escalated across the divided continent: the Soviet invasion of Afghanistan, martial law in Poland and rattling of nuclear missiles on both sides of the Iron Curtain comprised a grim political climate. Gorbachev’s reminder of the civilizational unity of Europe—“Europe from the Atlantic to the Urals,” as Charles de Gaulle once described it—cut right through the divisions: the East versus the West, the Warsaw Pact versus NATO and socialism versus capitalism. For Gorbachev, Europe was not just the most important partner of a reformed Soviet Union; it was a destination.

The closest Gorbachev came to realizing his vision was in 1989, when the Berlin Wall came down. Germany was reunified. Post–Cold War Europe, it seemed, would have a clean start; it would be more inclusive, open and spacious.

This is not what happened, though. Far from being dismantled like its rival Warsaw Pact, NATO struggled on, unsure of its mission, wandering aimlessly from ethnic conflicts in the Balkans to a dialogue with Russia in the partnership for peace, but ultimately finding solace in the open-ended extension to the East. In the meantime, on February 7, 1992 members of the European Community signed the Maastricht Treaty, paving way for the creation of the European Union, a home within a home, a posh penthouse in the dilapidated building of post–Cold War Europe.

The Russians were too busy to take notice. Just over a month before Maastricht, Gorbachev stood down as President of the USSR. The Soviet Union itself was no more, crumbling in a spectacular parade of sovereignties. New Russia faced economic chaos, poverty, unemployment, and disillusionment. President Boris Yeltsin looked to the West, but not for long. In the mid-1990s, Russia became more nationalistic and inward-looking. The Russians felt excluded from the unfolding processes of European integration. They found themselves on the margins of Europe, like unwanted orphans at an expensive wedding. They were feared a little, despised a little, but on the whole shoved out of sight.

The European Union expanded, incorporating former Soviet satellites in Central and Eastern Europe. This was peddled of course as the triumph of the European idea. Not for Russia. From Russia’s perspective, all it meant was that the Berlin Wall was moved ever further to the East: it made old Europe more divided and more polarized, and—the closer the EU moved to Russia’s borders—more critical of Moscow. This certainly was not what Gorbachev had in mind.

In the end, rapid ideologically driven expansion did three things. First, it deepened the gulf between Russia and Europe, creating fault lines that currently run through the steppes of Eastern Ukraine. Second, it fed fears and insecurities among the more prosperous member states, leading directly to Brexit. Third, as the EU became bigger, it also became more bureaucratic and more remote. It acquired a personality of its own: incomprehensible, and so assumed to be hostile, whether in making laws for Britain or in imposing sanctions on Russia.

When the dust settles, the European project will struggle on. But the UK referendum has given us a chance to consider how far Europe has come, and where it is heading. The opportunity of 1989 was unfortunately squandered. It certainly wasn’t Brussels’ fault—it was much more complicated than that. But the ensuing quarter of a century deepened the European division. No one is talking about a common European home anymore, and even Gorbachev has grown bitter and more nationalistic, endorsing, for instance, Putin’s annexation of Crimea.

Some have said that Brexit is a victory for Putin, a victory for xenophobia and nationalism, a relapse of the 1930s. Maybe. But from the perspective of those left on the margins of the European project, Brexit is an opportunity to go back to the drawing board, and to ponder Europe’s remaining divisions. It is a setback that goes to the very heart of the question about the European identity. In 1984, the idea of Europe without Russia would have struck Gorbachev as about as absurd as Europe without Great Britain. Now, both are outside: one because it is not wanted, the other is because it does not want to be part of the EU. Their absence is a reminder of all the wrong turns made on the road to European unity, and, perhaps, an invitation to do a better job in the years to come.

Sergey Radchenko is Professor of International Relations at Cardiff University, UK, and Global Fellow at the Woodrow Wilson Center for International Scholars.