Brexit Creates a Game of Risk for European Banks 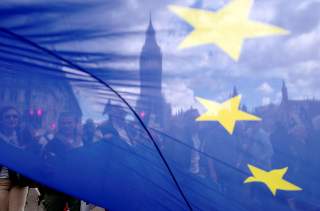 While the government of Theresa May seeks to restart negotiations with the European Union on December 5, time is marching on. This is important as risk managers are looking at their watches and are increasingly concerned about London’s inability to come forward with a credible Brexit bill in the eyes of Europeans. The result could be a hard Brexit, with a “cliff edge,” in which the United Kingdom and European Union part company with no agreement concerning trade, finance and movement of people in place. A major Achilles’ heel in this scenario could be finance—all of those intricate linkages that tie the United Kingdom and European banks, asset managers and pension funds together, ranging from cross-border lending, asset management, derivatives, compliance issues and back-office operations.

While much of the media’s coverage has focused on the weaknesses of May’s cabinet, divisions within the Conservative Party and talk for yet another general election has the financial world scrambling to deal with a potential hard Brexit. Most financial professionals do not favor Brexit as it jeopardizes London’s role as a leading international financial center and complicates their business arrangements with Europe. A hard Brexit represents a potential shock to the international financial system and has both direct and indirect consequences for the United Kingdom’s economy.

The Brexit effect is already evident in how slowly some international banks are moving personnel and operations out of London. British corporations are also starting to spend more cautiously. Additionally, forecasts for economic growth are grim. According to the International Monetary Fund’s October 2017 global economic outlook, the United Kingdom’s economy has steadily cooled from relatively strong economic growth to a subpar 1.8 percent in 2016, with the estimate for 2017 at 1.7 percent and a forecast of 1.5 percent in 2018.

While slower economic growth is a problem, the bigger challenge is what happens in the financial sector and not just for the United Kingdom, but for the rest of Europe. This is a potential area for financial crisis with considerable chance of contagion. According to the European Banking Authority (EBA), which is set to move from London to Paris, European banks have reduced their exposure to the United Kingdom since it voted to depart from the EU. The agency noted that EU banks have reduced 350 billion euros of British-related assets from their balance sheets. These are banks from the other twenty-seven EU countries that have cut total assets that would give them exposure to the United Kingdom risk from 1.94 trillion euros to 1.59 trillion euros (between June 2016 and June 2017).

Following up on this theme, the EBA report indicated that the risk of a “cliff edge” Brexit was the most significant worry for European bankers. Indeed, one-third of the banks that the EBA polled for its annual risk-assessment exercise were apprehensive about the legal risks if a hard Brexit occurs. Among the primary concerns for European bankers was legal uncertainty pertaining to derivatives and other financial contracts, data protection and how court judgements might be enforced. The EBA spelled out those risks: “It is important that banks and their counterparts, as well as consumers and public authorities, consider appropriate mitigating actions and contingency plans to address these concerns. These risks may, in the short term, endanger the continuity of cross-border financial flows and services between financial service providers in the EU27 and the UK.”

The issue of legal uncertainty is not just being raised by the EBA. The Bank of England, the UK central bank, has consistently indicated that the large sea of derivative contracts and insurance policies represents considerable uncertainty and potential risks. Something that clearly concerns the Bank of England (BOE) is in the event of a hard Brexit UK banks hold close to £20 billion pounds in total paper value of derivatives with cross-border EU exposure. According to the BOE, EU banks have about the same level of derivative exposure to the UK. Sitting behind these numbers are memories of the massive mess that followed when Lehman Brothers failed, injecting considerable upheaval into global derivatives markets.

Another point of risk from macroeconomic and regulatory standpoints is that a hard Brexit could put European banks under pressure—again. European banks have made a steady march away from the troubled days of the Great Recession that threatened many of their balance sheets, in particular in southern Europe and Ireland. Considerable efforts have been made to recapitalize the most troubled institutions or merge them with stronger banks. According to the EBA the ratio of bad loans fell from 5.4 percent in 2016 to 4.5 percent this year. The problem is that the EBA also points out that a third of EU banks still have nonperforming loan ratios above 10 percent.

The countries with the highest concentration of banks with nonperforming loans are those most affected by the Great Recession—Cyprus, Greece, Portugal and Italy. The last has seen some degree of stabilization in the banking system, but that stability is very fragile. Between uncertainty over a hard Brexit and Italy’s early 2018 parliamentary elections (which could see a hung parliament or a government favoring a referendum to leave the euro), the weakest links in European banking could be recipients of a new round of Euro-bank jitters.

The expectation is that the UK and EU will find a settlement to their differences over what London pays to exit and from that point are able to begin more detailed negotiations on trade and other issues to avoid a UK departure with no deal, a falling off a cliff. However, there has been a stunning lack of progress between the two sides. The EU has taken a tough stance on the UK (as it wants it to serve as an example to other possible members who wish to exit). That said, Berlin, Paris and other EU capitals should be aware that failure to reach a deal can also have a negative impact on their banks and financial institutions (like asset managers and pension funds) through financial contagion. The last financial crisis was in 2008; it would be nice not to see a new one in 2018.