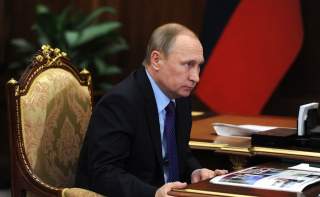 Will Britain’s vote to leave the European Union be a boon for Putin’s Russia? This claim was often repeated during the run-up to the vote and trotted out again in the aftermath of Thursday’s referendum. But it deserves a skeptical eye.

First and foremost, it is NATO and U.S. forces on the ground in Europe that forged peace and continue to guarantee security, not the EU. Neither NATO nor the U.S. in Europe are going anywhere anytime soon.

Yet we’re told that Putin will now run roughshod over Europe following Brexit. This is pure nonsense. A European Union complete with the United Kingdom didn’t stop Putin from attacking Georgia in 2008 or Ukraine in 2014.

It is American and allied military power stationed in Europe and an ironclad collective security guarantee that keep Europe secure, not the bureaucracy of Brussels.

In fact, a United Kingdom free from the European Union should, if anything, be an even stronger security partner for the United States on the world stage. The UK has the world’s fifth-largest military budget, is a founding member of NATO, is a member of the Five Eyes intelligence-sharing community and retains strong bilateral security ties with the United States.

The EU’s drive towards creation of duplicative military capabilities and structures has only detracted from the NATO alliance by siphoning off scarce funds for defense. The EU will no longer be a competitor in the UK for pounds and capabilities best reserved for NATO.

Former NATO Supreme Allied Commander James Stravridis, no fan of Brexit, wrote that “the United Kingdom will have additional ships, troops, and aircraft to deploy on NATO missions because they will not have to support EU military efforts such as the counter-piracy operations off the coast of East Africa or EU missions in the Balkans. They will be able to assign more and higher caliber officers and troops to NATO billets in the Alliance’s command structure – at the moment, many are “dual hatted” into EU and NATO billets or are in EU military structures.”

A UK post-Brexit is also now politically freed from an EU that the United States often clashed with. The UK will undoubtedly seek to strengthen bilateral ties with places such as Australia, New Zealand, Canada and the United States. The United Kingdom can now stand shoulder to shoulder with the United States without having to placate countries on the continent keen to take a softer approach towards Putin’s Russia.

Five of the EU’s now soon to be twenty-seven member states are officially neutral, hardly a firm foundation for transatlantic security.

It’s hard to see how a sovereign Britain, whose economy will emerge stronger in the long term, standing alongside the United States in a reinvigorated special relationship, is anything but a net loss for Putin.

If anything, Brexit underscores the vital role that U.S. leadership plays in European security policy. Serving as the military bulwark of NATO, holding our European friends together over economic sanctions against Russia, continuing to channel support to our friends in places such as Ukraine and Georgia—this is the role of a superpower. This is the role the United States must play, and one it has until the recent past been unwilling to play. The Russian reset was far more of a boon for Russia than Brexit.

Some have suggested Putin’s road in Europe has gotten easier without the UK around to hold more squeamish EU members’ feet to the fire on policies towards Russia. Yet even before the Brexit referendum, cracks were appearing in the EU’s policy with Russia.

In June, European Commission president Jean-Claude Juncker traveled to Russia to attend the St. Petersburg International Economic Forum. It was the first time an EU leader had visited Russia since sanctions were put in place in March 2014. Still more shocking was German Foreign Minister Frank-Walter Steinmeier’s recent description of NATO exercises as “saber-rattling and warmongering.”

The UK’s voice was more often than not drowned out, overruled and ignored in EU institutions. No longer. It is now free to pursue to hard line vis-à-vis Russia’s revanchism—and I expect it will do so.

As for the EU, rather than bemoaning the loss of the UK as a tonic to stiffen the union’s collective resolve, what it should be doing is getting its own house in order. Debt-ridden, protectionist economies can and should be reformed; the EU can and should retain a hard line against Russia’s aggression on the continent.

The idea that Brexit must necessarily lead to Putin cracking the collective will of the EU is anything but inevitable. Why can’t the nations of the EU continue to enact sanctions against Russia, with or without the UK? The security situation has remained unchanged, and the nations of the EU are just as vulnerable Russian aggression after Brexit as before.

Blaming Brexit for a softening stance on Russia is exactly the sort of thing a group of nations with deep business interests in Russia and little stomach for continuing to stand up to aggressive behavior might do.

For the EU, the UK’s decision should be a stark wake-up call. A one-size-fits-all currency, reams of red tape, shortsighted and baffling open-door policies towards migrants, lack of accountability, and the incessant drive towards centralization of power in Brussels have created the fracturing of Europe, not the UK’s sage decision to take back its democracy.

Pro-Russian (and Russian-financed) fringe parties on the continent will supposedly now gain more traction following Brexit. Yet it was and continues to be EU policies and excesses that fueled their growth. A return to policies that promote economic freedom, responsible border control and decentralization of power would do much to extinguish the growth of Russia’s fringe friends in Europe.

Yet I fear the EU will soldier along with chants of ever-closer union, as if the same forces that led to Brexit are now the continent’s only antidote for it. The EU’s immediate decision to exclude twenty-one members from emergency meetings following the Brexit vote leads me to believe my suspicions are correct.

The EU will close ranks and seek ever more political integration—all the while blaming Brexit for problems of its own making, and Putin’s supposed masterful manipulation for its own lack of resolve.

For the UK, the special relationship has a chance to grow stronger post-Brexit. Freed from the EU, it can better assist the United States in the lonely role of world leadership. That would certainly mark Brexit a loss for Putin’s regime.

Daniel Kochis is Policy Analyst-European Affairs in the Margaret Thatcher Center for Freedom at The Heritage Foundation (heritage.org).