Brexit: Heed the Lessons from History 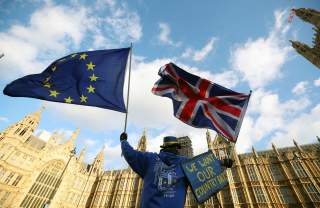 “If Britain must choose between Europe and the open sea, she must always choose the open sea” is a phrase allegedly spoken by Sir Winston Churchill in 1944 to the leader of the Free French, Gen. Charles de Gaulle, who became president of France (1959–1969). Churchill must subconsciously have known his words were contradictory to British foreign policy over more than three hundred years and indeed his own record.

In August 1914 the British government, of which he was a prominent member as First Lord of the Admiralty, declared war on Imperial Germany—not the other way around—because that country violated Belgium’s neutrality.

In September 1939 the British government he was joining declared war on Nazi Germany—not the other way around—because it attacked Poland.

In both cases Britain could have chosen splendid isolation from European power struggles and looked to the open sea. It didn’t. This is, however, precisely what Prime Minister Neville Chamberlain and Foreign Secretary Lord Halifax had in mind in the crucial days of May/June 1940 after the fall of France. As it is so admirably depicted in “The Darkest Hour,” this course was blocked by none other than Churchill forcing Britain to choose Europe instead of the open sea. Both Kaiser Wilhelm and Hitler were flabbergasted that Britain rejected their overtures, repeatedly making their admiration of the British Empire known, conveying that it had nothing to fear from them.

Maybe Churchill was inspired by his great ancestor John Churchill, who was later ennobled as Duke of Marlborough. He ranks among the absolute top military statesmen Europe has ever seen. When the War of the Spanish Succession (1701–1714) broke out, he was as a stroke of luck appointed commander in chief of the British armies on the continent. He displayed remarkable talent. The Dutch were coerced to put their army under his command knowing that if he stumbled their country would lay open for invasion of Louis XIV’s troops. He convinced the Habsburg Empire to join the alliance against France and send their best general, perceived as the best in Europe, Prinz Eugen to command the troops despite facing the Ottoman Empire. Prinz Eugen soon realized that even if he was good, Marlborough was better and showed magnanimity by willingly placing himself under Marlborough’s overall command.

They won four monumental battles. The first one at Blenheim in Southern Germany was superb strategy combined with a tactical master stroke. It resembles Napoleon’s victory at Austerlitz 1805. The French commander, Marshal Tallard, was lured into committing his troops to defend a village, which denied him of room of maneuver thereby nullifying his superiority in number of troops. Marlborough and Prinz Eugen struck at his weakened flank to gain complete and total victory. In quick succession followed victorious battles at Ramillies (1706), Oudenarde (1708) and Malplaquet (1709). Britain’s army was fighting in Europe displaying that its interests and destiny was to be found here. Not alone certainly. A masterly diplomatic game took place to fight with allies and avoid isolating itself.

This could be done because Marlborough had as his support one of the greatest British politician ever, Sidney Godolphin, who from 1702 to 1710 was what in today’s terminology would be prime minister. He worked incessantly to ensure political support, provide financial backing, and make the logistic work. Without him to guarantee England’s commitment to the Europe, Marlborough would not have been successful.

Unfortunately, this did not last. Politicians in England who did not see the necessity of putting England at the heart of Europe managed to get into power and sack Godolphin soon followed by the resignation of Marlborough realizing his endeavors would be futile without firm political support in London.

The new government with Henry St. John—later ennobled as Viscount Bolingbroke—and Robert Harley—later ennobled as Earl of Oxford—as leaders started by asking for a just peace for Britain and its allies They soon realized how wrong they had read the situation. Britain’s allies sensed a shift in policy forcing the new government to assure them that this was not the case.

In fact, it was. It did not take long before Britain initiated separate peace negotiations with France without informing its main ally The Netherlands, their comrade in arms, whose survival depended on the alliance. Worse was to come. In 1712 Oxford and Bolingbroke engineered a royal order to Marlborough’s successor not to use British troops against France. In reality Britain abandoned its allies in the midst of a campaign, leaving them to fight for themselves while looking to secure a peace treaty with France on the best possible terms for Britain.

The Treaty of Utrecht (1713) meant the retreat from Europe despite losses of thousands of soldiers and enormous costs.

Simultaneously with its withdrawal from Europe, England had to implement the Acts of Union (1707), which created the United Kingdom of Great Britain between England and Scotland. It soon became clear that this was no easy task. In 1745 the Jacobite Standard was raised at Glenfinnan starting an uprising against the English. “Bonnie Prince Charlie” rallied the Scots and took his army as south as Derby in England before it was rolled back and defeated at Culloden in 1746.

In a Brexit perspective it is interesting to note that England forced on Scotland a regime and a policy a majority of the Scots didn’t want—again.

In 1746 the revenge of the English was brutal. The clearance of the Highlands meant that a large part of the Scots constituting the clans were herded down to coastal cities and shipped to North America. The forests were felled and wildlife destroyed to be replaced by sheep.

England turned to the open sea, but Europe proved to be the key. Despite initial hesitations Britain intervened militarily on the continent during the Seven Years’ War. Fighting took place in North America and India, but without success in Europe, British victories abroad might come to naught. Pitt the Elder was at the head of the government when the conflict began. He favored engagement on the continent as little as possible using the navy to wage war in North America and India. A course not sustainable. A coalition government was formed between him and the Duke of Newcastle bringing about some kind of balance between war efforts abroad and on the European continent. The Treaty of Paris (1713) showed how wisely it had been not to rely on the open seas and disregard Europe. Military success in both theatres and allies on the continent produced terms giving Britain possession of large overseas territories.

Much has been written about the Napoleonic wars and few will dispute it confirmed once more that Britain was a colonial and imperial power with Europe as the key to maintain and expand that. Tirelessly Britain worked to shape coalitions against Napoleon. Armies were sent to the continent. Vast sums of money spent to keep allies in the coalitions. Long before Germany in both world wars, Napoleon recognized the island vulnerability of Britain. Germany tried to stop goods coming into Britain. Napoleon blocked exports from Britain hurting its financial power thus undermining its capability to subsidize coalitions. This was clever. Despite reducing exports between 1/3 and 1/2 of what it was in the years before the Continental Blockade, he failed for two reasons. Ingenious smuggling combined with inefficient enforcement opened the door. Spain and Russia may have made lip service but were in fact open for British goods. To tighten the robe around Britain’s neck, Napoleon invaded these two countries; that became his undoing. Had the blockade been effective, it is possible that no access to Europe would have grind down Britain’s manufacturing in its infancy and eroded its financial power. It is an interesting observation that in those days the government in London had no reservation about sending a large-scale military force to the continent to secure a market for its goods and access for London’s financial institutions.

In 1878 war threatened in Europe due to conflicts in the Balkans. Chancellor Bismarck of Germany convened the Congress of Berlin to settle the matters. Success was to a large degree achieved through an understanding between Bismarck and the two representatives from Britain, Prime Minister Disraeli and Robert Gascoyne-Cecil (Marquess of Salisbury). There was no tergiversation in London about the crucial importance to Britain of stability on the continent as a background for its global role.

This conclusion was drawn again in 1914 and 1939. Britain’s global role depends on being a European power.

Since the 1700s Britain has at every turn of European history paid a heavy price to be in Europe, realizing that economic, trade and financial links to the open seas are ineffective as a substitute for Europe, but work wonders if anchored in a European commitment.