Brexit Is Just the Beginning of Britain's Problems 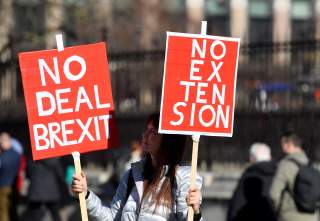 It would take a confident or a foolish person who would say that Brexit is heading for a solution, but here goes. In the next two weeks, the outline of a deal could finally take shape around Prime Minister Theresa May’s Withdrawal Agreement. Moreover, Britain will leave the European Union, perhaps with a short extension.

And then the trouble will really start.

The last few months have seen a spectacular meltdown in British politics. The lack of consensus over Brexit, the inability or unwillingness of its politicians to provide leadership, and the fiasco of failed votes and collapsed initiatives have been hallucinatory for those who think of the country as a place of consensus, stability and order. It is certainly not the case that the country is coming to its senses and we should not get overexcited. But the approach of the deadline for Brexit (March 29) is concentrating minds, as the government has always hoped it would.

There is a reasonable fear on the part of the Brexiteers that they will lose the argument and instead of an exit from the European Union, get a long extension or even possibly a reversal, since the opposition Labour Party now supports a second referendum. That is making them more amenable to a deal. It’s also clear to them that “hard” Brexit without a deal is unpalatable and probably politically impossible, even though some in their ranks would prefer it. So they will need a deal and believe it is better that it be on their terms. The Brexiteers are talking openly about how this could happen, based on May’s Agreement. Meanwhile, the Labour Party may have signaled that it wants a second referendum but their leader, Jeremy Corbyn, would much prefer not to have one. In addition, a significant group in the Labour party would vote for a Brexit deal. So there may finally be a confluence of interests—however temporary or tactical—and that’s one of the things that has been missing so far.

Additionally, it seems likely that sometime soon—maybe even this week—there will be a patch to the Withdrawal Agreement. The substance isn’t clear and is under tight wraps as it is negotiated in Brussels, but the European negotiators specialize in squaring circles, and that’s what’s needed. For the first time, there is also some sense that the Conservative party might have an appetite for a compromise too.

If a new protocol is produced, it could create the basis for a vote in the House of Commons. It may take more than one vote to get there; the House is a feral, spittle-flecked, Hobbesian place at the best of times, and now is not the best of times. It may also take longer to do all the implementing legislation, requiring an extension of the Brexit deadline for administrative reasons.

Furthermore, there will be big remaining political issues and it won’t be easy on Brussels and the European Union member states to compromise either. Many countries think that the EU has already gone too far to assuage Britain’s concerns. As always, nothing’s agreed until everything’s agreed. Most European negotiations end with late night compromises over money and fishing quotas—this will likely be no different.

And then? Once Britain leaves, and the adrenaline of the cliff-edge wrestling has worn off, the real political problems will still be there. Britain has to negotiate a long-term relationship with the EU. To say that there will be no warm feelings is the understatement of the century. It will need to strike trade deals with other countries including the United States. Yet the signals are that London’s attempts to do so will raise very serious issues—the role of Britain’s National Health Service and food standards, for example. At a higher level, the United Kingdom will need to define a new future for itself as a nation. Right now, it is shedding its strategy and it’s not clear where it is now going.

Politically, the battle that will start after Brexit will be critical. Neither of the main political parties loves its leader. In addition, neither party is ready to govern, able to voice a clear direction or make the big, hard decisions that are needed. The tensions within the United Kingdom—with Northern Ireland, with Scotland—will create major issues.

Brexit is as much a symptom as a cause of the problems that Britain faces. The economic crisis of 2008, the aftermath of the Iraq War and the scramble to hold on in a world that is moving away from British interests and values are hard challenges. This episode, like a bitter family row, will not be resolved; it will just be ended temporarily, to resurface in other ways and other places.

By the end of the year, we may see new leaders for both British political parties, further political defections to the new party that is taking shape in Britain’s political center, perhaps an election, and the stirring of independence demands. Brexit may be only the first act in a truly Shakespearean drama that could shift the political and constitutional foundations of the United Kingdom.

Andrew Marshall is vice president of communications for the Atlantic Council.