Brexit: Keep Calm and Carry On 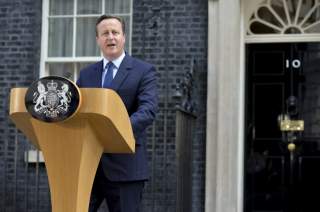 The immediate reaction to the Brexit vote in the international media and financial markets illustrates again the complacency and vacuity of the governing elites of the West. There was never any reason to imagine the Remainers would win on the basis of the piffle that David Cameron brought back from Brussels. He promised “full-on treaty change” in response to decades of mounting British unease over the authoritarian regulation of their lives and occupations, and what he got was a promise by the twenty-six other European Union countries to “consider” British “applications” for the right to vary benefit paid to certain categories of migrants. What Neville Chamberlain brought back from Munich in 1938 was a triumph of diplomacy in comparison. This was always going to be a close race and where the slumbering confidence that Cameron would walk it came from is a complete mystery, other than the resistless addiction of the British political leadership, like their American analogues, to believe what they want to believe.

Though they can be overworked, there are some comparisons with the sacking of the American political establishment. There is the common thread of concern about immigration and trade being mere labels for the importation of unemployment. And there is the resentment of the lassitude and pomposity and disconnection to bread and butter as well as patriotic issues of the ruling elites. But in Britain there is the dangerous issue of surrender of national sovereignty-at least the Americans do not have to retrieve the right of self-government, for which George Washington and his comrades fought for seven years. But it is not fair to say that Britain has had twenty years of misgovernment as the United States has. The United Kingdom did not bring down upon itself and the world the greatest economic crisis in eighty years as the Clinton and George W. Bush administrations did with the housing bubble and the deliberate and enforced issuance of hundreds of billions of dollars of worthless mortgages. Nor have the British squandered scores of thousands of casualties and trillions of dollars in prolonged war in the Middle East that enhanced the status of their strategic adversaries, especially Iran. And Britain has not oscillated between the hip-shooting pugnacity of George W. Bush, and the feckless appeasement of Obama.

But like successive U.S. administrations, the post-Thatcher governments of John Major, Tony Blair, Gordon Brown, and David Cameron have just waffled over Europe, claiming “Europe is coming our way” while allowing 950 years of British political sovereignty to be gradually subsumed into the antidemocratic quagmire of the Brussels socialist superstate. The American leadership made terrible mistakes in almost all fields, and the country kept rotating congressional leaders: Tom Foley, Newt Gingrich, Nancy Pelosi, John Boehner, but did not get better government, and this year 30 per cent of Republicans voted to go well to the right with Ted Cruz, fifty per cent of the Democrats voted to go off the charts to the left with Bernie Sanders, and Hillary Clinton and Donald Trump have only kept the game within the 30-yard lines with fancy footwork. Mrs. Clinton made a left-turn of convenience and Donald Trump rounded up the entire Archie Bunker vote with provocative remarks on trade and illegal immigration while being a centrist in all other policy areas.

In Britain, the last great prime minister, and the greatest peacetime leader the country has had in more than a century if not ever, Margaret Thatcher, was pushed out of office by her own party for warning that precisely what has happened would happen. But her followers never were far away, and her young disciples of thirty years ago, Boris Johnson, Michael Gove and Jacob Rees-Mogg, have taken over (taken back, in fact), the Conservative Party and the UK government. The lady was right from the start, and this is in large measure, her victory. In sum, the Americans have to expel the sclerotic cynics clinging to the furniture and glued to the walls of the great houses of government like limpets, but don't have to wrench back the right to self-government from foreign hands. The British have the leadership required in place and at hand, but they have to disentangle themselves from the corpse of Euro-inertia.

The idiocy of the currency speculators and money managers will subside quickly. The European treaty and the incomprehensibly turgid Constitution of the European Union provide for two years of negotiation. Despite the initial purposeful response of the ciphers in Brussels, who are not elected, are not responsible to the so-called European Parliament or the EU’s constituent nations, and are not answerable to anyone, will cave like jelly to try to keep Britain in. Cameron, having promised to hold a referendum, should have returned empty-handed and led the leave side of the vote while explicitly stating he wanted a mandate to require the substantive changes he had promised. He managed to fumble his way out of a majority he should have won six years ago, got the lucky bounce last year when UKIP took more from Labour than from the Conservatives and the Scottish nationalists cut Labour off at the ankles in that province and Cameron, against the polls, won a majority. In the politics of governing a great nation, you don’t win the grand lottery twice in a row.

Johnson and Gove will govern well and fairly, they will negotiate back the right of the British to govern themselves while retaining a cordial and cooperative relationship with the European powers. All the alarmist ravings about the secession of Scotland and Northern Ireland is bunk; it is like the speculation of a republican ejection of the monarch after the death of Princess Diana. The real casualty is the Brussels tyranny. It has got away with regulating everything down to the slightest details of small businesses-the Germans want to be loved in Europe, and as they are the strongest country in Europe and are accustomed to regimentation, they live with it. The French, Italians and other Mediterranean countries regard almost all politicians as worthless crooks and poseurs and generally ignore all regulations, so they don’t really notice. The little countries see Europe as the way for their own leaders to become powerful by assuming high positions as compromise choices between the large countries in the pan-European government. The British don’t like it, but were drawn in because they thought the Euro-train was leaving the station and they had to get on board.

They ditched the Commonwealth and made the total-immersion jump into Europe with Edward Heath in 1972. Margaret Thatcher placed all her bets on the special relationship with the U.S. and she and Ronald Reagan led the West (with John Paul II, Helmut Kohl, Canada’s Brian Mulroney and a few others) to victory in the Cold War. That relationship was strained by the errors of George W. Bush, and cracked completely with Obama, who has no interest at all in Britain, (and whose patronizing and outrageous intervention in the Brexit vote was even less effective than David Cameron’s lobbying of U.S. senators in favor of the egregious nuclear agreement with Iran). American Democratic administrations have always misjudged issues of Britain and Europe. Kennedy tried to subsume British and French nuclear forces into NATO under American command, Carter and Clinton and Obama have all been desperately trying to push Britain into Europe, from a glib, ahistorical reflex that it would make everything less complicated.

Brussels has been exposed in its infirmity. A common market will remain. The Euro-federalists will group around Germany (Austria, Netherlands, Czechs, Poles, and Baltic and Scandinavian countries except Norway), and adopt or retain the Euro. The Mediterranean countries, including Portugal, will desultorily follow France, which will be less dyspeptic with a change of government next year, And the East European countries will advance toward one of the blocs at the best speed they can attain. Britain will revert to measured cordiality, balancing interests as it has done since the rise of the nation state in the time of Henry VIII, invoking American assistance as it did in the last century, if the European balance tilts dangerously. This is unlikely now, in a nuclear age and with a relatively content and placatory Europe.

If Britain really does leave Europe, the economic consequences will be neutral all round, though the United Kingdom will be stronger without the dead weight of Euro-Danegeld as placebos to labor and small farmers (for notorious historic reasons). The hysteria of the last few days will pass like a summer shower. Britain, as it has often before, is leading Europe out of a well-intended cul-de-sac of undemocratic socialism to a future that works.