Brexit Is a Vote on UK Identity 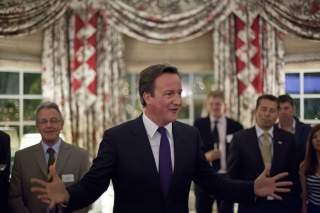 In the spring of 2007, I was working as an intern for a conservative talk-radio host when a mild panic broke out. President Bush was hammering together a partnership agreement with Canada and Mexico, which, in the imaginations of our more hucksterish guests, became a secret charter for continental integration. The phone lines promptly melted down over this incipient “North American Union,” and popular conservatism hopped another lily pad towards the fever swamp in which it finds itself today.

Actually, maybe that’s being unfair even to the Trumpist right. Those listeners might have been mistaken, but their fury had plenty of precedent. We Americans have long recoiled at any attempt to undermine our sovereignty. As Boris Johnson, the newfound blond bombshell of Euroskepticism, noted in an op-ed for the Sun, “The US guards its democracy with more hysterical jealousy than any other country on earth.” That’s why Johnson was correct to protest President Obama’s recent intervention on behalf of the “Remain” campaign in Britain’s looming referendum over its European Union membership. Obama was asking the UK to endorse something that his own country never would.

The president’s warning to the British was preposterous: vote to depart the EU, he threatened, and Britain would be muscled “to the back of the queue” for a trade deal with America—as though he would be diligently haggling with the Congo delegation while London shivered out in the cold. But his remarks were also concordant with the tenor of the argument in the UK, which has been nothing short of hysterical. The “Remain” side has spent its time warning of economic apocalypse if Britain vacates Brussels, with Prime Minister David Cameron squealing last week about “a bomb under our economy.” Meanwhile, Johnson has compared the EU to Hitler.

This scaremongering has shortchanged the British people, who are wrangling with the most significant issue that’s confronted them in a generation. Polls have consistently found voters evenly divided for a reason: the question of Brexit has no easy answer. Lawmakers have portrayed it as a policy debate of economic projections versus immigration levels, which it is, but there’s also a deeper cultural dimension at work. The Brexit issue penetrates to the heart of the British identity crisis, which began after empire and proceeded through Suez, Reagan-Thatcher and the Iraq War, to the present day. Winston Churchill was right when he declared Britain an anomaly, one that was “in Europe but not of it.” But does its future nevertheless lie with the continent? Or across the Atlantic, with the United States—the “special relationship” that Churchill envisioned?

The timber of that relationship is our shared language, to the extent that it is shared. Oscar Wilde, perhaps anticipating George W. Bush, once teased, “we have really everything in common with America nowadays except, of course, language.” Wilde, who traveled extensively in the United States, was fascinated by his transatlantic cousins—he contrasted their capitalism with stuffy English aristocracy in The Canterville Ghost and mocked their puritanism in A Woman of No Importance. Even in the nineteenth century, the Anglo-American relationship occupied a deep layer of British consciousness.

Post-Suez, the fascination took on a melancholy defeatism as the balance of the relationship shifted and America displaced Britain as the world’s preeminent empire. This was Roger Micheldene in Kingsley Amis’s 1963 novel One Fat Englishman, traveling to America only to find himself both impotently bitter and utterly humiliated. Then, during the Iraq war, the inferiority complex gave way to anger and Hugh Grant told an overbearing American president to shove off in Love Actually.

Americans also feel a kinship with the British: we devour their television, quaff their scotch, relish their tart humor and venerate their royal family more than they do. But the Anglo-American rope as of late is less intertwined with our national identity than with the UK’s. Ask about the special relationship during the Bush administration, and most Americans answered in security terms: Britain the ally, Britain the intel partner, Britain the willing warrior in Iraq. Margaret Thatcher said of the Libya bombing in 1986: “It made America realize that Britain was her real and true friend when they were hard up against it and wanted something, and that no one else in Europe was.” That encapsulates our understanding of the alliance in the 2000s—George W. Bush wanted something, Tony Blair acceded, Jacques Chirac refused. Not surprisingly, by the end of his premiership, Blair was being ridiculed in Britain as a poodle for the White House.

The problem was that the Iraq War turned out to be a calamity, one the British believed was owned by America; since then, the security dimension of the special relationship has frayed. Cooperation between our two countries is still strong, thanks to the bedrock institutions built during the Cold War and that ever-durable common language, but whereas dissing the relationship was once unthinkable, today faceless American officials openly deride it while President Obama publicly bashes Cameron as a free rider in the pages of the Atlantic. From the American perspective, Britain’s role seems increasingly like that of a junior partner, as its defense spending threatens to drop below NATO’s permissible floor. The British perspective is less decisive, with sentiments running hot and cold depending on who you talk to. There is, however, a strong aversion in UK public opinion to any more of Washington’s foreign wars.

But even if the transatlantic bond has become a noncovalent one, that doesn’t mean the British have any great affection for Europe. A YouGov poll from 2014 found that only 17 percent of the British feel strongly European, compared to 33 percent of French and 43 percent of Germans. Despite the EU, there are still those geographic, linguistic and historic differences—one of Hemingway’s narrators quotes an Italian colonel saying, “You, a foreigner, an Englishman,” and adds himself, “(any foreigner was an Englishman)”—along with Britain’s longtime status as a hotbed of anti-EU sentiment. Contrary to four-alarm headlines about how British Conservatives are lethally riven over Brexit, today’s Tory divisions are nothing new. Europe contributed to Margaret Thatcher’s fall, destroyed John Major and now dogs Cameron.

There’s also the matter of liberalism, which has influenced the West generally, but is especially peculiar to America, with its constitution, and to Britain, with its Magna Carta and the mother of all parliaments. Unlike, say, France, the 1980s fumigated Britain of much of its politically viable socialism (the flailing Jeremy Corbyn notwithstanding), and neo-Putin authoritarianism hasn’t found a foothold there either. These liberal antibodies are why, even though Greece is more economically straddled and Germany is more haunted by immigration, aversion to the super-statist EU courses strongest through British veins.

Elsewhere in Europe, anti-EU sentiment is often inseparable from antiliberalism, as with Hungary’s Viktor Orbán, whose soft Euroskepticism is premised on a rejection of individual rights. But in Britain, it’s the Euroskeptic critique that sounds most liberal, promising deliverance from choking bureaucracy and the European Commission’s antidemocratic machinations. While most European populist parties are economically nationalist, the UK Independence Party (UKIP) is more in line with small-state Thatcherism. “Completely and utterly,” replied UKIP chief Nigel Farage when asked on Fox News if he was a libertarian. Indeed, the chain-smoking Farage and insouciant Johnson embody libertarianism, not because they’re Austrian economists, but because they harken back to a time when you could get a pint at a pub and talk openly about immigration unmolested by the nanny state.

At its core, that isn’t libertarianism or liberalism per se, but rather a nationalism that, being British, necessarily contains components of both. This nationalism is the real driving force behind Brexit. If one had to crudely sum up the rationale behind Brexit, it would be: We’re tired of the world’s migrants, Europe’s meddling and America’s wars, so why not assert ourselves for a change? Brexit doesn’t mean Britain is sliding one way or the other on some linear America-Europe scale. It means it’s opting for something entirely divergent because the usual choices have been found wanting.

In that sense, they’re becoming more like us, viewing their country less as part of a regional neighborhood and more as a global power broker. They’re also in line with many other first-world peoples, who are rejecting decades of global consolidation in favor of something smaller and more nationally grounded. Good on them for harnessing a nationalism that’s relatively responsible and liberal. Good on them, too, for inducing some urgency in the moth-chewed functionaries of the European project, who have produced the most sluggish economic growth outside of the Ross Ice Shelf. But nations do tend to glom together, and the question following a hypothetical Brexit is in what direction Britain will gravitate. Surely they’ll always remain tethered to Europe and the United States, but Cameron has also hailed a new “golden era” in trading relations with China.

Whatever happens, a Brexit vote isn’t going to send Little Britain drifting away towards Greenland, as many alarmists claim. The UK will remain a world power, one of the economic pillars of Europe, a key player in NATO, a seat on the Security Council and a member of the Five Eyes. Rather than meddling in the debate over the EU, a British matter for the British to decide, Obama should work on mending the transatlantic friendship that he’s been so quick to upbraid. The special relationship is worth preserving—regardless of whether Britain continues sending representatives to Brussels.