Brexit Will Be Britain's Never-Ending Story 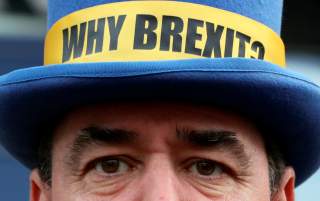 At the end of this month, Britain will formally leave the European Union (EU). Regardless of whether Big Ben “bongs” in celebration of the occasion, there will be a shared sense of relief that the long-running and rancorous debate over how to move ahead with Brexit is coming to a close. Even those who have steadfastly opposed Britain’s exit from the EU will surely be glad that, at last, the national conversation can now take a new and more hopeful turn.

But “Brexit Day” will provide only a momentary reprieve, if it brings even that. The reality is that leaving the EU is a process, not an event. On February 1, Britons will still awake to newspapers that are filled Brexit-related headlines. And while Prime Minister Boris Johnson will no doubt claim to have made good on his recent promise to “get Brexit done,” his government must nevertheless spend the rest of this year hammering out a permanent relationship between London and the EU. It will be impossible for Johnson to carry out this immense task without inviting severe criticism from domestic groups across the political spectrum. And all of this before the economic impact of leaving the EU has properly begun to be felt.

It is sometimes overlooked that the withdrawal agreement that will be ratified by the British Parliament in the coming days—the result of three-and-a-half years of torturous wrangling—only goes partway towards extricating Britain from the EU. While the agreement settles some of the big questions pertaining to Brexit, some of the most contentious and consequential issues have been left unaddressed. Instead, an eleven-month transition period (during which Britain remains subject to most of the EU’s economic and legal rules) is supposed to provide an opportunity for the two sides to work out the details of their future relationship.

Johnson has said he will not agree to an extension of this transition period, and that a final compact between Britain and the EU must be concluded by the end of 2020. If there can be no deal reached during this short timetable, then Britain will simply cease to have any treaty relationship with Europe whatsoever—the so-called “hard Brexit” outcome that so many in Britain have worked assiduously to avoid for the past few years.

It was once assumed that the biggest stumbling block to a permanent Anglo-European agreement would be if London asked for special treatment in the economic sphere. For example, there has been some suggestion that Britain could ask to remain inside the EU’s customs union as a full participant and not a mere rule-taker, or that London could seek some of the benefits of the European single market—namely, the unfettered movement of goods, services, and capital—without accepting the responsibility of allowing the free movement of people. Such positions would be unacceptable to EU leaders, who have no reason to indulge in British exceptionalism.

Yet Johnson’s government has recently signaled that it will not press for special economic access. According to Sajid Javid, Britain’s treasury minister, London’s negotiating team will seek neither membership of the customs union nor the single market. In practical terms, this means that Britain will give up access to the EU’s vast array of international trading relationships in exchange for the ability to pursue its own, independent commercial policy; and that the British economy will “diverge” from those on the continent, as goods and services on either side of the English Channel are subjected to entirely separate sets of regulatory standards.

Pursuing a foreign economic policy of divergence will certainly make negotiations with the EU much simpler to navigate. But such an approach will come at the cost of frictionless trade with Europe—a hefty price tag indeed, given that British firms currently do around half of their total business in the European marketplace. As Javid acknowledges, the ensuing period of adjustment will not be pretty. Companies will have to change how they do business, and with whom; in all likelihood, prices will rise, jobs will be lost, and living standards will decline.

Hellbent on delivering a clean break with Europe, Johnson and his political allies seem willing to impose these economic hardships upon Britain as a necessary evil. They are wagering that massive amounts of public spending can buoy the British industry and that a jingoistic sense of pride in “going it alone” will give voters something to cling onto. It remains to be seen, of course, whether the British public will swallow the costs of Brexit quite so happily as their leaders.

There are other areas of cooperation that must be addressed, too, although none will resonate quite so much in domestic politics. As a member of the EU, Britain has closely coordinated with twenty-seven other countries on issues such as security, policing, and intelligence; fishing, agriculture, and consumer protection; public health, the environment, and energy; and much, much more. In some cases, British policy bears the indelible imprint of a staggering forty-seven years’ worth of collaborative decisionmaking with Europe. Finding new arrangements that satisfy the domestic appetite for national independence while also safeguarding the myriad benefits of pooled sovereignty will be a complex endeavor, to say the least.

To be sure, Johnson enjoys a strong hand in the domestic sphere by virtue of his handsome majority in the House of Commons. On paper, he is the most powerful British prime minister since Tony Blair. But divisions in the Conservative camp may yet re-emerge, especially if the prospect of a no-deal Brexit rears its head as the transition period nears an end.

In any case, there are other political players and institutions outside of London who will clamor for a say on the outcome of Brexit. The Scottish government is demanding a fresh referendum on the breakup of the United Kingdom, for example, and both unionists and nationalists in Northern Ireland are wary of what London might try to push through. Meanwhile, Johnson entertains ambitions of not just holding onto the electoral gains made by his Tory Party in last month’s election, but also expanding the Conservatives’ reach into traditional, working-class Labour heartlands.

Managing all of these considerations simultaneously will be a difficult task, made worse if the country slips into an economic or political crisis. What is clear is that the European Question cannot easily be “settled.” Certainly, eleven months will not be long enough to find a set of permanent arrangements that find broad support across the British polity. After all, Britain was a leading power inside the European project for nearly half a century and it did nothing to extinguish the simmering nationalist sentiment that, in June 2016, spilled over and set the country on the path of leaving the EU.

So yes, Britain is formally leaving the EU at midnight on January 31. But no matter how sweet this moment will be for hardened Euroskeptics, it will only be the beginning of a process that has no real end in sight. If this is the story of Britain’s independence from Europe, then it will be a never-ending story—the same old struggle over the proper relationship between Britain and its nearest neighbors, only this time unfolding on the outside.